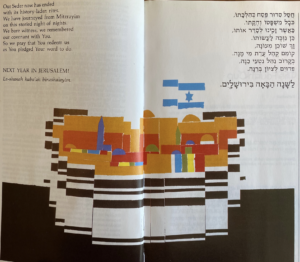 Pages from a 1982 Haggadah published by the Conservative Movement’s Rabbinical Assembly.

Teen Vogue, the fashion magazine, has published a 1200-word essay attempting to educate teen readers about Passover. (What Is Passover? Meaning and Traditions of the Spring Jewish Holiday, April 13, 2022.) The article commendably discusses foods that are prohibited on Passover, the length of the holiday, and the fact that Jews may have one or two seders.

But there’s a big omission.

Jewish families follow a script called the Haggadah, which means “the telling.” A Haggadah is often chosen to fit a family’s interests, with themes including environmentalism and global justice, and many families opt to create their own.

Throughout the Seder, the Haggadah outlines readings, the ritualistic drinking of four cups of wine, the consumption of symbolic foods, and singing. One notable tradition observed in tandem with the Seder is to fill an extra cup of wine (and for some, to open the door) for Elijah, a prophet who — according to superstition — visits every Jewish home on Passover to witness each celebration. Think of Elijah as a Jewish Santa Claus, but instead of material gifts, he delivers a promise that the messiah will arrive one day to bring the world peace and justice. 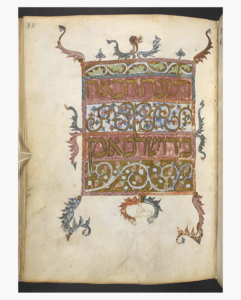 Page from a 14th c. Haggadah from Barcelona, now in the collection of the Metropolitan Museum of Art. The Hebrew text translates to, “Next Year in Jerusalem, Amen.”

Setting aside the issue of the appropriateness of the Elijah/Santa Claus comparison, what’s missing from this description ought to be obvious to anyone who’s ever sat painstakingly through a long seder, waiting for the end. For centuries, Jews around the world have concluded their seders by proclaiming, “L’Shana Haba B’Yerushalayim!” Next year in Jerusalem!

Teen Vogue has a long history of publishing biased articles against Israel, so it’s hard to see this omission as merely a well-intentioned mistake. By trying to strip the Jewish religion of its connection to Jerusalem and Zionism, Teen Vogue is miseducating its young readers, and does a disservice to its Jewish and non-Jewish readers alike.