On Wednesday, July 2, just before noon, a Palestinian construction worker from East Jerusalem ploughed a bulldozer into everything in sight. Reportedly shouting “Allahu Akhbar,” he overturned buses and crushed cars with their occupants, attempting to kill as many people as possible before himself being shot dead by security officers. At latest count, three Israelis were killed and 66 people were wounded.  A 5-month-old baby girl was saved from a car where her mother was crushed to death.

This was understandably the top story on news Web sites around the world, and a look at the headlines tells a disturbing story about  the approach of some media outlets toward Palestinian terrorism.

But among some headline writers on European-based news websites,  the approach was different.

“At least 3 die as man uses earthmover in Jerusalem attack”

The perpetrator is identified only as a “man”; there is no mention of the killer’s Palestinian identity. All aggression is erased in this vague headline essentially mitigating the terrorist action. Even the term “bulldozer” with its connotation of toughness is exchanged for the milder, more innocent-sounding “earthmover.”

London’s Independent similarly removed the identity of the perpetrator in the murders, with the following headline:
“Israeli Digger Attack: Eyewitnesses Describe Terror.”
The headline is so vague as to suggest that an Israeli was the culprit.

HonestReporting.com captured screenshots of the original BBC website headline and a caption on its television coverage before they were amended by the news organization. The headline read “Israel Bulldozer Driver Shot Dead,” focusing on the terrorist who was shot dead and turning him into the victim instead of those he murdered. 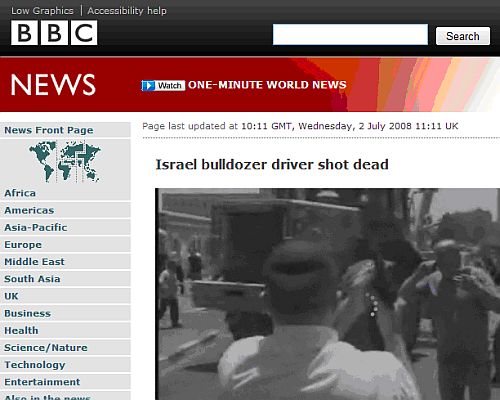 As HonestReporting points out, “The BBC can have no excuse for not having the basic facts of the story in front of them from the very beginning” since their own reporter was an eyewitness to the rampage. The amended headline “Deadly Jerusalem bulldozer attack,” while not as stark in its implication, similarly mitigates the responsibility of the Palestinian terrorist. Typical of the sort of headlines that CAMERA has critiqued in the past, these display the BBC’s penchant for painting Israel as the perpetual aggressor while downplaying or ignoring entirely Palestinian responsibility for terrorism.  (See “A Look at BBC’s Headlines, June 1, 2001 and “Double Standards in Headlines,” October 1, 2003)

Wasting no time, the Guardian posted an online opinion column by Seth Freedman exemplifying that media outlet’s perspective. The focus was, of course, not on the Palestinian terror attack and its victims but was a condemnation of Israel for its reaction to terrorism and for ostensibly causing Palestinian terrorism.

Entitled “The inevitable overreaction,” the column castigates “the usual suspects [Israeli politicians]” whom, Freedman writes “were quick to voice their rage at the events within minutes of the carnage unfolding, and bubbling to the surface were precisely the wrongheaded, knee-jerk reactions that have led the region to such a bloody impasse.”

Who is the real culprit to blame for such terror attacks?  No surprise there, as Freedman articulates a view to which the Guardian’s readers have become accustomed.

Besieging Gaza has turned the area into the most fertile breeding ground imaginable for jihadists and suicidal militants; daily raids and round-the-clock curfews have done the same in Palestinian cities the length and breadth of the West Bank….Occupation breeds terror… Because when we crush their civilians’ lives and livelihoods, the chances are that the radicals among them will do the same to us.