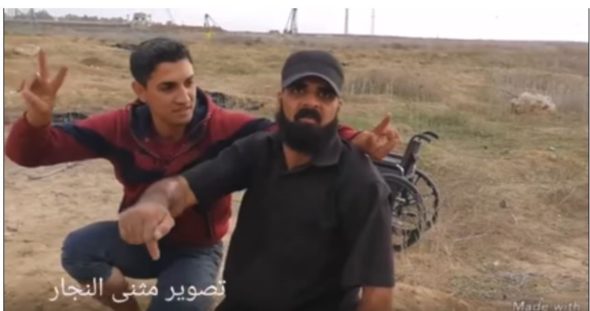 On Dec. 15, 2017, Ibrahim Abu Thuraya, a double amputee, was killed near the Gaza Strip border’s border with Israel during violent clashes with Israeli forces. Palestinians claimed that he was killed by an IDF sniper, but CAMERA’s new in-depth examination raises many questions about the version of events released by Palestinian news sources.

CAMERA previously examined other aspects of the Abu Thuraya story, prompting numerous media corrections regarding both the unclear circumstances of his death and how he lost his legs. (Archival video located by the Associated Press revealed that the latter occurred in the course of his participation in clashes against Israeli forces, and not during an Israeli airstrike, as his family had claimed.)

Presspectiva, CAMERA’s Hebrew department, highlighted videos filmed shortly before Abu Thuraya joined the riots at the fence  in which he  declares his desire to die “as a martyr.”  Also pointed out was the absence of any photos of Abu Thuraya’s injury right after he was shot, despite the abundance of images released of the incident.

In March, the IDF published the findings of its investigation, which concluded that soldiers had halted their fire at least one hour before the time the Palestinians claim he was shot.

Presspectiva has since then found more discrepancies in the information provided by Palestinian news sources, raising additional questions about Abu Thuyara’s death.

The first video was published on the Shehab News Agency’s  Facebook page on December 15, 2017, the day of Abu Thuraya’s death. The video appeared under the headline: “The moment of the martyrdom of Ibrahim Abu Thuyara by the bullets of the occupation east of Gaza“:

In this video, Abu Thuraya  is first seen in a wheelchair with about three other men next to him.  He is then seen being carried away, supposedly right after he was shot.

The sun appears low in the sky, and the sky is dark, suggesting the time of day to be late in the afternoon, or dusk. The people surrounding Abu Thuraya are wearing long sleeves and sweatshirts or jackets. Abu Thuraya  is carried by a man in a long sleeved shirt and black hat,  assisted by a man with a beige vest, dark shirt and jeans.  Neither are wearing glasses. They are accompanied by a large throng of men shouting loudly and indistinctly. (Click on images to enlarge.) 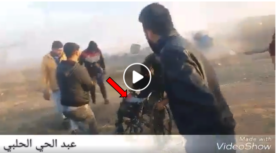 A second video was published on Shehab’s Facebook page  the following day,  Dec. 16, with the headline: “He waved the sign of victory [i.e. signalling “V” with his fingers] and died a martyr’s death… the moment of martyrdom of the amputee Ibrahim Abu Thuraya by the bullets of occupation that hit his head during the Friday of rage.”

This video shows a completely different scene: Here, the weather is sunny and clear rather than dark, and the crowd is not as large, made up mainly of younger people wearing short-sleeves rather than long sleeves and jackets. The film begins with Palestinian paramedics in uniform running from the camera, followed by a man carrying Abu Thuraya in his arms who appears to be wearing the uniform of a paramedic, i.e. short-sleeved white shirt and red pants.  He is wearing sunglasses and no hat. The young men accompanying Abu Thuraya and the paramedics have taken up a high-pitched, distinct and repetitive chant of “Allahu Akhbar” as opposed to the indistinct loud shouting in the first video.

Although Abu Thuraya apparently just took a bullet to the head, he keeps his head raised and lifts up his hand and fingers to mark “victory.” On the center of his forehead there is a red stain, an apparent injury. The medic places Abu Thuraya in the ambulance and then bandages his patient’s forehead.  (Click on images to enlarge.) 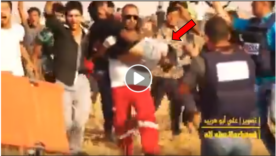 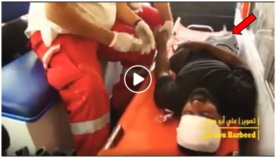 In contrast to the first video,  the second video appears to show the head injury that reportedly caused Abu Thuraya’s death. According to Palestinian Red Crescent documents, the wound was located above his left eye.

In the video, however, there is no sign of injury over Abu Thuraya’s left eye and only a single, large red stain visible on the middle-upper part of his forehead. In a further discrepancy, a photo released of Abu Thuraya at his funeral shows two distinct spots of red over both eyes –  a concentrated, more intense spot over the left eye and longer, lighter streak over the right. The following are comparisons of the wound in the second video (photos on the left) and the picture from the funeral (photos on the right).  The difference in the wound’s location is clear. There is no trace on the funeral photo of the injury that is visible in the video  and  vice versa – no trace on the video of the apparent injuries in the funeral photo. This raises serious questions about the credibility of one or both images.(Click on photos to enlarge)

The IDF investigation concluded that sniper fire had ceased at least an hour before Abu Thuraya was reportedly hit. Two separate videos claim to show the moment Abu Thuraya was “martyred” by Israeli troops. But discrepancies in the time of day the purported event took place, the weather at the time, and the number and identity of participants, suggest two entirely different scenes.

The two videos ostensibly show the injury that caused Abu Thuraya’s death, but only in the second video can the injury be clearly seen. A comparison between the apparent site of the injury in the video and  that in the funeral picture –  show two different locations.

Questions that are raised inlclude:

This incident extends beyond the personal case of Abu Thuraya. It demonstrates a propagandist mechanism of staging the injuring and killing of a person who eagerly anticipates his martyrdom and views it positively as his contribution to a campaign against the Jewish state.

A video in which Abu Thuraya climbs on an electric poll to hang the Palestinian flag indicates that he and the riot’s organizers understood the potential impact of this man’s death in affecting public opinion. His death was inevitable. Beyond the question of exactly when and how Abu Thuraya died, is the question of  how many other ‘Abu Thurayas’ are out there, and how many others will be sacrificed in the future.

This post was updated on July 4 to remove references to Islamic burial practices. Due to an editing error, a previous version of this post did not take into account specific Islamic laws addressing the burial of shahidim (martyrs), as opposed to those who died from other circumstances.