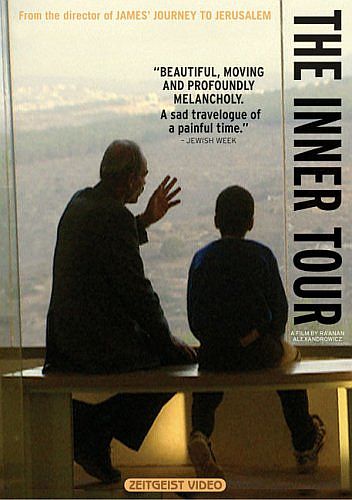 “The Inner Tour” follows a group of Palestinians on a three-day bus tour in Israel. Each member of the group is said to have lost a family member to death or imprisonment because of Israel.

Each participant recounts his or her tale of personal loss. Israelis are depicted as interlopers and colonizers. The speakers express their bitter perception that Israel is trying to supercede them and obliterate their existence. While the film’s depiction of these stories is cinematically compelling, it is entirely one-sided and lacking in context. By narrowing his focus to the personal feelings of the travelers and injecting no corrective commentary, challenge or background information, the director gives viewers a severely skewed picture of a complex and difficult subject.

Palestinian dispossession and Israeli takeover are the motifs that connect each of the scenes on the tour. Some of the Israelis encountered appear strikingly callous. For example, during a visit to Kibbutz Hanita, one of the Jewish founders of the community shows the group around a museum that documents the efforts of the early pioneers to defend themselves against gangs of Arab attackers. The scene emphasizes how the Palestinians feel degraded by the tour guide’s insensitive depiction of the Arabs. In presenting the episode from the Palestinian vantage point, the film shifts the story of Hanita’s founding from one of Jewish renewal and determination in the face of violent opposition (two kibbutz members were killed on the first day of its founding) to one of Palestinian alienation.

As the bus crisscrosses Israel, the visible achievement and modernity of Israel overwhelm the Palestinian travelers who view Israeli development of the land as a foreign intrusion. The visits to Haifa, Tel Aviv and Jaffa appear to sharpen the tour members’ resentment and envy over what they believe was taken from them. And as though Israel weren’t in reality one of the tiniest nations in the world, the filmmaker presents panoramic views of Tel Aviv to create a perception of immensity.

While the film conveys a deep sense of Palestinian heritage and attachment to the land, it offers no mention of Jewish historical ties to the area. One member of the group shows a picture of his home that he claims was taken by a Jewish family. The eldest member of the tour, Abu Muhammad Yihya, tells of how he fought the Jews and then fled with his family in the face of Jewish attacks in 1948. There is no discussion of Arab responsibility for launching the war, nor, of course, of the huge losses in Jewish life in that struggle.

In the last scene, Abu Muhammad–apparently “by chance”–happens to locate his childhood home in Anabu alongside the highway on which the bus is traveling. He wanders from the bus up a hill where he stumbles on the remains of a building and certain vegetation he says he recalls. At a mosque in Haifa, it is also Abu Muhammad who articulates the Palestinians’ refusal to put resentment behind: “Years and days pass and for us time stands still.”

While Abu Muhammad’s nostalgia may be understandable, there is no discussion as to why second, third and fourth generation Palestinians continue to cling to this irredentist sentiment when so many other people the world over, including most Israelis, have left behind the homes of their fathers or grandfathers and built new lives. There is unsurprisingly no mention of the destitute Jewish refugees driven from their Arab homelands, whose numbers in the hundreds of thousands likely exceeded those of Palestinian refugees. The film makes no attempt to explain why a beleaguered Israel was able to absorb those Jewish refugees, while the vast surrounding Arab states blocked any effort to absorb and resettle the Palestinians.

“The Inner Tour” provides an image of Palestinian nostalgia and loss that stirs natural feelings of compassion. American and European viewers may be reminded of injustices heaped upon native peoples from their own history. But these comparisons are erroneous because they distort the true historical context and circumstances in the Middle East.