The National Press Club bills itself as a “professional and social club for working journalists and communications professionals,” proudly describing itself as a “Washington institution.” Such claims are not overblown. The NPC has been around for more than a century and has been a fierce advocate for freedom of speech and the press. All of this makes the Club’s decision to hide details about a recent Palestinian terrorist attack more disturbing.

“We are calling attention to another shooting of a Palestinian journalist by Israeli Defense Forces (IDF). The killing of Ghufran Hamed Warasneh, a radio presenter who was commuting to work requires a full and fair investigation. This tragic event follows the fatal shooting last month of Palestinian journalist Shireen Abu Akleh. Shireen was also an American citizen and the Club has called for an impartial investigation into her case as well.”

Yet, NPC’s statement failed to note that Warasneh was more than just a “radio presenter who was commuting to work.” She was also armed with a knife and reportedly trying to attack Israeli soldiers.

“A Palestinian woman armed with a knife approached a soldier stationed in the southern West Bank before being shot and killed, the Israeli military and Palestinian health officials said Wednesday morning. The Israel Defense Forces said in a statement that the woman was holding the knife in her hand as she neared a soldier close to the Al Aroub refugee camp, south of Bethlehem.”

The Times of Israel even obtained pictures of the knife that was found at the scene. Further, Israel’s Channel 12 news noted that Warasneh had “attempted a stabbing attack in the past” in Hebron.

NPC’s failure to report this crucial information undercuts its pretensions to advocate for professional and responsible journalism. Instead, the Club sought to paint Warasneh in starkly sympathetic terms, noting that Warasneh “worked at various news outlets before landing her current job at Dream” where she was “on her third day at that job when she was killed.” NPC even uncritically quoted Warasneh’s mother who “reported that she was apprehended by Israeli authorities in January after coverage of a pro-Palestinian march and held for three months in custody.”

One of the oldest and most prestigious journalism associations in the United States would like people to believe that Israeli soldiers are, without cause, intentionally shooting journalists “in the chest while [they’re] being questioned.” NPC seems to believe that when the Jewish state isn’t gunning down journalists, it is locking them up for merely covering peaceful marches. What utter nonsense.

It is curious, and revealing, that the National Press Club seems so willing to believe the absolute worst about the Jewish state. And it is equally revealing that NPC failed to disclose that she was armed and a “former security detainee” who was held not for reporting on a protest but for an attempted stabbing. At its most basic level, journalism is supposed to cover the “who, what, when, where, why and how.” But in its brief statement NPC failed to live up to the standards of its profession. Indeed, by omitting relevant details, the Club actively misled.

It is a curious “journalist” who is armed with a knife and has a history of stabbing attempts. But it is far from the only instance of the press conflating anti-Israel terrorists with journalists—a practice that not only defames the world’s sole Jewish state, but which also endangers actual journalists.

In May 2021, the IDF carried out a strike on a building that housed the Associated Press, al-Jazeera and Hamas. AP is, of course, a U.S. news outlet. Al-Jazeera is, effectively, Qatari state propaganda. Hamas, however, is a U.S.-designated terrorist group that calls for Israel’s destruction and which was then engaged in a war with Israel.

Hamas was reportedly using the building for intelligence gathering, among other activities. Yet in a May 2021 column, the Washington Post’s Jason Rezaian equated the genocidal terrorist group to a “free press.”

Rezaian’s article was titled, “What happens when allies like Israel don’t respect a free press?” And when shared on social media, it had an even more absurd headline: “Israel’s attacks on the free press in Gaza are a problem for the Biden administration.” A terrorist group was using journalists as human shields—and the intrepid Post columnist sought to blame Israel.

Rezaian didn’t blame Hamas. Indeed, he didn’t tell Post readers that Hamas was operating out of the building until the very bottom of the article—and he cast it as merely an Israeli “claim,” failing to note the abundance of evidence, including statements from former AP reporters themselves, that strongly indicate that Hamas shared office space with the Associated Press.

Not for the first time, the media excludes details and facts to fit a narrative. And that narrative is simple: the Jewish state not only wants to silence “free speech,” it is willing to murder to do so. If implicitly, it is another take on undue and pernicious Jewish influence—which is to say, it is emblematic of antisemitism.

This narrative was readily apparent with the death of Shireen Abu Akleh, an Al-Jazeera employee who was tragically killed during a gunfight between the IDF and Palestinian terrorists in Jenin on May 10, 2022. Within hours of her death and before important details were known, two Washington Post staffers took to Twitter to blame the IDF for Shireen Abu Aklah’s death. As the journalist Armin Rosen observed, the two Post employees spread “what amounts to a conspiracy theory” before all of the facts were in.

One, Rana Ayyub called it a “murder in cold blood.” She added: “Shireen was one of those journalists who documented the everyday brutality of Israeli forces.” Karen Attiah, a Post columnist who has previously published antisemites and Hamas apologists like Jamal Khashoggi and terrorist groups like the Houthis, retweeted Ayyub’s accusation. 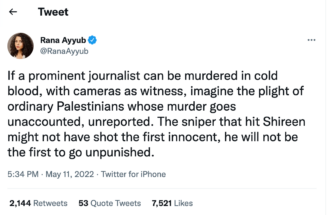 Yet there was no evidence for Ayyub’s claim of a targeted assassination. And subsequent attempts to bolster the libel, including most notably by CNN, have been thoroughly debunked by CAMERA.

As CAMERA pointed out to Post staff, including executive editor Sally Buzbee (previously the head of AP), Ayyub’s tweet violated the stated standards and ethics of the Washington Post, as well as its social media policy. After several emails Ayyub deleted her tweet—but she never apologized. Indeed, other similar tweets of hers remain. Nor did the Post issue a correction. Another violation of their stated standards.

The willingness of some reporters to conflate terrorists with journalists is not merely libelous. It also emboldens terrorists to pose as, or use, journalists. In the 2018 Hamas-orchestrated “Return March,” in which armed terror operatives interspersed with civilians and were attempting to breach Israel’s sovereign borders, a man named Yasser Abd al-Rahman Murtaja was slain. Murtaja was a 30-year-old Palestinian press photographer and cofounder of the Ain Media production company. Yet, as subsequent evidence gathered by the Meir Amit Intelligence and Information Center (ICIT) revealed, Murtaja was also a Hamas operative.

After his death, Hamas officials even made condolence calls to his family, ICIT noted.

Yet, this didn’t stop the Post from publishing articles with headlines like “He was wearing a vest marked ‘PRESS.’ He was shot dead covering a protest in Gaza (April 7, 2018).” Some reporters, such as AP’s Fares Akram, described Murtaja as a “friend” and a “colleague” in an April 6, 2018 tweet.

Many outlets did not wait to ascertain additional facts about Murtaja’s life or his death, although Palestinian terrorists have, at times, posed as journalists in order to attack Israelis (see, for example “Palestinian posing as journalist stabs IDF soldier in Hebron,” The Times of Israel, Oct. 16, 2015). In one October 2015 incident, a terrorist wearing a vest emblazoned “journalist” stabbed an IDF soldier in Hebron. The attack was even filmed. It was also condemned by the Foreign Press Association, which called it a “worrying development” and called on all “Palestinian media organizations to immediately verify all media credentials.”

“We utterly deplore this violation of press privilege and call on local Palestinian media organizations to immediately verify all media credentials to ensure there are no violations,” the FPA said at the time.

“This attack was carried out by someone posing as a local Palestinian journalist. All the same, it marks a worrying development that demands that all media operate with heightened caution in the West Bank and East Jerusalem. This incident is also clearly of grave concern to the Israeli security forces. As the FPA, we try to work closely with the IDF and the Border Police to ensure coordination is clear and that all dangers are minimized. We urge the continuation of that cooperation and coordination to avoid any attack like this happening again in the future,” it said.

A press that jumps to conclusions before all facts are known is not a responsible press. And a press that cannot tell the difference between a terrorist and a journalist is unfit to be treated with anything but contempt. Credibility is earned, not given. And some outlets insist on tossing it away, piece after piece, tweet after tweet.