A review of 22 New York Times news and opinion articles on the abortive second Gaza flotilla between June 2 and July 8, 2011 reveals a pattern of whitewashing the extremist agendas and backgrounds of the participants. Statements and charges made by the flotilla participants were usually reported without editorial comment, while Israeli assertions routinely elicited qualifications or skeptical editorial comment. Notably, the only piece during the review period in which the Times demonstrated a serious attempt to get to the bottom of the story was an exposé of a hoax video produced by an Israeli opposed to the flotilla.

The Times scrutinized the hoax video produced by an Israeli unaffiliated with the government or any major Israeli organization, providing two detailed updates to their investigation. This contrasts with the indifference displayed towards evidence of Hamas’s role in the flotilla. While other news sources revealed the central organizing activities of London-based Hamas operative Mohammed Sawalha and a Dutch newspaper, De Telegraaf, reported that Dutch Hamas leaderAmin Abu Rashed was behind that country’s contingent, the Times gave only the briefest mention of possible Hamas involvement in the flotilla.

Obscuring the Extremist Affilitations of the Participants

Flotilla participants were described as “pro-Palestinian” “pro-Palestinian advocates” or just “activists.” While this represents an improvement over using misapplied labels like “peace activist,” these neutral descriptions are part of a pattern of concealing the extremist affiliations of the organizers and many of the participants.

Novelist Alice Walker, a notable participant, was mentioned in pieces published on June 2, 17, 27, 28 and July 1. The June 2 piece publicizes the flotilla organizers’ attempt to compare their efforts with the Freedom Riders advancing black civil rights in the American South. A blog article on July 1 repeats Walker’s attempt to link the flotilla’s goals with slain Jewish civil rights workers, Andrew Goodman and Michael Schwerner. Yet not one of the five articles discloses Walker’s strident rhetoric. In a June 23 interview with the on-line magazine Foreign Policy, she asserted, “I think Israel is the greatest terrorist in that part of the world. And I think in general, the United States and Israel are great terrorist organizations themselves.” Invited to give a Yom Kippur speech in 2009 at San Francisco Temple Beyt Tikkun, Walker used the occasion to falsely accuse Israeli soldiers of raping Palestinian women and was unable t 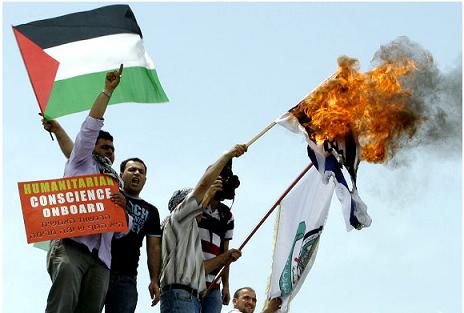 o substantiate her accusation when challenged.
Another participant named in articles on June 2 and June 17 is 86-year-old Hedy Epstein. The articles state that her “parents died in the Holocaust” but did not disclose her longstanding anti-Israel activism.

Correspondent Scott Sayare, on July 6, 2011, twice quotes flotilla “organizer” Adam Shapiro without mentioning that he is a co-founder of the International Solidarity Movement (ISM), an organization that recruits young Westerners to interfere with Israeli anti-terror operations. Considering that several ISM recruits have been killed while interfering with Israeli military operations, it is odd that the Times did not mention this in connection with the stated intentions of the flotilla organizers to confront the Israeli navy.

Many flotilla participants are affiliated with the ISM. After the failure of the flotilla, the ISM organized an attempt by hundreds of activists to fly to Israel and create chaos in Israel and in the West Bank. A full page Times article on July 8 piece did not mention the ISM.
Ignoring the Role of Hamas

The Times failure to scrutinize the involvement of Hamas operatives in the operation is the most glaring omission of all. On June 2, the Times wrote, “American passengers say they support the Palestinian people, not Hamas.”

The role of Muhammad Sawalha in the current flotilla, as well as his role in the 2010 flotilla, have been discussed at great length, but not by the New York Times. Iranian controlled Press TV aired an interview with Sawalha in which he discusses his fund raising and organizing activities.

Dutch journalists were stunned to discover a strong Hamas connection to the flotilla. Hamas operative Amin Abou Rashed showed up and informed correspondents from the Dutch journal Trouw that “he had secured the boat.” Asked if there were any ties with Hamas? He responded “of course. You can’t do without them in Gaza.” The surprised Trouw correspondent wrote, “the passengers had been told that under no circumstance would there be cooperation with Hamas. UNRWA was supposed to distribute the goods in Gaza, not Hamas.” Such revelations were apparently of no interest to the Times.

An Israeli military spokesperson stated on July 1 that Tarik Hamud, brother in law to Hamas political chief Khaled Mishal, was in the flotilla. The Times mentioned this near the end of a report on July 2, quickly followed by a rebuttal, “Flotilla activists denied any links to radical or terrorist organizations and said they had never even heard of Mr. Hamud.” Unlike the Israeli video hoax, the Times did not see the importance of pursuing this story.

Implicitly Supporting Charges of Israeli Sabotage Without Any Evidence

Scott Sayare treated the charge that Israeli commandos sabotaged the propellors of two boats as completely credible despite the fact that it was based on heresay. For example, on the damage to the boat belonging to Irish activists, he wrote on July 2, “activists discovered nearly identical damage to a Greek-Swedish-Norwegian passenger boat this week.” Did Sayare see the damage himself or is he simply accepting the activists’ claim at face value? Sayare’s article imputes credibility to the charge t
hat this was an act of Israeli sabotage and quotes one Irish participant’s assertion that Israel was guilty of ‘international terrorism.” Times Jerusalem Bureau Chief Ethan Bronner similarly treated the sabotage charge as credible.

Sayare quotes Israeli denials, but casts doubt on these denials, claiming to perceive “evasiveness.” The next day, Sayare had to clarify the situation after a Turkish newspaper Hurriyet reported that a Turkish police investigation concluded the boat had not been sabotaged and Israeli spokesman Yigal Palmor stated, ”There is no evidence of any sabotage, and we didn’t do it.”

A 1,588 word Times blog article by Peter Catapano on July 1 added to the false and misleading information. Catapano asserts that the participants’ goal was to “deliver humanitarian aid in defiance of Israel’s naval blockade there” contradicting the Times’ report on June 28 that a letter sent by American participants assured President Barack Obama that they were not bringing “goods of any kind for delivery in Gaza.” Catapano repeats the sabotage accusations, suggesting, “Israel appears to have pressed even its vaunted spy agencies into the service of obstructing the other side. Flotilla organizers say someone sabotaged two of their ships currently docked in Greece.”

Catapano goes on to quote anti-Israel historian Juan Cole that the blockade is “illegal and evil.” That is false: The UN just released a report on the 2010 Gaza flotilla affirming the legality of the Israeli blockade. The Times’ own reporter Dan Bilefsky confirmed this fact on July 7 in a brief report.

Scrutiny on Israeli Opponents of the Flotilla

In contrast to the manner in which the Times obscures the extremist affiliations of the flotilla participants, the credentials of Israeli opponents of the flotilla are treated with skepticism.

Shurat HaDin, an Israeli legal group that effectively gummed up the flotilla plans by challenging insurance coverage of the boats, was introduced by Sayare on June 29 as a group that “describes itself as a civil rights organization.” How many of the numerous non-governmental organizations that work on behalf of the Palestinians are introduced with a qualifier suggesting skepticism about their claim to be doing humanitarian or civil rights work? The answer appears to be none. The pro-Palestinian Israeli group B’Tselem was described in April 4, 2011 article as “B’Tselem, an Israeli human rights group” and on July 2, 2010 “the human rights group B’tselem” and on June 15, 2010, “the human rights organization B’Tselem”  and so on. Similarly for Gisha, another pro-Palestinian group described simply as an “Israeli human rights group” on May 28, June 2 and on July 1, 2011.

In its coverage of the Israeli hoax video, the Times digs into the backgrounds and affiliations of individuals involved, some inadvertently, in disseminating or publicizing the hoax video. Such was the Times interest, that two updates providing further details were published.

What is evident throughout the Times coverage of the flotilla is that the newspaper has a soft spot for the pro-Palestinian activists and filters its reports to exclude information about their extremist affiliations and ties to Hamas. If one were to rely solely on the Times coverage, one would not even realize the extent of Hamas involvement in the operation or the harsh rhetoric voiced by prominent participants.