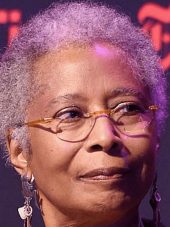 It is not news that Alice Walker – who won the Pulitzer Prize for her novel, The Color Purple – is a longstanding anti-Israel activist, aligned with the most radical groups. Nor is it news that she frequently crosses the line, herself, into outright anti-Semitism, as CAMERA has previously documented.

For example, one of her favored analogies is to equate Israel with Nazi Germany and to label Israelis “Nazis” as she denies Jews the right to self-determination in a Jewish state. This is a clear expression of anti-Semitism, according to the widely adopted IHRA working definition of anti-Semitism.

In a recent poem posted on Walker’s website  entitled “Conscious Earthlings,” Walker attempts to defend herself from charges of anti-Jewish racism by distinguishing between supposedly good Jews whom she befriends and the ones she considers bad Jews whom she labels “Zionist Nazis”:

Zionist Nazis are not the Jews I know; terrorists who would and do; Kill anyone and anything; To get what they want: Control over everyone. I will never be divided from my friends; No matter how bad Zionist Nazis are making Jews look.

But the suggestion that “Jews”as a whole reflect alleged misdeeds of “Zionists” provides just more evidence of exactly what Walker ineffectually attempts to distance herself from. The IHRA definition considers this yet another manifestation of anti-Semitism.

Moreover, the Tablet’s Yair Rosenberg points to a poem Walker posted last year, entitled “It’s Our (Frightful) Duty to Study the Talmud,” which advises readers to look to the ancient Jewish religious text in order to find the root and source of evil. Just as she routinely reveals her woeful ignorance of the Arab-Israeli conflict by misrepresenting or directly lying about Israeli actions, Walker misrepresents the contents of the Talmud, educated, as she is, by fellow anti-Semites on the internet. As Rosenberg correctly notes:

“Anti-Semitic slanders of the Talmud’s contents are almost as old as the Talmud itself, and are one reason why Albert Einstein advocated that it be translated into English, “in order to cut the ground from under certain malevolent attacks, of anti-Semitic origin, which borrow countenance from the obscurity and inaccessibility of certain passages in the Talmud.” Clearly, Einstein did not anticipate the likes of YouTube-educated Talmud scholars like Alice Walker.”

All this is to indicate that there is ample evidence of Walker’s clearly articulated anti-Semitism, her attempts to defend herself notwithstanding. Further manifestation of this is her advocacy of the flagrant, anti-Jewish racist David Icke. In the aforementioned Tablet article, Rosenberg documents the extent of Icke’s unhinged racism and conspiracy theories that draw liberally from the notorious forgery, Protocols of the Elders of Ziyon, as well as the determined promotion of Icke’s lectures and writings by Alice Walker.

Why then would the New York Times, still viewed as a mainstream media outlet despite its oft-criticized advocacy journalism, turn to a notorious anti-Semite who has openly promoted the writings of a racist conspiracy theorist for recommendations on books to read?

Yet it is precisely Alice Walker to whom the New York Times  turned for  book recommendations in its December 13th “By the Book” feature, part of the weekend Book Review section. And it dutifully relayed  her recommendation of Icke’s racist, anti-Semitic book, “And the Truth Shall Set You Free,”  without any qualification or disclaimer regarding the book’s deranged and odious charges.  On the contrary. It included only Walker’s accolade:

“In Icke’s books there is the whole of existence, on this planet and several others, to think about. A curious person’s dream come true.”

Conspiracy theories of the type that Icke espouses and Walker promotes are a staple of anti-Semitic, Nazi and ZOG (“Zionist Occupied Government”) propaganda, and have through the years incited hatred, pogroms and massacres against Jews. Hitler referred to the Protocols of the Elders of Ziyon in his early speeches and in his autobiography, Mein Kampf. It became an integral part of his anti-Jewish ideology and Nazi propaganda. Icke’s book is its progeny, the sort that is embraced by Holocaust deniers, Hamas, and enemies of Jews and the Jewish state.

Needless to say, the New York Times feature created quite a furor, as appalled readers challenged NY Times Book Review editor Pamela Paul about the column on twitter. But the Times editor dug in, defending the newspaper’s choice to feature the recommendation of a anti-Jewish conspiracy theory book by a known anti-Semite, without further qualification. Paul sanctimoniously tweeted:

“We don’t offer background on any of the books in this column. Many people recommend books editors here dislike, disdain or even abhor. By the Book is an interview and a portrait of a person, not merely a list of recommendations, & does not imply an endorsement by editors.”

“So,” asked a reader in response, “if someone recommends [Hitler’s] Mein Kampf, you would just print it without any qualifier?”

The editor responded, “Absolutely. If a public figure wanted to answer the question that way, we trust our readers to make their own judgments.”

This is the familiar defense of New York Times editors who routinely claim that it doesn’t matter what type of misinformation/hate rhetoric/false charges/errors they publish because readers will “make their own judgements.”

When editors have so lost their moral and professional compass or are too timid to rule out advocacy of racism and hate rhetoric, whether directly or indirectly, then they should no longer be employed in such a role. Readers should not give New York Times editors a pass for abdicating their responsibility. And no one should give the New York Times  a pass for its abandonment of journalistic integrity.