Around 3 million Palestinians live in the territory along with some 450,000 settlers, who can generally drive in the area without major restriction using so-called “bypass roads” built to avoid Palestinian towns. 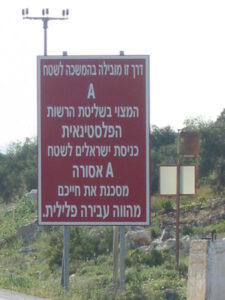 The notion that Israeli settlers “generally drive in the area without major restriction” is belied by the fact that West Bank roads are heavily restricted to Israeli drivers. In fact, Israeli drivers are prohibited from entering at all in Area A of the West Bank, which constitutes more than 10 percent of the territory. In other words, Israeli drivers are kept off entire roads in the areas under full Palestinian control.

As a result, Israeli drivers must take a much more circuitous, time-consuming routes to avoid  forbidden Palestinian locales. So while there are surely bypass roads, their existence is not tantamount to driving “without major restriction.” Bypass roads exist precisely because of the major restrictions.

Palestinian drivers are restricted from limited stretches of specific roads in the West Bank totaling 40.22 kilometers, according to B’Tselem. They too have bypass roads as alternatives to the stretches of roads where they are not permitted to travel.