While Palestinian sources commonly make this claim, that judgement is, at best, disputed, if not outright wrong.
As Israel’s Ministry of Foreign Affairs stated: “The issuance of administrative detention orders against detainees who pose a danger to public security in the West Bank is recognized by international law and is in full conformity with Article 78 of the Fourth Geneva Convention 1949.”
Moreover, international jurists recognize the legality of administrative detention for a variety of cases, among them illegal immigration and national security matters.
In response to communication from CAMERA, Times of Israel quickly amended the article to more accurately report: “Administrative detention is considered to be an extreme tool under international law.”

defense has appealed to Israel’s High Court on several occasions seeking judicial intervention. But the High Court has declined, emphasizing that the evidence of al-Akhras’s involvement in Islamic Jihad revealed to judges behind closed doors is substantive enough to warrant his continued arrest. (Emphasis added.) 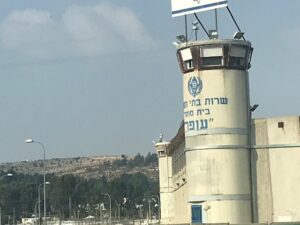 Israel’s High Court of Justice ruled Sunday to suspend the administrative detention of Palestinian prisoner Maher Akhras, who is on a three-month hunger strike.
Akhras, 49, who hails from the village of Silat ad-Dhahr near Nablus, will remain in Kaplan Hospital in Rehovot. The justice ruled that if Akhras is released from the hospital, the remainder of his detention will be reconsidered, and the prosecution will need to make this announcement at least 48 hours in advance.

Times of Israel has likewise revised its reporting on this point in response to communication from CAMERA. The amended article now more precisely states:

His defense has appealed to Israel’s High Court on several occasions seeking al-Akhras’ immediate release. But the High Court has declined, emphasizing that the evidence of al-Akhras’s involvement in Islamic Jihad revealed to judges behind closed doors is substantive.

Contrary to the common journalistic practice reflecting full transparency, Times of Israel did not append a note to the articles alerting readers to the changes.
Donate Now