Times of Israel commendably corrected today after inaccurately reporting that the Congregration Beth Israel hostages were “freed.” Today’s article, “Brother of Texas synagogue hostage-taker says ‘religious nuts got hold of him,” had reported: “His four hostages, including a rabbi, were all freed unharmed.”

While one of the hostages was in fact “freed,” the other three escaped.
The Guardian recently corrected after mistakenly reporting that the Coleyville, Texas rabbi was “released.”
In response to communication from CAMERA’s Israel office, editors promptly amended the article, which now accurately reports: “His four hostages all emerged unharmed; one was freed and the other three, including the rabbi, escaped.”

Separately, in an apparent typo, this Jan. 17 article erroneously referred to the “suspects” as opposed to the hostages, stating: “Asked to clarify whether the suspects escaped or were freed by the gunman, as indicated by other officials and the attacker’s family . . . ” (Emphasis added.) 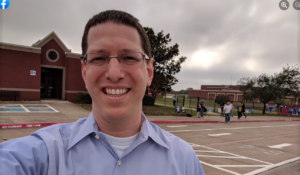 Editors also promptly fixed this error, and the corrected article now refers to hostages in places of suspects.