The February 13, 2004 edition of USA Today published as an advertisement a large editorial cartoon on page 7-A. The illustration features a smug Ariel Sharon at a restaurant table, the U.S. flag in his pocket. The Israeli prime minister is grinding unidentified stick figures under his boot, which carries a “Made in USA” mark. A waiter, identified as “US Press,” serves Sharon a character labeled “US Public,” with an apple stuffed in his mouth. The cartoon’s cutline reads: “Motto of the U.S. Media: ‘To serve the American People’.” 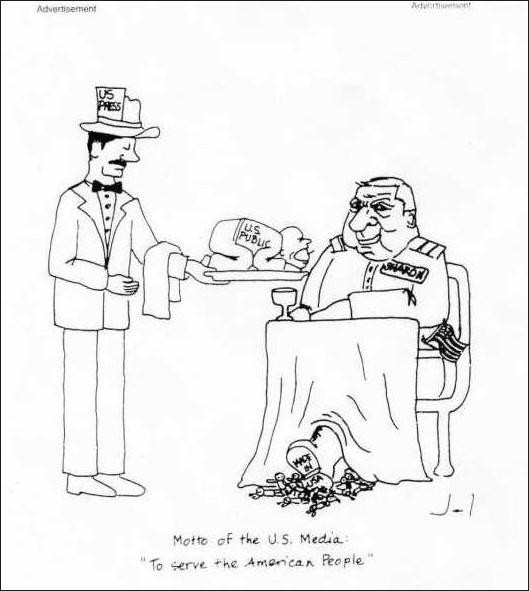 Except for the word “Advertisement,” printed in small type in the upper corners of the drawing, no identifying information appears, save for what might be the cartoonist’s initials in the lower right. A one-sixth of a page ad, such as this, costs $32,400 at USA Today‘s open rate, although that may be discounted.

The cartoon no sooner appeared than USA Today‘s phones began ringing with angry callers. CAMERA received numerous calls and e-mails, and contacted the newspaper’s advertising department. We pointed out that the cartoon mirrored anti-Israeli, anti-American illustrations common in the Middle Eastern press and even neo-Nazi publications. We faxed a copy of such a cartoon — from Al-Watan (Qatar), Aug. 10, 2003 — to USA Today. The Al-Watan drawing features President Bush stuffing a paper labeled “American future” into one pocket of a coat worn by a laughing, hook-nosed, black-hatted figure with side-curls, identified by a Star of David. His other pocket is filled with bags of money labeled “American economy.” 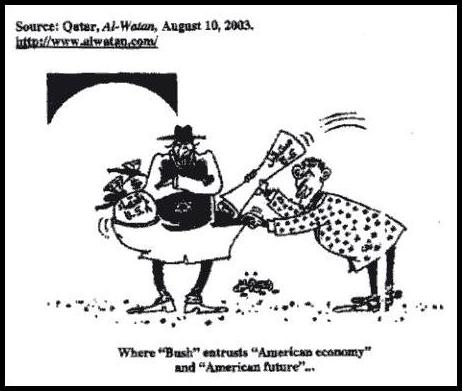 CAMERA pointed out that without information as to who placed the February 13 cartoon, it could be considered a “stealth attack ad.” We asked USA Today about its standards for accepting advertisements and how the Sharon cartoon came to appear.

The paper’s guidelines call for ads to be screened to make sure they do not contain “illegal information, libelous information and are not graphically explicit.” Contact information is to be included regarding the person or organization placing the ad.Ad executives said they had never received a cartoon as an advertisement before, and did not recognize the cartoon’s themes, which CAMERA pointed out may exceed fair political comment to recall stereotypes of alleged Jewish-Zionist control of the American news media and the United States itself.

The executives said future ads using editorial cartoons will be more closely scrutinized and vetted within a larger group of people. From the many callers and CAMERA, USA Today acknowledged it learned what it did not know regarding the images and arguments insinuated by this particular ad. It also provided contact information for the individual who placed the ad:

If you notice hateful ads/cartoons in other newspapers, remind the advertising executive/editor that using editorial judgment to maintain a level of well-informed civil discourse is not in conflict with the freedom of speech. For example, if the KKK submitted a cartoon ad that wasn't directly libelous, but was hateful, a newspaper is under no obligation to publish it.