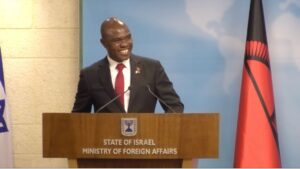 In fact, there was a period in Israel’s short history when [Guatemala] was one of at least 16 states that had their ambassadors stationed in the city.
Three of them were African nations — Ivory Coast, Zaire (now the Democratic Republic of the Congo) and Kenya. . . .
So how did Jerusalem go from hosting 16 embassies to zero? The first blow occurred after the Yom Kippur War, when Ivory Coast, Zaire and Kenya all severed relations with Israel following a meeting of the Non-Aligned Movement in Algiers in September 1973.

But, according to an Israeli National Yearbook for the Jewish year of 5729 (which started in September 1968) there had been 10, not three, African nations with embassies in Jerusalem at the time (pages 145-151). They included the Ivory Coast, whose ambassador also represented Niger, Benin (formerly Dahomey) and Burkina Faso (formerly Upper Volta), the Democratic Republic of the Congo (then Zaire), Congo-Brazzaville, Madagascar (Malagasy republic), Liberia, Gabon and the Central African Republic.

Ivory Coast re-introduced its embassy to Jerusalem for a brief period of several months in 1986.

Reuters was particularly forthright in correcting its report which had erred: “Malawi said on Tuesday it will open a full embassy to Israel in Jerusalem, becoming the first African nation to do so in the contested city” (“Malawi says it will open Israel embassy in Jerusalem“).

In response to communication from CAMERA, editors amended the text to accurately refer to Malawi “becoming the first African nation in decades.” Moreover, Reuters commendably appended the following correction to the bottom of the article, adhering to the highest level of journalistic accountability and transparency: “The story corrects to say that Malawi would be the first African country to open an embassy to Israel in Jerusalem in decades, not the first ever.”

Deutsche Presse-Agentur (DPA), the German wire service, had published an English-language headline Nov. 3 which erred: “Malawi to open embassy in Jerusalem, in first for African country.” The accompanying DPA article more precisely reports: “The foreign ministers of Israel and Malawi announced on Tuesday that the African country will open an embassy in Jerusalem, which would make it the only state from the continent to have an ambassador based there.”

In response to CAMERA’s communication, DPA republished the story the following day under the accurate headline “Malawi to become only African country with embassy in Jerusalem.” 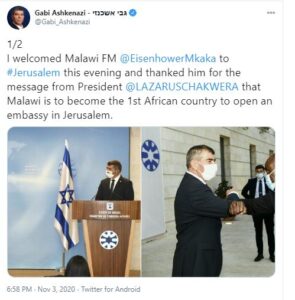 Several journalists informed CAMERA that their source for the misinformation was Israeli Foreign Minister Gabi Ashkenazi, who had referred to Malawi as the first African nation to open its embassy in Jerusalem. CAMERA subsequently spoke with a Foreign Ministy spokesman who stood by Ashkenazi’s statement, but with the key qualification that the foreign minister was referring to the “current round,”meaning in the current context since the U.S. embassy opening. The Foreign Ministry therefore acknowledged that previously other African countries had embassies in Jerusalem.

In a separate error, the article incorrectly states that Sudan moved its embassy to Jerusalem, erring:

The United States moved its embassy from Tel Aviv in 2018, following up on a campaign promise made by President Donald Trump. Sudan followed last month amid normalizing relations with Israel.

While Sudan did announce normalization with Israel last month, it did not open an embassy in Jerusalem or elsewhere in the Jewish state. There is no Sudanese embassy in Israel. In addition, the joint Sudanese-American-Israel announcement last month makes no mention of the exchange of embassies. The Washington Post, among others, reported:

The deal does not immediately entail full diplomatic relations, for instance with an exchange of embassies, but it is an agreement to start discussions over normalization with an initial focus on economic and related matters.

Voice of America today likewise corrected its article and appended the following note to the bottom of the article:

The story has been updated to note that Malawi would be the first African country to open an embassy to Israel in Jerusalem in decades, not the first ever.