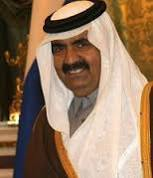 The Qatar-based satellite TV channel’s ‘Nakba’ film, a skillful production, which originally ran in 2008 on al-Jazeera Arabic, recycles in English a one-sided view of events surrounding Israel’s struggle for independence. Elements from the multi-part broadcast in May-June 2013 are available online.
Al-Jazeera
Al-Jazeera, financed by the oil-rich Arab state of Qatar (pictured above is chief of state Sheikh Hamad Bin Khalifa Al Thani), broadcasts to a large Arabic-speaking audience and also to a much smaller English-speaking audience in the United States. But this is likely to change. Al-Jazeera English channel’s limited availability in the United States – notably via Time Warner Cable in New York City area and exposure via twice-daily (at least) half-hour newscasts on a DirecTV fringe politics channel – will increase dramatically later this summer with the takeover of the Current TV network (purchased for $500 million from former Vice-President Al Gore and other investors), now carried by nearly all cable and satellite providers.

In the film, al-Jazeera unsurprisingly propagates the nakba (Arabic for “catastrophe”) myth, which falsely claims that Palestinian Arabs in 1948 suffered a forced exodus at the hands of Israeli Jews comparable to the Holocaust suffered by European Jews at the hands of the Nazis and their sympathizers. Nakba Day on May 15 is marked by Arab protests (including in recent years confrontations along Israel’s frontiers) while Israel’s birthday is celebrated on May 14, the modern Jewish state of Israel having declared its independence on May 14, 1948, in keeping with the U.N.’s 1947 partition plan.

A basic weakness of al-Jazeera’s ‘Nakba’ is that it is a gross exaggeration. According to authoritative sources, in the wake of Israel’s War of Independence in 1948, the overwhelming majority of Arab refugees from what became the Jewish state were not expelled by Israelis. But, ironically, a much larger number of refugees, Jews who had resided in Arab countries for many generations, were forced to flee their native lands. Thus the Jewish “nakba” dwarfed the Arab “Nakba.”

Moreover, the “Nakba” false narrative, including the claim that the Palestinian Arabs are a distinct ethnic and national group, which has spawned numerous conferences and publications, has distorted the historical record. Not surprisingly, Iran’s Press TV, an English-language anti-American and anti-Israeli propaganda arm of the country’s Islamic fundamentalist government, has nothing but high praise for this film.
The film consists mainly of a mix of narration with a steady stream of short, mostly black/white, video clip human-interest interviews of Arabic speakers. English translations are superimposed on the clips. The interviews contain much hyperbole and emotion meant to convey suffering of ordinary Arabs while the narration contains falsehoods and distortions.
Excerpts
Rawan Damen (the film’s producer/director): “For Palestinians, 1948 marks the ‘Nakba’ or the ‘catastrophe’, when hundreds of thousands were forced out of their homes. For Israelis, that year marks the creation of the state of Israel.”

Narrator: “From early 1948, Jewish paramilitary forces began to seize more land in Palestine. By the end of July, more than 400,000 Palestinians had been forced to flee their homes. Their plight as refugees had just started.”

Arab refugees: “We tasted starvation like nobody before… Politics is all empty talk… They say they will do this and that… But it is all hollow rhetoric… We are lost and we lost Palestine.”

Narrator: “In May 1948, the state of Israel was established – a homeland for the Jews – but some 150,000 Palestinians – Muslims and Christians – still remained within Israel’s borders.” [Not surprisingly, two key facts are omitted here: These “Palestinians” were granted full citizenship (long before this film was made) as Israeli Arabs. And before the new Jewish state chose to call itself Israel, the term “Palestinian” for residents of British Mandatory Palestine typically referred to Jews; Arabs tended to shun the description as “Zionist” or “colonialist”].

These excerpts (from episode 4) typify the film’s repetitious propagandistic message debunked by eminent scholars (such as Efraim Karsh, Fabricating Israeli History: The New Historians; Shabtai Teveth, The Palestine Arab Refugee Problem and its Origins, Middle Eastern Studies, April 1990). They have debunked the claims of mass expulsions of Palestinian Arabs during the 1948-49 Arab war of aggression against Israel (at least five Arab countries invaded).

The historical record shows that in most cases, the hundreds of villages often claimed by Arabs and others as “destroyed” either were abandoned in 1947 and 1948 by Arabs who fled – often at the instigation of Arab leaders (who vowed that the refugees would be returned to their homes as soon as the Arab armies eliminated the Israeli Jews), often to escape the fighting caused by attacks against Jewish villages and towns by Arab “irregulars” and the invading Arab armies, or destroyed in fighting during the war. In many cases, Israelis purchased land from Arabs and set up Jewish villages where there had once been Arab villages. Not surprisingly, mention is not made that the invading Arab armies overran Israeli villages, expelling or killing the Jewish inhabitants. Thus, Israelis were fighting for their survival. A few Arab notables have acknowledged the Arab leadership’s major responsibility for the mass exodus.

Reality Versus Myth
But the film never comes close to grasp
ing the essential reality of the situation. Had the Palestinian Arabs and the Arab countries accepted the U.N. partition [resolution], had they not waged a war of aggression against Israel in violation of the U.N. Charter, and had they not invaded Israel, there would not have been a single Palestinian Arab refugee. Instead, there would have been a [second] Palestinian Arab state (side-by-side with Israel, in addition to Jordan, which occupies 77 percent of the original Palestine Mandate territory and includes a majority Palestinian Arab population) that would also be celebrating its anniversary in May. In addition, the 6000 Israelis who were killed in the war – one percent of the population – would instead have lived; likewise the Arabs fallen in a war imposed by Arab leadership. But because the Arabs were more interested in destroying Jewish Israel than creating another Arab state, millions of people – both Arabs and Jews, suffered unnecessarily.
Few Instances of Media Scrutiny of Al-Jazeera

• “More influential than al-Libi or al-Awlaki has been Sheik Yusuf al-Qawadari, whose al-Jazeera [Arabic] TV programs reach tens of millions. Al-Qawadari was a ‘spiritual guide’ to the Brotherhood, the anti-Western, anti-Christian, anti-Jewish movement ascendant in Egypt and strengthening elsewhere. He hopes for the conversion of Europe to Islam and a Muslim-led genocide of the Jews.” (Wash. Jewish Week, Sept. 27, 2012).

• “Al-Jazeera demonstrated its commitment … in July 2008, when it held a birthday celebration for Samir Kuntar, a released Lebanese terrorist who killed a 28-year-old Israeli father in front of his 4-year-old daughter and then crushed the daughter’s skull with his rifle butt.” (Front Page Magazine). The Jerusalem Post  describes Israeli reaction to the Kuntar birthday party: “The Government Press Office has decided to impose sanctions on Al-Jazeera after the station’s Beirut office threw a party for released Lebanese terrorist Samir Kuntar. Daniel Seaman, director of GPO, announced the sanctions during a meeting with Al-Jazeera’s bureau chief in Israel, Walid al-Omari, who claimed that this was a ‘mishap’ that is being checked by his station.”
• Former al-Jazeera English anchor Dave Marash gave his reason for resigning: “… the channel had changed radically from when I was hired… By the time I left … [functions of the Washington bureau] had been taken over in Doha, the capital of Qatar… I, as the leading anchor in Washington, felt that I could not put my name on those kind of stories [reflecting Doha’s ‘attitude’ i.e. the need to be aligned with Qatar’s foreign policy objectives].”
There is little doubt that this “Nakba” production is a preview of the type of slick propaganda that can be expected from al-Jazeera when it replaces the programming on Current TV network later this year. At that time, the number of potential viewers will be greatly multiplied since Current TV, unlike al-Jazeera English, is carried by major providers such as Comcast, Verizon, and DirecTV. It’s doubtful from a business model viewpoint that providers will chose to cancel Current since al-Jazeera network, in all likelihood, will provide the channel either free or at minimal cost to the providers. The Arab network states that “Al Jazeera English is available free-to-air through satellite and cable providers around the world.”