Christiane Amanpour, CNN’s chief international correspondent and host of the network’s flagship global affairs program, Amanpour, turned to a fringe political group that holds Israel entirely responsible for the continuing conflict in the West Bank for a segment of her half-hour Nov. 24, 2016 broadcast. Amanpour introduced a superficial report: “In a new documentary called ‘Disturbing the Peace,’ we meet Combatants for Peace, a group of Israelis and Palestinians who’ve renounced violence to work for peace together.” 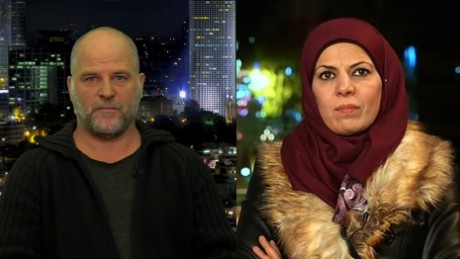 Amanpour, broadcasting from London, interviewed a pair from the “peace” group – Ms. Shifa al-Qudsi, in Nablus (West Bank), a Palestinian Muslim would-be suicide bomber who was intercepted by Israeli authorities the night before her planned bombing, and Chen Alon, in Tel Aviv, former Israeli military officer “turned peace campaigner.”
Combatants for Peace consists of former Israeli soldiers and former Palestinian combatants (ie. terrorists). Alon and al-Qudsi, representing the group, convey the message that Israel is mainly (if not entirely) responsible for the conflict. Alon expresses contrition for Israel’s role, but shows no concern for fellow Israelis victimized by Palestinian violence. Meanwhile, al-Qudsi adheres to the Palestinian victimization narrative heaping all the blame on Israel.
Alon describes his moment of alleged enlightenment:

One day at a checkpoint, I see a taxi filled with children and the driver is explaining to us that these are sick children. He asked us to let them go to hospital. And I said no, these are the orders. You don’t have permit. You have to arrange that and then he’s like – he was about to kill me, and at that moment I got a phone call from my wife.

For Chen, that phone call was the turning point that turned him away from serving in the occupied territories [Alon spent time in jail after refusing to serve in the West Bank].

For Shifa, the turning point came in an Israeli jail, where she met a guard whose child had been killed in a suicide attack. Shifa, I know that you went through a lot of death. You saw a lot of relatives killed. What was the one moment that turned you from a peaceful civilian into somebody who wanted to be a suicide bomber?”

Al-Qudsi replies through a translator:

The injustice that I’ve seen in my country, the killing of children and women and elder people –the destruction of [the] Palestinian people entirely. That made me to think about the turning point in my life.

… I realized that I’m violating basic human rights, that I’m struggling to provide for my children, and that was a crack that I couldn’t live with anymore.

Shifa, you were discovered before you were able to blow yourself up. You wanted to do it in the Israeli town of Netanya. And you went to jail. What kind of a conversion or realization did you have? How did that turn you?

It turned me from martyrdom operation to a non-violent movement because we’re trying to resist the political operations of the Israelis. We were trying to do something for both people. Whether they were Israelis or Palestinians, they are humans in the end.

This film ‘Disturbing the Peace’ really shows how you’re trying to work together to actually achieve something that the political leaders haven’t been able to achieve and peace and a two-state solution still is not on the table.

A complete CNN transcript of the 6.2 minute segment is available at the Web page.
Realities

Amanpour’s production suggests that Israeli control in the West Bank (ancient Israel’s heartland of Judea and Samaria) is typified by violence and subjugation. She promotes a narrative that Israel’s victimization of the Palestinians precipitates the hopelessness that leads to understandable violence. Al-Qudsi charges that Israeli soldiers’ “killing of children and women and elder people” has led to “the destruction of [the] Palestinian people entirely.” But this is not factual. First, the checkpoints and Israeli military intrusions are a response to Palestinian violence, they are not the cause. The recurring violence is incited by longstanding and relentless anti-Israel and anti-Jewish invective from the Palestinian media, mosques and schools. Such incitement to violence violates Article 26 (2) of the U.N. Universal Declaration of Human Rights, as well as Israeli-Palestinian agreements.

< p class="nopadding" >In contrast, no such incitement to violence or hatred against Arabs exists in mainstream Jewish society that is analogous to that found in Palestinian society. For example, the Palestinian Arabs (and their anti-Israel supporters) demand a Jew-free West Bank. Israel’s mainstream makes no such demand to remove Arab residents within Israel.

The recent Palestinian violence – a year-long spate of stabbings, shootings and car rammings has been fueled by daily Palestinian incitement against Jews by Palestinian Authority (PA) officials who honor terrorists and praise their acts of violence. The most recent wave of terror began around the time that an incendiary declaration was broadcast to Palestinians by PA controlled media.

Among the sources reporting on this matter was the Wall Street Journal on Oct. 18, 2015: “Mr. Abbas, the PA president, said the following on Palestinian television on Sept. 16: ‘We welcome every drop of blood spilled in Jerusalem. This is pure blood, clean blood, blood on its way to Allah. With the help of Allah, every martyr will be in heaven, and every wounded will get his reward.'”

Abbas has insisted that the recent Palestinian terror attacks against Israelis is a natural consequence of despair but the evidence shows that Palestinian incitement plays a major part in the phenomenon. The upshot of this is the attitude of Palestinians as a society towards their Jewish neighbors.

For example, a December 2015 poll conducted by the Palestinian Center for Policy and Survey Research (PCPSR) showed that a majority of Palestinians favor violence against Israelis.

Meanwhile Israel’s Prime Minister Netanyahu awaits a meaningful response regarding negotiations from the Palestinian side while his Palestinian counterpart Abbas has repeatedly and explicitly rejected the idea of two states for two peoples. Palestinian leaders rejected U.S. and Israeli offers of two-state solutions in 2000, 2001, 2008 and spurned renewed talks on such an agreement proposed by Secretary of State John Kerry in 2014.

The PA insists on various conditions unlikely to be accepted by any Israeli government before peace negotiations can take place, including: Israel must accede to the demands that it abide Palestinian refusal to recognize Israel as a Jewish state (evidently 22 Arab Muslim states is fine but one Jewish state is one too many) and a “right of return” (that does not exist in international law) for millions of Arabs (nearly all of whom have never lived in Israel) which would inevitably result in the transformation of the land of Israel into a 23rd Arab Muslim state of Palestine.

Israel currently views the West Bank as consisting of three areas. The PA has complete control in Areas A and B, where the vast majority of Palestinians live. The PA sets its own civil laws in areas A and B, and Israel does not have any control at all over that realm. Israel does have authority over civilian law in Area C, where a small minority (less than seven percent) of Palestinians live.

Amanpour’s segment fails to inform viewers of crucial historical context. Israeli troops had withdrawn from the majority of Palestinian population centers in the West Bank after Israel and the PA signed an interim agreement on Sept. 28, 1995. But with the resumption of Palestinian violence against Israelis during the second intifada (2000 to 2005), Israeli troops re-established a major presence in the West Bank.

In any case, the current situation is that the PA has jurisdiction over the daily lives of almost all West Bank Arabs, while Israel remains the legal, obligatory military occupational authority pending conclusion of a negotiated agreement on the territories’ final status.

Amanpour’s speech speaks volumes
The reporter’s unreliability is evidenced in a speech she delivered to the Committee to Protect Journalists in New York on 22 November 2016. She included this in her opening remarks:

“… I believe in being truthful, not neutral.”

But who defines “the truth”? Should we rely on Christiane Amanpour to tell us what the truth is?

Amanpour asserts that for her, the key goal is to “fight to remain relevant and useful.” To her that is more important than to remain consistent with old-fashioned journalistic ethics to report objectively.

Sampling Amanpour’s airings
• In January 2015, Amanpour described as “activists,” the Islamist terrorists who murdered 12 employees of the satirical newspaper Charlie Hebdo, that published pictures of the Prophet Mohammed.

• Amanpour’s programs often reprove Israel for its alleged myriad faults. She has inaccurately likened Israel to apartheid South Africa. An example of this is in the coverage of a 2014 memorial service for former South African President Nelson Mandela in Johannesburg. She drew what was supposed to be a key lesson from Mandela’s leadership applicable to an intractable conflict of today. Not Syria’s civil war, not Iraq’s civil war nor any number of other bloody internecine conflicts, but to the Palestinian Arab conflict with Israel, in falsely equating the struggle of South African blacks to the travails of the Palestinian Arabs.

• In 2016, Amanpour used the death of Shimon Peres, former Israeli president and prime minister, as an excuse to malign Israel’s policies towards the Palestinians. This was accomplished largely through Amanpour’s hosting of two far left Israeli politicians who opposed the current government’s policies along with two Palestinian politicians who spewed propaganda. Amanpour failed to provide any guest to counter these critics.

• In Amanpour’s 2009 special, Generation Islam, (an investigation of the battle between extremists and moderates for the “hearts and minds” of young Muslims, especially in Afghanistan and Gaza), she included among the bad guys Jews of Israel for allegedly oppressing the Palestinians in Gaza, while ignoring the Islamists who rule Gaza, teach hatred of Christians and Jews, and use Gaza as a base to attack Israeli civilians with suicide bombers and thousands of rockets. She failed to offer a single mention of the hate indoctrination by Hamas.

• CNN’s God’s Warriors, h
osted by Amanpour, was a 2007 three-part series that examined the growing role of religious fundamentalism in today’s world. In the first part, Amanpour falsely equated Jewish (and Christian) religious fervency with Muslim radicals endorsing “martyrdom,” or suicide-killing. The series emphasized the alleged sins of the Jews and slurred Christians.
Challenging CNN
It is a disservice to viewers for the network to provide a lead role in international reporting on Israel to Amanpour, an advocacy journalist, who demonstrates a consistent bias against the Jewish state, and has treaded softly on Islamism. Amanpour’s bias prevents her from presenting the full spectrum of viewpoints and factual context necessary to understanding the situation in the West Bank and Gaza.
CNN remains derelict in failing to provide factual accuracy and necessary oversight. It demonstrates an undeserved deference toward their presumed media star who advocates under the guise of reporting.
Donate Now