If further proof were needed that the BDS (boycott, divestment, and sanctions) campaign against Israel is deeply antisemitic, a venomous “mapping” campaign defaming and targeting Boston-area Jews provides stunning evidence.

A Boston BDS group recently publicized a map listing the addresses of Jewish institutions across Massachusetts and calling on followers to use the addresses to “dismantle” and “disrupt” the institutions. Although the project was slammed as antisemitic and dangerous by members of Congress, the Boston Globe has not covered the scandal.

Also included in the list are Jewish communal organizations ranging from the ZOA to J Street (including the ADL, AJC, CAMERA, JCRC, New England Jewish Labor Committee, New Israel Fund and others), and Newton’s public school district — the elementary schools, middle schools, and high schools in a city known for its high Jewish population (30%). 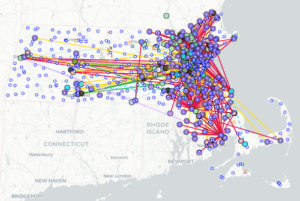 The “Mapping Project” circulated by BDS shows the location of Jewish communal groups along with police departments and some other institutions.

The so-called “Mapping Project” (which also lists, and links the Jewish groups to, local police departments, universities, and some corporations) holds Jewish communal organizations responsible for the world’s ills, both abroad and in the United States.

The map implicates the Jewish community in “white supremacy,” “colonization,” “US imperialism,” and “propaganda.” Boston’s “Zionist leaders” are even charged with “extracting wealth from colonized Puerto Rico” and “advancing the privatization of US public schools.” Opponents of antisemitism are said to be responsible for police violence.

The BDS activists behind the map appear to encourage violence against those on the list—the allegedly evil Jewish students, artists, worshipers, philanthropists, and disabled people. “These entities exist in the physical world and can be disrupted in the physical world,” the Mapping Project asserts and specifies: “We hope people will use our map to help figure out how to push back effectively.”

The map creators call for confronting Zionists with a “network of resistance.” On a page directly and prominently tying “Zionism” to “policing,” they clarify that in confronting the police—and perhaps also their Zionist enablers—they support “resistance in all its forms,” a clear call to violence.

Antisemitism has always festered on the right and left fringes. This Mapping Project, though, has been promoted by influential political activists with inroads to various Massachusetts politicians. 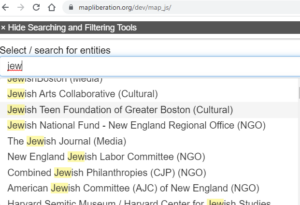 A search for the text “Jew” reveals just some of the Jewish communal organizations targeted by the BDS project.

With their attack on the Massachusetts Jewish community, the authors of the Mapping Project make this as clear as ever.

(As an aside, the authors describe “Zionism” not only as support for the existence of Israel, but also as support for Jews continuing to hold land there, including land purchased before Israel’s independence in 1948. Here, anti-Zionism is antisemitic redlining.)

The authors of the Mapping Project have remained anonymous. Its promoters, though, have been prominent in Massachusetts political activism. A lobbying group called Massachusetts Peace Action, which has been frequently cited in the Boston Globe, has promoted the map. A group called BDS Boston, too, has heavily pushed the map.

The leadership of both of these groups includes young activists highlighted in the New York Times as being prominent boosters of Senator Ed Markey’s recent campaign, part of an informal collection of activists, dubbed the “Markeyverse,” that the Senator thanked by name.

Even after the activists criticized Markey for criticizing Israel but say it had a right to defend itself against Hamas rocket fire, Markey’s chief of staff said, “I can tell you, Senator Markey loves these people.” The Times also tied the collection of activists to campaigners for Elizabeth Warren and Michelle Wu.

Antisemitism is always a danger to Jews. And with political extremism from all sides on the rise, it’s especially imperative that our politicians understand the threat, in all its guises including the BDS movement, and from all its sources including political campaigners. One polling organization, for what it’s worth, found that a disturbing number of young Americans support political violence. Just this week a man was arrested for attempting to murder a Supreme Court justice. (An activist who has heavily promoted the anti-Jewish map, and who is part of the leadership of Mass Peace Action, BDS Boston, and the so-called Markeyverse, appeared to cheer the attempt, though her language was vague enough to leave room for interpretation.)

It is reassuring that, at least when the antisemitism is so flagrant and clear, many prominent politicians have spoken out in support of the Jewish community.

Rep. Katherine Clark stated, “At a time where anti-Semitism and political violence is on the rise, this ‘mapping’ of Jewish people, schools, organizations, and academics is alarming” and could “provoke attacks against the Jewish community.”

Rep. Seth Moulton said the project is a dangerous “anti-Semitic enemies list with a map attached.”

Rep. Ayanna Pressley released a statement saying that “It is not acceptable to target or make vulnerable Jewish institutions or organizations, full stop.” (Some might be confused about the source of this specific threat, since her statement pointed the finger at “antisemitism and organized, violent white supremacy.”)

Attorney General Maura Healy wrote: “With antisemitism rising across the country, including here in Massachusetts, this is irresponsible and unacceptable. Mapping out Jewish community groups, arts organizations, and schools like this puts residents and their families at risk.”

Outside of Massachusetts, Representatives Ritchie Torres, Jerry Nadler, and Brian Schatz forcefully spoke out against the BDS antisemitism.