The Boston Mapping Project, an initiative by anti-Israel BDS (Boycott, Divestment and Sanctions) activists in Massachusetts, targets Jewish organizations in the area and others who accept or uphold the Jewish state. The targeted organizations are falsely accused of being complicit in “the colonization of Palestine and harms that we [the BDS activists] see as linked.” The mapping website alleges malevolent connections to policing, universities and industry and publishes many organizations’ street addresses, explaining its mission as follows:

“Our goal in pursuing this collective mapping was to reveal the local entities and networks that enact devastation, so we can dismantle them.  Every entity has an address’ every network can be disrupted.”

The mapping project appears to be an expansion of an earlier BDS campaign that ties allegations of racist policing in the US with Israeli training and with Jewish American organizations.

That original campaign, called “Deadly Exchange” was launched in 2017 by Jewish Voice for Peace (JVP) to target both Israelis in Israel and Jews living outside Israel who support the Jewish state.  In this way, it seeks to deny Jews and Jewish organizations their freedom of speech and freedom of association – and is typical of BDS campaigning in general.  Singling out exchange programs between American police, the FBI, ICE, and Israeli law enforcement agencies, among all other police exchange programs – for example, those with Mexico and European countries – “Deadly Exchange” attacks Israel alone for allegedly advancing racist policies in the US. According to the campaign, the Jewish state serves as the evil role model for Americans.  It demands exchange programs with Israel be cancelled and calls on people to “hold accountable the Jewish institutions that run and fund the deadly exchange.”  A visual graph that accompanies the campaign shows the mainstream Jewish organizations that are allegedly “complicit” in promoting racism in America — AIPAC, Taglit Birthright, JINSA, the ADL and the AJC. 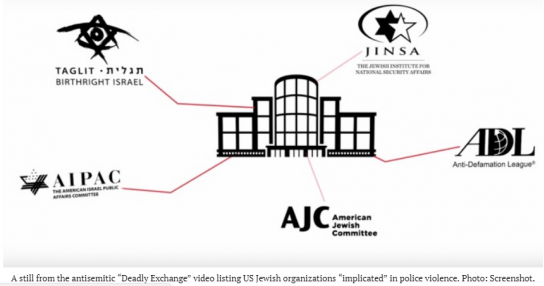 The campaign evoked the standard anti-Semitic trope of Jews spreading their tentacles to encompass the world and corrupt others with their evil.  It’s classic anti-Semitism. 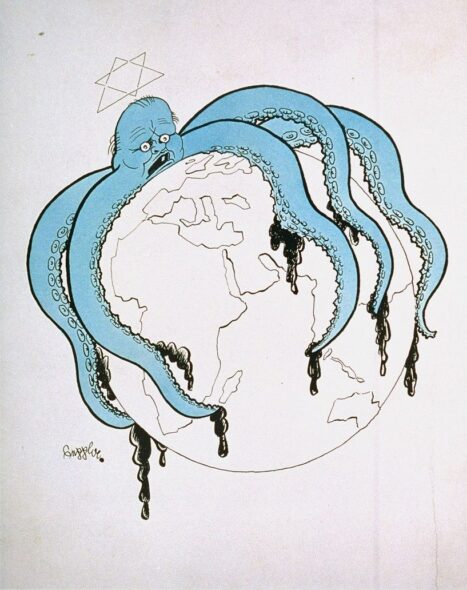 The Boston mapping project’s launching point echoes the “Deadly Exchange” campaign with its first item cited being “policing” — to demonstrate the “institutional support for the colonization of Palestine.” And beyond those allegations, the mapping project connects the Jewish community to “white supremacy,” “colonization,” “US imperialism,” and “vast theft” – the central crimes of Marxist ideology that echo the most radical themes of today’s turbulent politics.  With its stated goal of “visualizing connections,” the mapping project expands the Deadly Exchange graph to include a wider range of Jewish targets — a council of synagogues, schools, a disability group, an artist collaborative, unions, and others associated with being Jewish or with incorporating Jewish belief, history or culture, of which the Land of Israel has always been a central component. It names communal leaders, philanthropies, and board members of some groups. 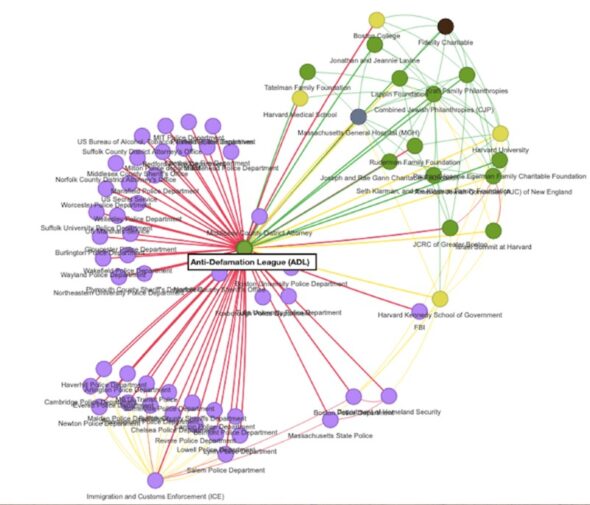 Most chillingly, the BDS activists behind the map appear to encourage violence against those on the list – the allegedly evil Jewish students, artists, worshipers, philanthropists, and disabled people. The map authors state: “These entities exist in the physical world and can be disrupted in the physical world” And “We hope people will use our map to help figure out how to push back effectively.”  They explain that their maps should be used as “a resource for gathering intelligence on the agents of oppression” and they encourage “disruption of the network” through “non-cooperation, community self-defense, and resistance in all its forms” – the latter widely understood to be violent confrontation.  It is no wonder that the Goyim Defense League, a white supremacist group that peddles in virulent anti-Semitism, has lauded the mapping project as “super, duper, ooper important.” 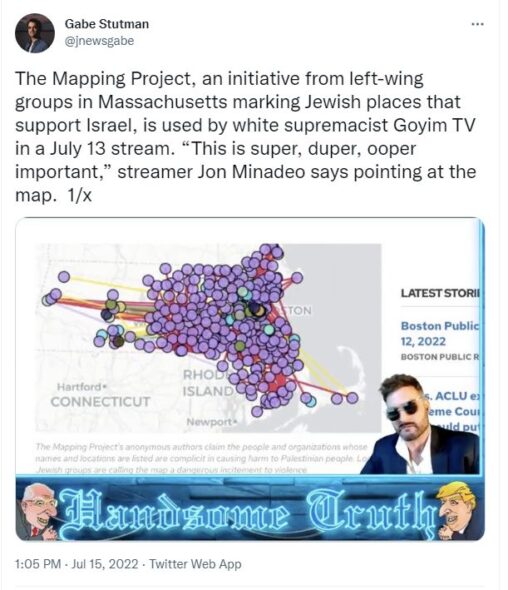 The BDS activists who created the Boston Mapping project have taken pains to hide their identities. They appear to have connections to the BDS Boston group, which brought the project to light and continues to promote it, as well as to an entity called the JISR Collective, whose website is the most vociferous supporter of the project. JISR (“bridge” in Arabic) is a radical group with ideological links to the Popular Front for the Liberation of Palestine (PFLP), a foreign designated terrorist organization. JISR describes itself as “an Anti-Imperialist Arab Diaspora Media Collective.” Its motto on Twitter is “No to normalization. Yes to resistance.” Like the mapping project, JISR hides its activists’ identity by presenting themselves as “a multi-generational collective” and like the mapping project, JISR is driven by ferocious animus towards Israel and Jews whose aim it is to disrupt normalization of Israel in the Middle East and to de-normalize Jewish life in America – which includes normalizing antisemitism.

The Boston mapping project is far from the first example of classic anti-Semitism by BDS activists. (For earlier examples, see “The Intrinsic Bigotry of BDS”). It’s just the latest example that shines the light on the anti-Jewish bigotry of the BDS movement and its adherents. It reveals how BDS is a magnet for Jew haters to express their anti-Jewish sentiments under the cloak of righteous activism. 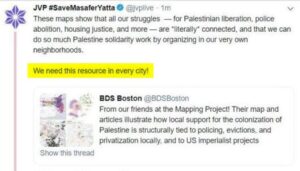 BDS groups – like JVP that immediately endorsed the project, urging that it be expanded to other cities — were likely prepared for the reaction from local Jewish organizations that were targeted, as well as from Jewish individuals calling out the antisemitic nature of the maps.  Their M.O. is to go on the offensive, to accuse their critics of trying to suppress criticism of Israel and deflect attention from Israel’s supposed misdeeds. They use it as an opportunity to repeat falsehoods that further demonize the Jewish state as genocidal and apartheid.

But they probably had not anticipated the fierce outcry from American politicians and representatives, especially those on the progressive side politically with whom BDS activists seek to align themselves.  The governor of Massachusetts, both senators, and a significant portion of the congressional delegation denounced the mapping project. The FBI opened an investigation. US Attorney Rachel Rollins also condemned it and said the Justice Department and FBI are closely monitoring and leaving no stone unturned in preventing harm to the Jewish community. Thirty-seven Members of Congress sent a letter urging the U.S. Department of Justice, U.S. Department of Homeland Security, and the FBI to investigate the use of the map by violent extremist organizations and terrorists, boost security for targets listed in the Project, and work with social media companies and internet service providers to prevent the map’s further distribution. At a local level, the mayor of Newton – a heavily Jewish city whose schools were targeted as well as citizens part of local institutions – denounced the mapping and the Newton City Council issued a powerful statement condemning it.

The strong response of elected and other government officials soon prompted tensions in the BDS movement. After about two weeks of sustained criticism of the project, the BDS National Council sent a letter to the BDS Boston group, telling them to desist from endorsement of the mapping project or cease using the BDS name. It also put out a statement distancing itself from the project. But the BNC statement included just a perfunctory disclaimer before immediately reverting to its M.O. of turning on the Jewish groups that exposed and criticized BDS anti-Semitism.  It opposed the mapping project because it believed it was a tactical mistake that provides “a pretext for repressive attacks on the Palestine solidarity movement by anti-Palestinian racists and apologists for Israeli apartheid, especially AIPAC and the ADL.”

According to leaked excerpts of the BNC letter to the Boston BDS group, the BNC reaffirmed its support for “armed resistance” against the Israeli occupation which it falsely claimed was in accordance with international law but criticized the mapping project for being nonstrategic in its call for “resistance in all forms.”  That, it claimed, opens the door for the “eager Israeli lobby” to intensify its attacks on the movement and its activists. The fear was that the BDS guise as a non-violent, human rights movement would be compromised, and the distancing tactic was a strategic ploy to maintain the pretense that the movement is a positive rather than a negative force. The result was that rifts and fissures within the movement were created or deepened. Some, like JVP and its former executive director Rebecca Vilkomerson (under whose helm the Deadly Exchange campaign was launched and who urged the Boston mapping project be introduced in other cities as well) removed their tweets and posts promoting the project. Others condemned the BNC statement, accusing them of collaborating with Zionists. The BNC was accused of trying to “police the actions of BDS groups” and undermine those openly calling for resistance.

The BNC Arabic website did not include the disclaimer that was posted on the English-language website.  Nor did many of the BNC constituents in the Middle East weigh in on the matter one way or the other, likely seeing the mapping project as a local diaspora issue. So it is noteworthy that the PFLP (whom JISR ideologically aligns with) put out a statement in Arabic, as well as in English, expressing appreciation and support for the project.

Iran’s Press TV also joined the chorus of mapping project supporters.  It urged the Boston BDS group to intensify the targeting of pro-Israel groups. “It is perfectly legitimate to target Jewish groups that support Zionist crimes” a reporter declared and called for the Mapping Project to be “rolled out in all 50 states and internationally.”

The mapping project is thus proving to be a liability for those in the BDS movement who prefer to present themselves to a diaspora audience as anti-racist and non-violent. Not only have progressive politicians recognized the antisemitic nature of the project, but it is shining a light on the antisemitic nature of the movement itself – and the danger it presents to Jews all over the world.