Israel is one of the countries with the highest level of air pollution in the world, according to a report released Wednesday by the World Health Organization (WHO).

The report, which surveyed 1,600 cities in 91 countries, revealed that the world’s air quality is deteriorating.

Israel ranked 12th in levels of PM10, tiny particles of solid or liquid floating in the atmosphere which affect our health.

The country with the worst air pollution in the world is Afghanistan, where the average levels of polluted particles measured was 334, followed by Iran (320), India (200), Bangladesh, Senegal, Mongolia and Mauritius.

The Hebrew version of the article, which was shared thousands of times on Facebook and which received hundreds of talkbacks, was illustrated with the following graphic listing the worst offending countries: 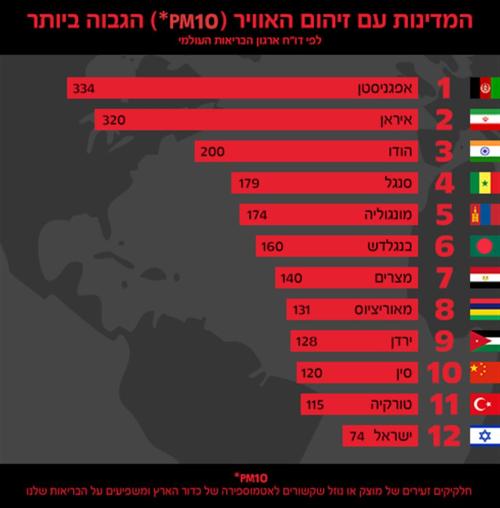 Yet, none of Ynet’s figures accurately reflect WHO’s data. The full data can be downloaded in a spreadsheet here, or seen in an interactive map on the WHO’s website. Several mistakes and exaggerations are immediately apparent.

First, the article fails to mention that no data was available for 107 countries. Thus, the article should have made clear that the rankings only relate to countries that compile data on air pollution, and not the entire world. Moreover, even if the writer intended to count only countries for which data is available, Israel would not be 12th.The following table (which does not include countries for which there is not data) is from the WHO’s Web site: 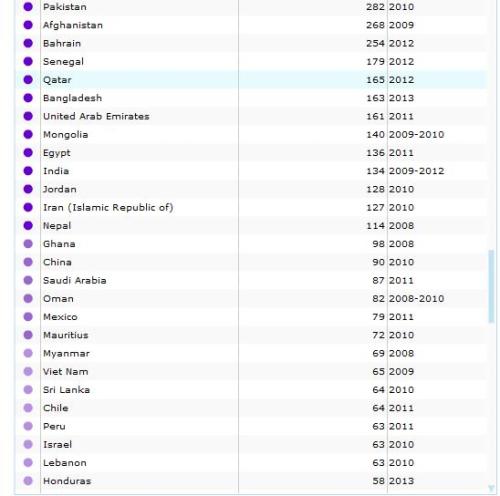 Thus, according to WHO, Israel ranks 24th (together with Peru and Lebanon), not 12th, as claimed by Ynet.

But this isn’t the only mistake. Ynet also erroneously reported the figures for each country. For example, Ynet cited Afghanistan’s pollution figure as 334 PM10, while WHO’s table shows it had only 268 PM10. Pakistan, which, at 282 PM10, is the most polluted, isn’t even cited in the Ynet article.

So how did Ynet get its figures so wrong? The answer lies in Ynet’s inconsistent methodology. Instead of citing the country-wide average, as WHO itself did, Ynet picked the pollution level of a single city in each country. At times, that city was the most populated in that country. In other cases, it wasn’t.

Thus, Ynet put Israel’s pollution figure at 74 PM10, but that is actually the number for Ashkelon, Israel’s most polluted city. Israel’s country-wide average, however, is 63 PM10.

In contrast, for India, Ynet cited 200 PM10, which represents neither the country’s average 134 PM10, nor the country’s most polluted city (which is Gwalior, with an air pollution rating of 329). 200 PM10 is the pollution level for the Indian city of Agra, which happens to be first in WHO’s alphabetical list of Indian cities.

In summary, Ynetnews’s figures were a compilation of errors demonstrating a fast and loose approach to the data.

Shortly after the publication of Ynet’s error-riddled story, the erroneous statistics appeared in numerous other Israeli media outlets. For example, the English-language ” Israel Hayom reported the next day (“Hold your breath: Israel ranks poorly in WHO air pollution study”):

Israel has the 12th worst air quality among the 91 countries included in a World Health Organization report, issued Wednesday.

The study measured the concentration of fine particulate matter for particles smaller than 10 microns and smaller than 2.5 microns, in 1,600 cities around the world. Based on the 10-micron or less measurements, the country with the highest air pollution is Afghanistan, with a concentration of 334 micrograms per cubic meter.

Similar erroneous articles appeared in the Hebrew media websites of Reshet Bet and Nana10 . Representatives of nearly all the various media outlets did not respond to requests to clarify how they reached their figures. Given the lack of any other explanation, the most plausible reason for the repetition of the misinformation is that the various publications all copied their report from the original Ynetnews piece.

The article published in Nana10, suffered from varios errors – for example data referring to cities was presented as representing whole countries.

Despite the claims by the World Health Organization, the editor of the article believes that originally the report was published with somewhat different data, or it was represented differently than its current form.

However, following your inquiry, we have corrected the regrettable mistake, and hope that it will not recur.

For the Hebrew version of this article, please visit Presspectiva.