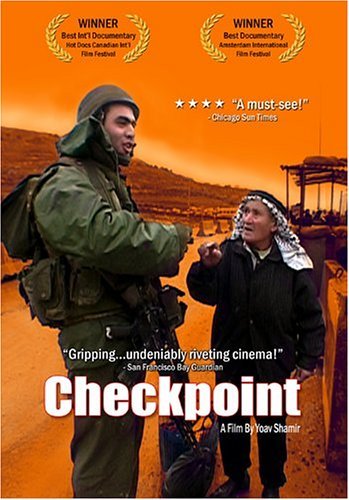 Checkpoint (2003)
Hebrew title: Machsomim
Directed by: Yoav Shamir
Produced by: Amit Breuer
Amythos Films &  Eden Productions, with the assistance of The New Israeli Foundation for Cinema & Television & Noga Communications
Hebrew / Arabic / English;  English subtitles
80 minutes
Checkpoint is one of a group of films funded by The New Foundation for Cinema and TV that document the difficult circumstances under which the Palestinians live and hold Israel alone responsible for those circumstances. These films follow a hackneyed format: The Palestinians are depicted as victims, while Israelis are depicted primarily as soldiers, who are either callous and arrogant, or immature and doubt-ridden. By failing to explain how Israeli measures came about as a  defensive response to Palestinian terrorist attacks, Checkpoint serves to diminish rather than build understanding of the  Arab-Israeli conflict. The film offers a brief historical background but entirely omits mention of Palestinian terrorist attacks against Israelis. The result is predictable: a banal and trite film that does not explore the multi-faceted dimensions of the conflict.

Checkpoint consists of a series of scenes showing the daily interactions between Israeli guards and Palestinians attempting to pass through security checkpoints on the West Bank and Gaza.  The Palestinians are presented always as sympathetic victims. In one vignette, a woman is shown sending her children to make their way home by themselves because she lacks proper documents; in another, a man is shown trying to obtain medical help for his sick son; in a third,  viewers are shown a chaperone for a busload of children who cannot get permission to enter into Israel; in a fourth, ordinary people must deal with logistic hurdles of the checkpoint, delaying their shuttle between work and home.

While the film focuses on the indignities the Palestinians endure at these checkpoints — the spilling out of bag contents, badgering questions, insistence on proper documents, frustrating curfews — it fails to show how this is the obvious result of security measures designed to dissuade would-be terrorists and intercept suicide bombers. At one point an irate Palestinian asserts that no terrorists would come through the checkpoints anyway. This is false. The IDF has documented 928 Palestinians arrested at checkpoints through the end of 2004 for attempted terrorism or involvement with terrorist acts.

Indeed, the effectiveness of Israel’s security measures is well documented. In the 19 months prior to the implementation of increased security measures put in place in late spring of 2002, 83 suicide bombers succeeded in their missions out of 135 attempts. In the 29 months directly following these increased measures, only 53 bombers succeeded out of 432 attempts. The suicide bombers’ ability to infiltrate into Israel declined from 60% to 12%. Clearly the measures depicted so negatively in Checkpoint have helped reduce the likelihood of success for suicide bombers. It is equally evident that there continues to be no shortage of attempts. According to IDF statistics, the Palestinian terrorist organization Hamas alone launched suicide bombing attacks that killed 289 Israelis and injured 1649 between September 26, 2000 and April 17, 2004.

But the film makes no attempt to explore the dilemma faced by young Israeli soldiers who attempt to balance their dutry to protect their countrymen by ensuring that no terrorist slips by with their desire to behave in a humane and considerate manner toward the Palestinians. There is no attempt to engender any sympathy for these young soldiers. Not only are viewers kept in the dark about the reason for  Israeli security measures — the reason for the checkpoints are never given; Palestinian terrorism and suicide bombers are never discussed during the course of the 80-minute film — but there is no mention of the great personal risks faced by the soldiers.  The film does not make any attempt to convey the fear that looms over the interactions between the Israeli soldiers and the Palestinians at the checkpoints. There is no hint of the fact that, as Foreign Minister Shimon Peres indicated, “Israel is operating under a very difficult dilemma, as every easing of curfews and travel restrictions is followed by terrorist attacks against Israel.”
In fact, there have been several suicide bombings that occurred at checkpoints, killing the soldiers manning those areas. During the period that this film was produced, at least 5 suicide bombings and car bombings occurred at checkpoints. And not all the attacks  were perpetrated by Palestinian men. In 2002, more than 13 suicide attacks  were carried out or attempted by minors under the age of 18. And on January 14, 2004, just months after the filming was completed, a a suicide bombing  was carried out by a female suicide bomber who killed four Israelis at the Erez crossing checkpoint.   These facts, omitted in the film, would shed some understanding as to why security measures apply to women and children as well as men. But rather than provide this context,  the film chooses to focus only Palestinian travellers inconvenienced by the security measures and on the most callous of Israeli soldiers.
Viewers are thus provided with a unidimensional, negative portrayal of Israeli soldiers. In one scene, a guard arrogantly boasts “the Jews are the best”, while a fellow soldier standing behind him grins boorishly while crudely chomping on a snack. The guard proceeds to harass a young Palestinian woman. In another scene, an Israeli soldier compares the Palestinians to animals. No doubt there are young Israeli soldiers with such attitudes, but it is curious that the film consistently focuses on them rather than on the numerous other soldiers who  find such expressions by their colleagues repugnant.
By contrast, the film studiously avoids addressing the topic of the hateful and dehumanizing attitudes vocalized by Palestinian imams and on state-sponsored television and radio shows, which consider Jews the descendants of apes and pigs. There is nothing about the constant Palestinian Authority-sponsored incitement against Israel under which the Palestinian population labors.
Without mention of this incitement and the terrorist acts perpetrated by Palestinian men, women and youngsters, the film  obscures the fundamental difference between Israeli-manned checkpoints and those that exist at the borders between the United States and Mexico or between many other countries. For audiences far removed from the insidious threats the checkpoints were designed to counter, the film paints a deceptive picture of incomprehensible measures that seem mean-spirited. By failing to
enlighten the viewers with an understanding of the number of lives saved by such security measures, the film misses an opportunity to increase understanding of this complex situation. Instead it simply offers more fuel for incitement against Israel.