The Jerusalem Post has failed to correct the blatantly false claim that Israelis who haven’t served in the military, including most haredim, are forbidden to work. The July 7 Op-Ed by Daniel Beider, identified as an an ex-banker, fund manager and rabbinical CEO of Ohr Somayach, Johannesburg, falsely stated (“Maybe anti-haredi vitriol is the biggest threat to Israel – opinion“):

What many people are not aware of is that most haredim in Israel are NOT actually permitted to work according to Israeli law, since only one who has completed his mandatory IDF service may work. Haredim in other countries, however, ARE permitted to work, and therefore do work. (Emphasis added.) 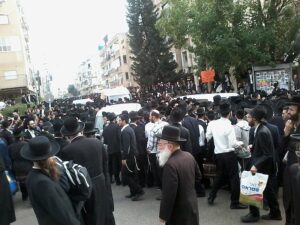 That highlighted claim is of course completely inaccurate. No such law exists and many citizens who did not complete army service, including Arabs and haredi women, do work. The Jerusalem Post itself has frequently reported on haredim in the Israeli work force. For example, The Jerusalem Post reported March 21, 2021, (“More haredim in Jerusalem looking for jobs in during pandemic, new data shows“):

New statistics on employment in Jerusalem indicate a growing demand by the city’s haredi (ultra-Orthodox) community to integrate in the general job market during this past year, characterized by challenges posed by the coronavirus pandemic.

The surprising trend was reflected in recent data published by the the Central Bureau of Statistics and Kivun Center.

The Kivun Center was established in 2014 as a joint collaboration between the Finance Ministry and the Jerusalem Municipality. It provides professional counselling and guidance to haredi individuals looking to work in Jerusalem, while maintaining their religious identity.

Data published by Kivun Center indicates more haredi individuals turning to employment counselling centers.
The center’s data shows that despite the mass layoffs that followed each wave of COVID-19 in Israel, some 1,587 haredi men and 785 haredi women were hired in Jerusalem during the pandemic, with 35% of them receiving a salary of NIS 7,500 or higher.

This marks a 35% increase in the number of haredi people employed in Jerusalem since 2014.

It’s disturbing that this basic factual error got past Jerusalem Post editors and that editors gave space to a writer to dispense his opinion on a subject about which he is so woefully ignorant. Even more disturbing is the fact that CAMERA repeatedly reached out to editors to point out the error, and yet The Post has still failed to correct.
Donate Now