CAMERA’s Israel office Friday (Oct. 2) prompted corrections at MSNBC’s “Morning Joe” after a broadcast contained basic factual errors concerning the construction of Israeli settlements in the West Bank and the contents of the Oslo Accords.

“The Trump administration has changed geopolitics” in the Middle East, opined MSNBC’s Keir Simmons in the Sept. 28 segment entitled “Trump Looks to Turn Israeli-Arab Accords into Votes.” “But look closely at the facts on the grounds and it’s clear the future president will have to deal with some harsh realities.”

Then, immediately after his call to “look closely at the fact on the ground,” he erred (approximately 4:30 minutes): “Over the past two decades over 600,000 Jewish settlers have built communities in parts of east Jerusalem and the West Bank, land promised to the Palestinians for a future state.”

Prominent critics of Israel agree with Indyk. In the New Yorker, Rashid Khalidi wrote, “In Oslo and subsequent accords, the Israelis were careful to exclude provisions that might lead to a Palestinian political entity with actual sovereignty.” Palestinian statehood, he continued “are never mentioned in the text.” Avi Shlaim stated in the Guardian that the Accords “did not promise or even mention an independent Palestinian state at the end of the transition period,” and reiterated in the Journal of Palestine Studies that “The most basic criticism [of the Accords] was that the deal negotiated by Arafat did not carry the promise, let alone a guarantee, of an independent Palestinian state.”

An earlier version of this article misstated a commitment of the Oslo accords, the 1993 agreement between the Israelis and Palestinians. The Oslo accords called for a negotiated settlement, but did not commit both sides to a two-state solution. 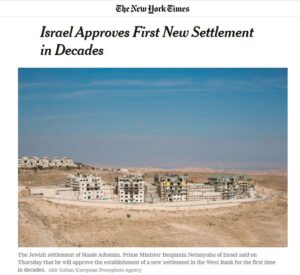 As for 600,000 settlers building communities “over the past two decades” — this, too, is 100 percent wrong. In fact, Israel has not built new settlements in the last two decades. As The New York Times reported in 2017: “Israel’s government on Thursday approved the establishment of a new settlement in the West Bank for the first time in more than two decades . . . ” (“Israel Approves First New Settlement in Decades”).

In response to communication from CAMERA, MSNBC concurred that a correction was necessary on both points. The following correction is posted both on MSNBC’s site and its YouTube channel, as the original broadcast appeared in both places:

CORRECTION: This report misstates the time frame during which Israeli settlements were established in the West Bank and East Jerusalem. Some actually date to the 1960s. And while the Oslo Accords did not promise land occupied by Israel since 1967 to the Palestinians, the Palestinians have long maintained that this land should be part of a future state.

The network did not broadcast a correction on the air.

A close look at Simmons’ report reveals that behind the reporter’s grandiose statements about “crucial decisions” that are “profoundly important,” lie additional misconceptions about the facts and realities in the region.

In a hyperbolic pronouncement, Simmons intoned: “President Trump along with his son-in-law and senior advisor Jared Kushner have been moving needles previously thought unthinkable and in way that are perhaps irreversible.” In that context, he cites the move of the U.S. embassy from Tel Aviv to Jerusalem, which was responsible, he said, “for shattering the long-held idea of U.S. support for a Palestinian capital in east Jerusalem.”

But did the embassy move preclude US support for a future Palestinian capital in east Jerusalem? Not according to Daniel Shapiro, President Obama’s Ambassador to Israel, who wrote in The Washington Post about the embassy’s relocation:

[N]othing about our embassy’s location there would prevent the emergence of a shared city with two capitals as part of a two-state solution. Perhaps inadvertently, President Trump’s decision has opened the door for much more frank discussion about an eventual Palestinian capital, and U.S. Embassy to Palestine, in East Jerusalem.

West Jerusalem has served as Israel’s capital since the founding of the state, and no plausible two-state map would change that. Our embassy’s presence in the city reinforces the legitimacy of historic Jewish ties to the city, which are too often denied by Palestinians.

In another departure from reality, Simmons misreported Secretary of State Mike Pompeo’s statement in the legality of settlement, stating, “The Trump administration recently recognized Israeli settlements in the West Bank as legal, going against decades of U.S. policy that have considered the communities illegal under international law.”

In November of last year, Pompeo had declared that Israel settlements in the West Bank are “not per se inconsistent with international law,” going against a U.S. policy that had been in place just three years — not decades — since then-Secretary of State John Kerry announced on Dec. 28, 2016 the re-adoption of the position taken by the Carter administration 38 years earlier of Israeli settlements as “inconsistent with international law.”

In 1978, the Carter administration categorically concluded that Israel’s establishment of civilian settlements was inconsistent with international law. However, in 1981, President Reagan disagreed with that conclusion and stated that he didn’t believe that the settlements were inherently illegal.

Subsequent administrations recognized that unrestrained settlement activity could be an obstacle to peace, but they wisely and prudently recognized that dwelling on legal positions didn’t advance peace. However, in December 2016, at the very end of the previous administration, Secretary Kerry changed decades of this careful, bipartisan approach by publicly reaffirming the supposed illegality of settlements.