Just how bad can media coverage of the Arab-Israeli conflict get?

In the cover story of Newsweek’s July 20 edition, author Miriam Berger wrinkles time and tramples facts by describing the so-called second intifada, a Palestinian campaign of suicide bombings and other violence, as “an uprising triggered by Israel retaking Palestinian cities in the West Bank.”

This is like saying the 1944 invasion of Normandy triggered the 1941 attack on Pearl Harbor.

Let’s look at the actual chronology: The second intifada began in September 2000, a few months after Palestinian leader Yasir Arafat rejected a peace proposal by President Bill Clinton. According to senior Palestinian officials, Arafat had planned the violence to increase pressure on Israel after the failed negotiations.

According to Newsweek, Israel’s attempt to end the ongoing intifada triggered the intifada.

The terror campaign had already claimed hundreds of Israeli lives when, in March 2002, a Palestinian suicide bomber entered a hotel dining room packed with Israelis celebrating Passover. Surrounded by elderly Jews and Holocaust survivors, he detonated his bomb, killing thirty people. Two days later, on March 29, Israel launching what it called Operation Defensive Shield, during which it retook Palestinian cities, including Tulkarm, where the Passover bomber lived.

So according to Newsweek, this Israeli operation to end the intifada was responsible for starting the intifada that had begun 18 months earlier. Anti-Israel activists often blame the country for Palestinian acts of violence. Rarely has their desire to deflect responsibility been so strong that it causes distortions in space-time.

This isn’t the only flagrant falsehood in the passage. The second intifada “cost the lives of 6,371 Palestinian[s] and 1,137 Israelis,” Berger insists, adding that “at least half of the victims” on both sides were civilians. In fact, when the campaign of violence ended in February 2005, half that number of Palestinians — roughly 3,000 — were killed, along with approximately 1000 Israelis. 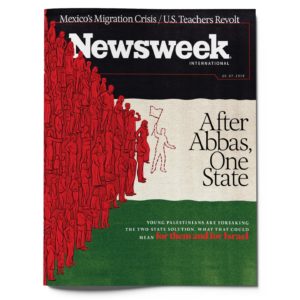 And although the vast majority of the Israelis were civilians, the same can’t be said for the Palestinians. As BBC put it, “There are no figures to show the proportion of Palestinians who were combatants and those who were civilians.” That’s because, along with the known combatants and known civilians, there were Palestinian casualties whose designation was unknown. (See, for example, this chart from part way through the fighting, and this breakdown from the end of the intifada.)

Additional errors plague the article. Berger claims the 1993 Oslo agreement between Israel and the Palestinians  “was intended as a five-year interim step toward the plan for a Palestinian state.”  In fact, it said nothing about a Palestinian state. Elsewhere she claims a Palestinian state had its “borders laid out in 1993’s Oslo Accord.” But those accords don’t establish any borders. Instead, they include borders among issues that are to be negotiated between the parties.

She asserts that Arab residents of east Jerusalem, which Israel captured from Jordan in the 1967 Six-Day War, “can’t vote.” In fact, they can vote in Jerusalem’s municipal elections, and those who have applied for and received Israeli citizenship can vote in national elections. (A vast majority have opted not to apply for citizenship. Roughly 40 percent of those who applied have been granted citizenship. Many others are still awaiting a formal response, delayed by what Israel says is a backlog caused by a recent increase in applications. While the author links to a 2016 Times of Israel article reporting that approvals have “all but stopped,” she ignores a 2017 follow-up piece by the same author noting a “surge” in the number of accepted applications.)

About Gaza, she wrongly claims Israel has “retained control of movement in and out” of the territory, although Israel has no control over Gaza’s border crossing with Egypt.

After CAMERA informed Newsweek via Twitter of errors in the piece, the troubled magazine amended the error about the timing of the second intifada, but in a violation of journalistic norms didn’t make note the change with a published correction. The other errors remain.