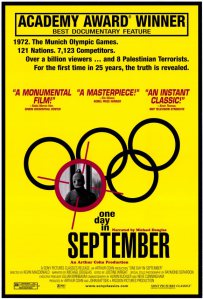 There has been much publicity surrounding Steven Spielberg’s 2005 film, “Munich,” which blurs the line between historical fiction and real events to tell the story of an Israeli hit team’s hunt for the planners and perpetrators of the 1972 Olympic massacre of Israeli athletes, casting doubt on the morality of counter-terrorist activity. (See Film Review: Munich)

By contrast, “One Day in September,” an Academy Award-winning1999 documentary, focuses on the massacre itself. The events of that day and their overall impact are told through live film clips, news broadcasts and interviews with police, close relatives of victims, and the sole surviving perpetrator. The film reveals the lack of vigilance on the part of the Germans, Israelis and Olympic authorities and exposes the cynicism and bungling that led to its tragic conclusion–all of which indicates the need for vigorous and aggressive counter-terrorist capabilities.

The film begins by tracing the separate paths of a victim and a perpetrator to their horrific convergence at the 1972 Munich Olympic Games. Israeli fencing instructor Andre Spitzer was celebrating his first year of marriage and the recent birth of a daughter. Spitzer, who lived near the border of Israel and Lebanon, regarded fencing as a means of building character and respect. Participating in the Olympics was the fulfillment of a dream. In Lebanon’s Shatila refugee camp–close geographically to Spitzer, but a world apart–lived Jamal Al-Gashey, a young Palestinian born into a bleak existence and raised on the credo of vengeance from an early age, who yearned to “confront the Israelis.”

A home video and photographs accompany the commentary of Andre Spitzer’s wife, Ankie, as she wistfully recalls the joy she and Andre shared in their new life together, “It was the most beautiful and wonderful year of my life.” She describes how Andre’s confident nature had a stabilizing and captivating effect on her.

The film abruptly turns to the dark narrative of Jamal Al-Gashey, interviewed in an unspecified location many years later who appears on camera in disguise. Al-Gashey describes growing up in the physical and spiritual poverty of a Palestinian refugee camp in Lebanon. “I thought there was no future for us, unless we returned to Palestine,” he explains. So he joined the Palestinian “liberation” movement and was given a gun and some training, feeling for the for the first time in his life truly “Palestinian.” There can hardly be a sharper contrast between the dour resentment that pervades Al-Gashey’s youth and the promise of Spitzer’s life.

At the start of the games, the Israeli team marches into the main stadium of the Munich Olympics, proudly bearing the Israeli flag, symbol of the Jewish people, in the birthplace of Nazism. The Germans, conscious of their violent militaristic past, had taken extra measures to create a relaxed and open environment. Police were banned from the Olympic village, and in their place were brightly jacketed unarmed security personnel.

For the Israeli team there were painful collective memories of the previous Olympics in Germany in 1936 under the glare of Adolf Hitler. One member, coach Yakov Springer, had lost his entire family in the Holocaust. He saw his arrival in Munich as an act of defiance against the Germans who had not been able to kill him during the Holocaust. He did not survive the 1972 Olympics massacre.

Most of the Israelis, like Spitzer, were excited by the opportunity to reach out to others. Ankie Spitzer describes how Andre struck up a friendly conversation with the Lebanese team. “You see, this is what I was dreaming about,” Spitzer told his wife.

Meanwhile, a group of Palestinians had arrived on the scene, staked out the premises, casually dined and then watched an Olympic volleyball match while waiting for their instructions.

In the early morning of September 5, the terrorists entered the first room of Israelis. The film describes the heroic action of Israeli athlete Moshe Weinberg, who risked his life trying to block the entry of the terrorists, and then, after being wounded, attacked one of the terrorists in the hall, allowing a fellow Israeli wrestler to escape. The Palestinians shot and killed Weinberg and dumped his naked body on the pavement below the building. The terrorists went on to shoot Joseph Romano, who also resisted, and then left him to bleed to death on the floor in front of the others.

The Palestinians demanded the release of 234 convicted terrorists being held in Israel, Germany and other countries. The Israelis refused on principle. Golda Meir, then Prime Minister of Israel, announced resolutely, “If we should give in, then no Israeli anywhere in the world could feel that his life was safe. Blackmail of the worst kind.”

The film spotlights the poor, half-hearted performance by the German police.It becomes apparent that had the Germans been prepared (apparently, a psychologist named Sieber had warned of just such an event happening), the nine Israeli captives would have had a good chance of surviving. The Israelis wanted to send a team in, but the German government rejected the request. ITN (Independent Television Network) reporter Gerald Seymour recalls how unprepared the Germans were. “They did not understand, one, how to respond and two, the mind-set of the people they were dealing with.”

The terrorists, however, clearly understood what they were trying to achieve, as Issa, the leader of the group, declared, “You offered us a showcase, and we have to use the showcase to show our [possibilities] to millions, even billions of people in the world.”

A unique aspect which could only be conveyed by film is the body language and facial expressions of the various interviewees. For example, the German officials at times betrayed a disturbing stolidness about the situation. Olympic village head Walter Troger explains how he might have even liked Issa in other circumstances and tells how he discussed the roots of the situation with the terrorist leader. General Ulrich Wegener, who is the most honest of the German officials in discussing the tragic mishandling of the situation by the Germans, nevertheless manages to joke about a specific event. Among the Israelis, however, there are no stoic moments, only despair and disbelief.

The narrator tells also of the callousness of the International Olympic Committee (IOC) who, throughout the drama, were interested only in the success of the Olympic games. (This is not surprising considering then-IOC President Avery Brundage had 36 years earlier played a role in removing Jewish athletes from the American team at the Berlin Olympics in order not to offend the Nazi dictator.) While demonstrations were held around the world urging the release of the Israeli athletes, the IOC remained unmoved, and athletic events continued. Athletes are seen sunning them
selves just 200 yards from the building where the Israelis were held.

Eventually, popular outcry forced the IOC to suspend the games but their the main objective and that of their German hosts was to resume the games as soon as possible. One official bluntly admitted, “The organizer of the games naturally wanted the games to resume as soon as possible, we had to find a resolution one way or another.” According to then-Israeli Mossad chief Zvi Zamir, “to move the team from the Olympic compound in order to let the games go on–this was the objective, the rescue was secondary.”

The Germans’s actions were fraught with missteps and miscalculations. The terrorists had requested an airplane to take them to an Arab country. Incredibly, a team of undercover officers, placed on the airplane to ambush the terrorists, voted to abandon their mission seconds before the terrorists arrived. This left only five improperly positioned police marksman on hand to deal with eight terrorists. Mossad chief Zamir, positioned near the snipers, doubted that the members of the sniper team were even sharpshooters. Meanwhile, the police chief “forgot” to call in armored car support that had been readied, until well after the fighting began. These failures doomed the Israeli captives. The marksmen missed their targets, and one of the surviving terrorists lobbed a grenade into one helicopter and fired his machine gun into the other killing all nine captives.

The tragedy was not over yet for the families of the captives. Erroneous reports indicated the Israelis had survived. The families’s hopes, buoyed by this report were dashed a few hours later when it was confirmed that all had been killed.

The documentary effectively transitions between a straightforward exposition of events and the tragedy’s impact on the athletes’ families. Schlomit Romano, Joseph Romano’s daughter, visibly restrains her emotions while discussing the father she never knew. Andre Spitzer’s daughter dutifully lays sunflowers at the grave of her father, whom she never knew.

The five slain terrorists were given heroes’funerals which were attended by a vast mob in Libya. The three surviving terrorists were exchanged for 12 male passengers who had been on board a German aircraft hijacked by Palestinians a few weeks later. It was widely believed, and later confirmed, that this was a setup engineered by the German government to extricate themselves from an embarrassing situation. Twenty six years later, the lone surviving terrorist, Al-Gashey, remained proud of his role in the murders because he believed it helped the Palestinian cause enormously.

“One Day in September” exposes the brutal face of terrorism and washes away the false equation of moral balance between the terrorists and the victims evident today in such films as Spielberg’s “Munich.” For anyone genuinely interested in what really happened at Munich, it is essential viewing.