The Economist is known for its unsympathetic portrayal of Israel. But its recent article “The Bedouin under Israeli rule have begun to campaign for their rights” (Nov. 5, 2011) goes beyond the usual slant and into the realm of propaganda by portraying the Israeli government’s attempt to address the problem of housing a growing population on already densely populated territory while preserving limited open land as akin to ethnic cleansing.
Resettlement of Bedouin into modern cities can be a wrenching process. But the sense of loss of a traditional lifestyle must be balanced with the benefits derived from access to electricity, water and sewage systems and other accoutrements of modern living. In its zeal to condemn the Jewish state, the article fails to give adequate or fair consideration to the difficult choices confronting planners who must grapple with the demands of an expanding and modernizing population while preserving Israel’s dwindling landscape. Instead The Economist reduces the issue to an Israeli land-grab scheme.
Israel has one of the highest population densities in the world and its population has doubled in 25 years. With a high birthrate, its population will grow by several million more in the next two decades. The Bedouin, traditional herders who reside in spread-out dwellings, have the highest rate of population increase of any group in Israel, several times higher than anything experienced in the United Kingdom or the rest of the West.
The Economist presents the Israeli government’s resettlement of Bedouin into cities as part of a program driven purely by ethnic chauvinism. But Israeli planners have long been forced to contend   with living space limitations foremost in their minds when constructing homes for the majority Jewish population in order to maintain adequate open space and agricultural land. The disruption of Bedouin lifestyle creates particular tension, but the state has an overriding responsibility to wisely plan for and accommodate its growing population.
In The Economist’s distorted view Israeli policy is depicted as a form of government-sanctioned ethnic cleansing. The article makes the absurd claim that “This may be Israel’s biggest removal of Arabs from the land since the 1948 war.” Not only is the comparison specious, it is false history because it has been shown that most Arab flight in 1948 was not due to Israeli compulsion.
It also employs inappropriate terminology to further dredge up the misplaced image of corralled native peoples. The terminology reveals the unbalanced and unfair view it promotes. Of the Bedouin, the piece states that the Israelis “pen tens of thousands of them into cities.”
The reality is different and more complex. An August 2008 report in The Telegraph did a much better job of balancing the different aspects to Israel’s policy, as this passage from the article shows:

This is the worst dry year for the Bedouin,” declared Suleiman al-Hathalin, standing among the ramshackle collection of tin shacks and tents that mark his family’s land at Khirbet Umm al-Khair, an unrecognised Bedouin village in the West Bank hills south of Hebron. “My father and my uncle had the chance to live a true Bedouin life. But I am being deprived of this and now so are my children. The life of the Bedouin, the freedom of movement – it’s finished.”
At present, most Bedouin tribes are still stubbornly clinging on, spending what little money they have on artificial feed for their animals rather than succumbing to government pressure to resettle into towns with running water and electricity

The Economist does not include any photographs of the cities that the Israelis “pen” the Bedouin into. The following photographs provided here show dwellings in the largest Bedouin city of Rahat. 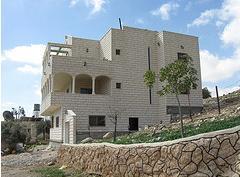 The obligatory condemnation of the Israeli “occupation” follows, although it is at best only tangentially relevant to the problem of relocating Israeli Bedouin. The author writes,

In the Israeli-occupied West Bank, soldiers knock down their shacks with abandon. Plans are afoot to transfer some 2,000 to the edge of a rubbish dump to make way for more Jewish settlers east of Jerusalem. To cap it all, religious Jews recently torched a mosque in Tuba, a Bedouin town in the north-east of Israel.”

Note: The published version of the piece misplaced Tuba in the West Bank.

A thoughtful editor might inquire whether home demolitions are really done by soldiers “with abandon,” or — as happens to be the case with the Bedouin — if they carry out specific directives after proper legal authorization has been received. At The Economist, such questions apparently are not asked. A balanced piece would have informed readers, too, that Jewish homes built without government authorization are also demolished.

The author condemns “religious Jews” for torching a mosque, rather than assigning blame to the few vandals who committed the crime. Criminal acts directed at minorities are not unique to Israel and the West Bank. They happen in Britain too, but one doubts The Economist describes them as the work of “secular Englishman” or labels the perpetrators as Church of England congregants.

The author launches into the imperialist-colonialist narrative, incorporating such phrases as the following:

Traditionally split into often feuding clans, the nomads have been easy for Israel to divide, conquer, shift and, at least in the Israeli
state’s early days, expel… .

Forced first into narrow enclaves and then into towns, they have generally downsized from camels to goats… .

Life in Israel proper is little better. Nearly half the Negev’s Bedouin live in villages often predating the state but officially unrecognised and so denied state support… .

The Bedouin once hoped to integrate. Unlike most Israeli Arabs, bar the Druze, some volunteered to serve in Israel’s army.

No doubt there are problems between the Bedouin community and the dominant Israeli culture. Such problems exist everywhere where traditional minorities come up against a dominant modern culture. In fact, many Bedouin serve in the army, and some, like ambassador Ismail Khaldi, serve in important government positions.

The article offers some Israeli explanations and arguments, but surrounds each one with posturing by Bedouin activists, like the statement by Taleb al-Sana, a Bedouin member of the Israeli parliament, who “warns of a Bedouin intifada if the planners persist.” It is apparent  that the author has already concluded that the Israeli government plans are simply a land-grabbing scheme and the story is written to fit the predetermined narrative.

It is a curious choice too, to focus on Israel’s difficulties in modernizing the Bedouin when right next door in the Sinai, a violent and troubling conflict grows between Bedouins and the Egyptian government. The bigger issue, the virtual impossibility of pre-modern nomadic cultures persisting with traditional ways in 21st century Western states — especially one as small and densely built-up as Israel — escapes The Economist’s notice. But it is in this context that Israel’s Bedouin relocation efforts must be seen.

As some of the comments from readers in the on-line talkbacks indicate, this piece should embarrass The Economist, which portrays itself as a sophisticated provider of news and analysis. But “The Bedouin under Israeli rule” reads like shameless propaganda.