Earlier this year, CAMERA researcher Dexter Van Zile wrote a lengthy (5,400-word) article about the Ecumenical Accompaniment Program in Palestine Israel (EAPPI), an organization founded by the World Council of Churches in 2002. In numerous articles Van Zile has documented how EAPPI activists have used their status as peacemakers to promote anti-Israel propaganda.

The article, which was published here at The Jerusalem Journal, a website edited and published by Brian Schrauger, was based in part on testimony from Israelis living in the West Bank and from information provided by NGO-Monitor. One source quoted in the article reports that EAPPI volunteers turn a blind eye to Palestinian violence and work assiduously to obtain and broadcast footage of Jews behaving badly. (None of this comes as much of a surprise given the information posted on the internet by EAPPI activists.)

The article also cites evidence that EAPPI activists engage in political activism in Israel (contrary to WCC rules) and have accompanied Palestinian extremist Hasan Breijieh as he harasses and tries to intimidate Israelis living in the West Bank, an action that seems contrary to the actions of a Christian ecumenical peacemaking organization.

The article also documents the relationship between the EAPPI program and the Jerusalem Inter Church Center (JICC) whose executive director Yusef Daher has posted anti-Israel incitement that valorizes Palestinian violence on his Facebook page.

In an effort to get the full set of facts surrounding the behavior of the WCC, Van Zile sent a list of complaints and allegations to the World Council of Churches to which the WCC graciously responded.

EAPPI posted these questions and WCC’s responses on its website here, stating: “The responses from the WCC, below, are available for all media who may have similar questions or concerns.” Interestingly enough, the WCC’s responses were posted on EAPPI’s website on June 10, 2018, several days before Van Zile’s article was published at The Jerusalem Journal on June 17, 2018.

Disconnect between what WCC says and What EAPPI activists do

As readers can see in the responses (provided by WCC communications director Marianne Edjersten) and The Jerusalem Journal article, there seems to be a disconnect between what the WCC says about the EAPPI program and what activists involved in the program actually do.

For example, the WCC says its activists do not engage in political activism, but EAPPI activists have posted images of themselves doing exactly this on their blogs. 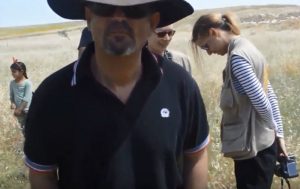 The man with the hat is Hasan Breijieh, a spokesperson for the Popular Front of the Liberation of Palestine (PFLP) who has screamed at Jews to leave their homes in the West Bank, declaring them illegal. On other occasions he has tried to provoke Israeli soldiers in the West Bank. In this screenshot of a Youtube video, Breijieh is “accompanied” by activists from the World Council of Churches as he attempts to intimidate an Israeli living in the West Bank.

The WCC says EAPPI activists do not affiliate with extremists who promote violence, but there is overwhelming evidence that EAPPI activists have regularly met with Hasan Breijieh, a PFLP spokesperson who authored a poem that incited murder of Israeli Jews.

Breijeh himself has posted video on his Facebook page documenting his harassment of Israeli Jews while EAPPI activists stand idly by.

And the WCC says it “does not tolerate hate speech by participants in the EAPPI program nor in WCC social media channels,” but Yusef Daher, the director of the WCC’s Jerusalem Inter-Church Center, who serves as an ex-officio member of the “Local Reference Group” that “provides guidance, advice and support” to the EAPPI program, has posted some aggressive words and images on the internet. What type of example is Daher, a WCC-staffer providing to EAPPI activists?

There seems to be a disconnect between how the WCC describes the EAPPI program and how EAPPI activists actually behave in the Holy Land, raising serious questions about just how much oversight the World Council of Churches provides to its so-called peacemaking program in the Holy Land.

Even people who support EAPPI have to come to grips with the possibility that the organization has been captured by anti-Zionist activists from the West Bank and their supporters outside the Holy Land.

In light of the apparent disconnect between the WCC’s description of the EAPPI program and what EAPPI activists are actually doing, Van Zile sent some follow up questions to the organization’s communications director, Marianne Ejdersten — the WCC staffer who had responded to the first set of questions.

Upon receiving the follow-up questions on June 11, 2018, Ejdersten declared that she would respond. But subsequently, the WCC said Van Zile should write the article with the information already provided. On June 14, 2018 after Van Zile uncovered information about the EAPPI activists visiting with Hasan Breijieh, he sent another email asking for a response. Breijieh’s behavior was truly appalling and it did not seem fair to include information EAPPI activists meeting with him without giving the WCC a chance to respond.

Here is the section from The Jerusalem Journal article that details the chronology:

A series of follow-up questions (which presented evidence and claims that served to contradict statements made in response to the first round of questions) were sent on June 11.

Ejdersten initially agreed to answer these questions, but on June 13, Peter Prove, Director of the WCC’s Commission of the Churches on International Affairs sent an email saying that WCC staff was too busy preparing for an upcoming meeting of the WCC’s Central Committee to be able to invest the time necessary to respond to the queries. “I suggest that you publish with the information you already have from us,” he wrote.

After this, this writer obtained numerous images and some videos that document persistent interactions between EAPPI activists and a particularly aggressive Palestinian Activist, Hasan Breijieh. In 2016, Breijieh wrote a poem lauding the potential slaughter of Israelis […] Subsequent emails were sent in an effort to elicit a response from the WCC. The emails were sent on June 14, 2018 and a few hours after they were sent, the WCC said it was looking into the issue. When and if the WCC responds to these concerns, the organization’s response will be posted.

On Aug. 1, 2018, CAMERA Van Zile sent a follow up email reminding Ejdersten of the follow up questions. Ejdersten replied stating that she will connect with WCC leaders “when everyone is back from holiday season in the end of August.”

In light of the seriousness of the issues at stake, CAMERA is posting the follow up questions Van Zile sent on June 11, 2018. The text of the email sent to Ejdersten on June 11, 2018 is posted below, available for anyone who may have similar questions or concerns.

As can be discerned from the questions, the author was trying to get at exactly how much oversight WCC staffers in Geneva exercise over EAPPI activists in Israel and the West Bank.

Thanks for these responses. They are very helpful.

Here are some follow-up questions, some of which relate to the oversight provided by WCC. What happens on the ground seems to differ with the instructions from the WCC. 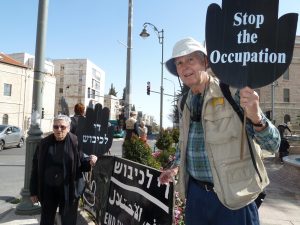 EAPPI activists protesting and carrying signs at a Women in Black Protest in Jerusalem. Participating in such protests appears to be a violation of WCC rules prohibiting political activism by EAPPI activists.

From where I sit, these images seem to contradict the response that EAs do not engage in political activism in Israel.

One of the things he added is that the IDF declared these communities closed military areas after the initial confrontations and that the EAPPI activists kept coming.

This seems to indicate that EA’s have ignored WCC instructions to “withdraw from any area declared on an ad hoc basis to be a closed military area.” [Aug. 1, 2018 Note: This in fact, may be incorrect. The arrival of Palestinians seeking to harass and intimidate Israelis living in communities in the West Bank (accompanied by WCC activists) is what may prompt Israeli security officials to declare, on an ad hoc basis, an area a “closed military area.” Hopefully, the WCC will clear this up in future correspondence. The underlying issue is that EAPPI activists seem to be lending Christian peacemaking cover to dangerous confrontations between Palestinians and Israelis that would not otherwise be happening if it weren’t for the presence of EAPPI activists from overseas.]

You stated that the WCC has no “knowledge or information” regarding confrontations on shabbat and that it has no information regarding EA’s who overstay their visas. I’ve seen evidence that at least one EA was deported for overstaying her visa. [Name redacted], the EA in question, spoke about it publicly on the internet.

ISM and Other Groups.

In the previous response, you stated that EAPPI’s involvement with the International Solidarity Movement is incidental. But in a 2012 article published by EAPPI, Mazin Qumsiyeh encourages people to join the organization. This indicates that there is a lot of overlap between EAPPI and ISM. There is also some evidence that EAPPI EA’s coordinate their work with Anarchists Against the Wall and Ta’ayoush. [Aug. 1, 2018 Note: In this video, the person standing in the background, behind the previously mentioned Hasan Breijieh has been identified as Kobi Snitz from Anarchists Against the Wall. In the June 11, 2018 response, Ejdersten stated: “WCC does not work with anarchists.”]

Is there a document or primer instructing EAPPI activists what to say to border control officials? Can you provide a copy of this document if it exists?

As you know I’ve been critical of some of the Facebook postings put forth by Yusef Daher. He seems to fan the flames of hostility toward Israel. And yet as part of his position with JICC, he is also involved with EAPPI.

Christian peacemaking institutions operating in the Middle East have an obligation to make sure their assets and personnel are not enlisted in a propaganda war against the Jewish state. By coming to grip with the issues raised by the questions listed above, officials at WCC’s headquarters in Geneva have a chance to make sure that the EAPPI program they support and manage is not used by Palestinian extremists and their allies outside of the Middle East to legitimize acts of violence against Jews in the Holy Land.