The San Diego Union-Tribune today printed an op-ed by Yuval Rotem, Israel’s Consul General to the Southwest, accompanied by (in fact wrapped around) a cartoon worthy of the notorious Nazi paperDer Sturmer. The cartoon, drawn by a freelancer according to the paper, showed an apparent murder victim on the ground with a large Jewish Star protruding from his back. Blood seemed to be flowing from the point where the Jewish Star was embedded in the victim’s back. 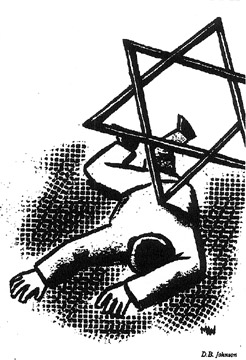 Whatever the intention of the cartoonist or the paper, the cartoon is extremely offensive and anti-Semitic. It defiles as a weapon of murder and a tool of violence the ancient symbol of the Jewish people.

The paper certainly would not publish a similar cartoon substituting as the murder weapon a Christian Cross or the Muslim Crescent Moon. Why then did it publish a cartoon defaming the Jewish Star and Judaism itself?

It is doubly offensive that this cartoon was used to illustrate the op-ed by Consul General Rotem. (The text of the op-ed is reprinted below.)

Since the days of Sir Isaac Newton schoolchildren have been taught that for every action there is a reaction, and that there is an axiomatic distinction between cause and effect. This truth applies both to the world of physics and to today’s conflict in the Middle East.

For over eight months, the citizens of Israel have been confronted with a virulent campaign of violence and terror. Israel, like any other nation, has a right and obligation to react in order to protect the lives of its citizens. The legitimacy of self-defense is a foundation of international law and of the United Nations Charter.

That both Israelis and Palestinians have suffered due to the current uprising, there can be no doubt. Yet while it may be easy to assign equal blame to the two sides, there is in truth no equivalence between the actions of Palestinian terrorists and the reaction of the Israelis whom they target.

If Chairman Yasser Arafat and other Palestinian leaders were to call for a cessation of shootings and bombings, an end to the violence would be well within reach. No such calls have been issued, and the Palestinians continue to shoot, and Israel is compelled to react. That anyone is killed is unjustifiable, but sometimes it is forgotten who exactly started the shooting, and who continues to deem indiscriminate killing as a legitimate bargaining chip.

Israel cannot sit idly on the sidelines while its people pay the ultimate price for the Palestinian leadership’s opting for confrontation over reconciliation. Palestinian leaders and militias consider violence to be an effective tool in promoting a unilateral solution to a conflict which Israel believes can only be addressed via bilateral negotiation.

Palestinian gunmen purposely select targets with the intention of maximizing carnage and shock value. Suicide bombers and explosive devices containing nails and shrapnel are employed in densely populated civilian areas. Israeli children and adults are maimed and murdered while shopping at the mall or riding on the bus.

Israel, forced to defend itself, undertakes operations designed to hamper further terror, striking only against those actively involved in violence. For the most part, Israeli reprisals against those initiating terror strikes are extremely accurate. However, sometimes unintended consequences have regrettably occurred.

There have even been instances when children have been injured. In the vast majority of cases, this takes place when Palestinian children are intentionally used as human shields serving as buffers for gunmen firing upon Israeli targets. Remember that the Israeli army is no longer deployed in Palestinian populated areas. In order for stone-throwing children to be within close proximity to Israeli forces, they have to be consciously transported to such locations by their elders.

Despite this brutal tactic, Israeli forces do their utmost to prevent casualties. Tragically, a totally innocent child, five-month-old Iman Haju, fell victim last week. She was unintentionally killed in Israeli return fire, which was directed at positions used by a Palestinian mortar crew to bombard an Israeli community just minutes earlier.

The fact is that terrorists have been consistently launching mortars from civilian sites such as school yards and apartment buildings. By contrast, Palestinian militants have routinely and specifically targeted Israeli children. Shalhevet Pass, a 10-month-old Israeli girl, was spotted, fixed and then shot in the head by a Palestinian sniper in March. In the past week, two 13-year-old Israeli boys were brutally stoned to death, and their bodies mutilated by terrorists while hiking in a riverbed close to their homes.

These are not cases of unintentional civilian causalities. These and other Israeli children were slain because their Palestinian executioners found them to be useful targets. Such heinous actions do not arise in a vacuum.

Since the Palestinian rejection of the proposals offered by former Prime Minister Barak and President Clinton, the Palestinian Authority has carefully orchestrated a campaign of hatred and incitement through its official newspapers, television and radio stations, its schools and religious institutions.

Palestinian Authority spokesmen have praised violence and suicidebombings. The Palestinian Authority has freed known terrorists from prison, and official Palestinian police and security forces have joined in attacks upon Israeli civilians with impunity. Palestinians have employed illegal mortars and anti-tank weapons against Israeli communities, and heavy arms such as Katyusha artillery rockets and shoulder-fired anti-aircraft missiles are now being smuggled into Palestinian territory.

The Palestinian leadership is doing nothing to prevent further escalation of violence, and the people of Israel are wondering just exactly what the Palestinians are trying
to achieve.

An end to the occupation? Some 98 percent of Palestinians already live under Palestinian control. Statehood and independence? It was offered and rejected. An end to check-points? More territory? It was offered and rejected. Not only were all attempts to genuinely settle the conflict rejected out of hand, but the Palestinians responded to them — instead of with counter-proposals for peace — with intifada, jihad and terror.

The current confrontation is one which Israel neither sought nor initiated, and still, there is no desire for punishment and revenge. There is no wish to suppress or repress anyone. What point does it serve?

Negotiation and education for peace are the only means forward, and hopefully a meaningful resumption of dialogue can begin again soon. In the meantime, the Palestinian leadership must be made to understand that terrorism and bloodshed cannot exist side by side with diplomacy.

The path of violence was supposed to have been forever abandoned on Sept. 13, 1993, when Chairman Arafat shook the hand of Israel’s late Prime Minister Yitzhak Rabin, and pledged in word and in writing to forswear achieving his goals by the sword. Though that day over seven years ago seems so remote, it must continue to guide all sides even now.

Terror will not bring the Palestinian people what they desire. They will not be able to gain through violence what they could not gain through negotiation. Only a return to talks and moderation can bring a mutually acceptable settlement for both sides.