Cross-posted from CAMERA’s BBC Watch
CAMERA’s new Arabic department has prompted an amendment to an article published last month on the BBC Arabic website.
Although the arrest of the leader of the banned northern Islamic Movement – Raed Salah – on August 15th did not receive any BBC coverage in English, the corporation’s Arabic language website published both a report on that story and a profile of Salah.
In that profile, readers were told that Israel often arrests members of the northern Islamic Movement for protesting against archaeological excavations in the vicinity of Temple Mount.
CAMERA’s Arabic department contacted BBC Arabic requesting a correction and pointing out that, contrary to the BBC’s claim, none of the legal action against the northern Islamic Movement or its leader has been related to protests against archaeological excavations: rather the group has been outlawed since late 2015 due to its links to Hamas, incitement and provocation of violence. 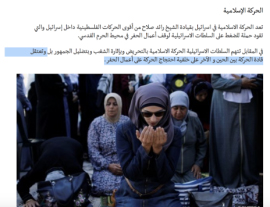 BBC editors subsequently amended the report and readers are now informed that “the Israeli authorities accuse the Islamic movement of incitement, instigating rioting and misleading the public.”
The original BBC report did not specify what alleged archaeological excavations had angered the protesters, but it is worth noting that Islamic Waqf has itself repeatedly carried out unauthorised excavations at the sensitive site.
Donate Now