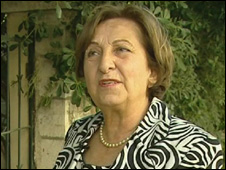 “This is my home – and I go out as a stranger. Why? I need someone to explain to me” – Claudette Habesch
BBC World News broadcasts, seen in the United States on BBC World News America, didn’t report on Israel’s Independence day celebration but did remember the Palestinian “Nakba” which occurs at the same time and in reaction to Israel’s Independence celebration. The May 14, 2010 newscast aired the Nakba report during the 7 PM (Eastern Time) broadcast.

Tomorrow, Palestinians will commemorate the day they call “Nakba” or catastrophe. It’s the day Israel was created in 1948. More than 700,000 Palestinians were displaced in the war that led to the creation of that new state and although more than six decades have passed, the scars are, of course, still very deep. Our Middle East correspondent, Paul Wood reports.

The report’s most poignant scene takes place in front of an attractive, tree-shaded villa:


WOOD: Her family fled this house in Jerusalem when she was a little girl and then lost ownership.
CLAUDETTE HABESCH: They did not leave by free will.

Ms. Habesch, the featured person of this news segment, is presented as an ordinary person who returns for a visit to her childhood home in Jerusalem.

A Bit of Fakery
But BBC neglected to inform viewers that Ms. Habesch is a media-savvy forceful advocate for the Palestinian cause as vice president and secretary general of Caritas Jerusalem, a Catholic humanitarian organization. Ms. Habesch has also been associated with groups condemning Israel and, as a Caritas executive, she has voiced anti-Israel polemics. For example, in a 2002 trip to Spain, she falsely charged Israel with “massacre of the Palestinian people” ( IPS-Inter Press Service, September 23, 2002). Yet Ms. Habesch has failed to speak up concerning the systematic persecution of her fellow Christian Arabs by Muslim Arabs which has caused Christians to emigrate from Muslim-dominated countries (including Palestinian areas) surrounding Israel. This is in sharp contrast with the situation in Israel where the Christian population has steadily increased. This trend has been documented by many authors including Justus Reid Weiner, a human rights lawyer and scholar-in-residence at the Jerusalem Center for Public Affairs (JCPA). In his December 2006 report, titled Christians Flee Growing Islamic Fundamentalism in the Holy Land, Mr. Weiner wrote:

The Christian population of the areas under the control of the Palestinian Authority has sharply declined in recent decades, as tens of thousands have abandoned their holy sites and ancestral properties to live abroad. Those who remain comprise a beleaguered and dwindling minority. In sharp contrast, Israel’s Christian community has prospered and grown by at least 270 percent since the founding of the state.

Perhaps BBC‘s motivation for failing to reveal Ms. Habesch’s true identity was to avoid the impression of one-sided, propagandistic content.

The remains of the Arab village of Lifta on the outskirts of Jerusalem. The inhabitants left in 1948. They were some of the 700,000 Palestinians for whom Israel’s birth meant dispossession. There are deserted Arab villages like this dotted all over Israel. The Palestinians insist on the right of those who fled and their descendants to come back. The Israelis fear that – that would mean the end of their country as a Jewish state. And so, the so-called “right of return” is one of the seemingly insoluble issues of the peace process.

But the BBC is deceptively omitting relevant facts concerning Palestinian Arab refugees and the forgotten Jewish refugees. The comprehensive CAMERA article, Palestinian Arab and Jewish Refugees, citing authoritative source material, shows that in the wake of Israel’s War of Independence in 1948, the overwhelming majority of Palestinian refugees were not expelled by the Israelis. But a much larger number of refugees, Jewish refugees who had resided in Arab countries for many generations, were forced to flee their native lands:

[N]ot withstanding a limited number of tactical expulsions, “a people” was certainly not expelled…Roughly half of those fleeing did so between November 1947 (when Palestinian Arabs responded to the United Nations partition recommendation with anti-Jewish violence) and May 1948 (when the armies of Egypt, Jordan, Syria, Iraq and Lebanon invaded Israel).

In large part, the Arab masses fled because they saw the Palestinian elite doing the same thing. In part, it was in response to exhortations by Arab military and political leaders that Palestinian civilians evacuate their homes un til the end of the fighting. Vast numbers were simply fleeing the heavy fighting that surrounded them, or that they expected to soon disrupt their lives. In some instances, Palestinians were forced from their homes by the Jewish military.

In a number of instances, the Jewish leadership appealed for the Arabs to stay put. The surprise announcement by the Palestinian leadership of Haifa that “the Arab population wished to evacuate” was immediately followed by a tearful plea by the town’s Jewish mayor, Shabtai Levy, for the leaders to reconsider…The British commander in Haifa, Hugh Stockwell, emphatically insisted that the Arabs were making a mistake, and also urged them to change their decision, which reportedly came from the Arab Higher Committee in Beirut.

Jewish Refugees from the Arab World
Between 1948 and 1951, as a result of the War of Independence, about 400,000 Jewish refugees were absorbed by Israel after being driven from their homes from Arab lands. In total, well over 800,000 Jews indigenous to Arab and Muslim countries lost their homes and property following Israel’s independence, roughly 600,000 of whom found refuge in Israel. Although the number of Jewish refugees and the total area of their lost land exceeded that of their Arab counterparts, the vaguely similar number of Jewish and Arab refugees has led some to describe the exodus of the two groups as a de facto population transfer.

Arab Refugees Have Been Invited to Return
In an essay published in Commentary in May 2001, Ephraim Karsh discussed Israel’s policy on Arab refugees:

In 1949, Israel offered to take back 100,000 Palestinian refugees; the Arab states refused. Nevertheless, some 50,000 refugees have returned over the decades under the terms of Israel’s family reunification program, and another 75,000 who were displaced from the West Bank and Gaza in the 1967 war have also returned to those territories.

Correspondent Wood Takes Viewers on a Walking Tour Ending at a Villa in Jerusalem
WOOD: For Claudette Habesch, 1948 is a year of painful memories. Her family fled this house in Jerusalem when she was a little girl and then lost ownership.
HABESCH: They did not leave by free will. We had two bombs here. My father had to take us out from here for security, for physical security. I wondered very often, who is sleeping in my bed? Who is playing with my dog?
WOOD: Her childhood friend, a Jewish woman (Ruthie), still lives next door.
RUTHIE: My parents rented this little house here from her parents.
HABESCH: This is my home and I go out as a stranger? Why? I need somebody to explain to me.

The answer to Mrs. Habesch’s question is rather obvious, though once again omitted by the BBC: Had the Palestinians and the Arab countries accepted the UN Partition Resolution, had they not declared an illegal war on Israel in violation of the UN Charter, and had they not invaded Israel, there would not have been a single Palestinian refugee. Instead, there would have been a Palestinian state side-by-side with Israel that would this year be celebrating its 62nd anniversary. In addition, the 6000 Israelis who were killed in the war – fully one percent of the population – would instead have gotten to live, to go back to their families or to start families.

But because the Arabs were more interested in destroying Israel than creating Palestine, millions of people – both Arabs and Jews, have had to suffer through unnecessary wars and untold misery.

And that is the response that the BBC might have challenged Mrs. Habesch with, and perhaps in return they would have gotten an interesting answer. Of course, the BBC did nothing of the sort.
A Bit of Historical Revisionism
Correspondent Wood provides a segue to an appearance of Israeli revisionist historian Tom Segev: “The Israeli narrative of 1948 says the Palestinians left of their own accord. The Arab narrative says they were forced out.“

SEGEV: Half of the something like 750,000 Arabs left and about half were expelled. So, in a way both narratives are right. The basic dream of the Zionist movement is to have maximum land with minimum population. When the war broke out it was obvious to everybody that whoever wins will expel parts – at least parts of the population. So, that was obvious because 1948 is not the beginning of the conflict.

The problem with Segev’s “basic dream of the Zionist movement …” is that it is largely a myth of revisionist historian critics of Israel like Segev. Where is Segev’s evidence for the claim that in effect says the Zionists believed that there was not enough land to justify allowing the Arabs to remain? In fact, there’s evidence to the contrary. For example, in “Fabricating Israeli History” by Ephraim Karsh (published in 2000), the author quoted Israel’s first Prime Minister, David Ben-Gurion, in a letter to his son Amos, “All our aspiration is built on the assumption – proven throughout all our activity – that there is enough room for ourselves and the Arabs in Palestine.”

KAY(ending the report): A conflict decades old and still very much unresolved.

Obviously, anyone seeking an accurate, unbiased explanation of the “Nakba” (and related matters) is unlikely to find it at BBC News.