Among the copious BBC News website coverage of the March 22 terror attacks in Brussels was an article by Home Affairs correspondent Tom Symonds,“Brussels attacks: Airport security under the spotlight again” which opened as follows: 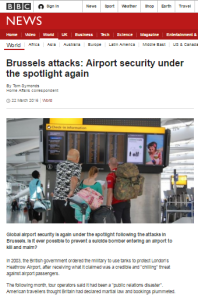 Global airport security is again under the spotlight following the attacks in Brussels. Is it ever possible to prevent a suicide bomber entering an airport to kill and maim?

What followed was a fairly superficial discussion of the security measures employed at airports which could have been written by anyone who has ever travelled by air. The topic then turned to differing approaches to security and, predictably, the measures employed at Israel’s international airport came up.

Ben Gurion airport in Tel Aviv, often cited as the world’s most secure, relies on profiling. Passengers are closely watched and intensively questioned about who they are and where they are going.

It works because it allows a more fluid and less predictable line of security.

However, Symonds then went on to tell his readers:

But it is a technique often criticised as “politically incorrect” because only those without white faces, travelling to and from “non-western” countries, face more scrutiny.

Passengers complain of being forced to answer personal questions or even hand over personal items deemed to pose a risk. It can be highly intrusive. [emphasis added]

That modus operandi would no doubt sound quite logical to anyone more worried about getting blown up than political correctness but nevertheless, readers of this stocking-filler piece – obviously intended to fluff up the volume of coverage on a particularly busy news day – went away with the inaccurate notion that security checks at Israel’s main airport depend upon the colour of one’s skin.

BBC’s ‘From Our Own Correspondent’: Israeli airport security ‘Kafkaesque intimidation’ and ‘mind-games’