Ben & Jerry’s recently issued a statement that it will be ending sales of its ice cream in what it refers to as the “Occupied Palestinian Territory,” a particularly troubling decision in light of the fact that the Vermont-based company makes ice cream within pre-67 Israeli territory, and doesn’t operate manufacturing plants or scoop shops in Judea and Samaria.

Though Ben & Jerry’s statement has been widely covered in the international media, most reports have narrowly focused on how the decision affects Israel, and the reaction of Israeli and Palestinian leaders. They have neglected to provide substantive background on the boycott, divestment and sanction movement (BDS) that the ice cream seller endorsed and have completely omitted the views of and impact on diaspora Jews. 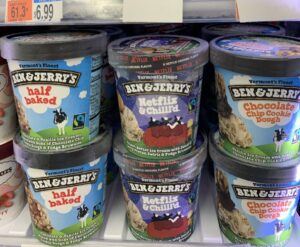 Media outlets that provide background on the BDS movement routinely omit their true goals, claiming that they merely are critical of Israeli policies in the West Bank, or seek their withdrawal from the West Bank and “east” Jerusalem. For example, the New York Times coverage of the Ben & Jerry’s announcement said, “Among other goals, organizers of the boycott movement want Israel to end its occupation of all the land captured in 1967 and dismantle the barriers that separate Israel from much of the West Bank and divide many Palestinian neighborhoods.” Omitted is the fact that the security barrier it demands be “dismantled” was built to prevent suicide bombers from attacking innocent Israeli civilians – and has succeeded. Also omitted are the calls for a “right of return” for “7.25 million Palestinian refugees” – the overwhelming majority of whom are not refugees at all but merely descendants of refugees. This is widely understood as a strategy to overwhelm the world’s only Jewish-majority state and turn it into another of many Arab and Muslim-majority states.

In fact, BDS movement leaders state clearly that they would never accept the continued existence of a Jewish state within any borders – a denial of the Jewish right to self-determination which is codified as antisemitic by the widely-accepted IHRA Working Definition of Antisemitism. CAMERA has also extensively documented the explicit antisemitic rhetoric of many BDS activists, which includes Holocaust denial, the promotion of modern day blood libels, supporting terrorists and inciting the murder of Jews. Such hateful rhetoric is extremely relevant, as polls have demonstrated that those, such as BDS activists, who hold extreme anti-Israel views are dramatically more likely to also hold classic antisemitic views than the general population. Antisemitism within the movement isn’t a bug. It’s a feature.

Most media outlets covering the Ben & Jerry’s decision have omitted the antisemitic aims of the BDS movement and virtually all have ignored the views of Jews living outside of Israel, and the impact of the BDS movement on their daily lives. For instance, an article on the Ben & Jerry’s boycott in Times of London claimed that the only ones who are hostile to BDS are Israelis and “the American right.”

The fact is that the overwhelming majority of Jews living outside of Israel are not only hostile to BDS but believe that it’s antisemitic. A major EU poll of European Jews (including Britons) conducted in 2018 showed “82% of Jews classed calls by non-Jews to boycott Israel or Israelis as anti-Semitic.” A poll of British Jews by the Campaign Against Antisemitism in 2020 found that “83% felt intimidated by tactics used to boycott Israel.” And, a poll in 2020 by Pew Research Center found that “the vast majority [of American Jews] who have heard of the [BDS] movement say they oppose it,” with only 10% supporting it.

The absence of information regarding the views of Jews about Ben & Jerry’s endorsement of BDS is especially striking given the troubling events in major cities with large Jewish populations during the May war between Hamas and Israel. In cities like London, New York, Boston and Los Angeles, there was an unprecedented rise in antisemitic incidents, the overwhelming majority of which appeared to have been motivated by the demonization of Israel by pro-Palestinian, pro-BDS activists. This included extreme antisemitic rhetoric, the desecration of synagogues, acts of intimidation and physical attacks on Jews.

Among the most biased and inflammatory news stories was that in the Boston Globe which focused primarily on the Palestinian perspective favoring BDS, repeatedly quoting Palestinian Wafic Faour, a member of Vermonters for Justice in Palestine, who termed Israel an apartheid state and praised the Ben & Jerry’s action as a positive, though inadequate step. Israel’s perspective was, by comparison, included minimally – along with distorted references to settlements and the recent Gaza conflict. There was no hint about the antisemitic nature of BDS and the ramifications for Jews in promoting lies related to the BDS campaign. Boston was the scene of the stabbing of a rabbi in recent weeks by an Egyptian-born assailant with a record of antisemitism. There was no reference to this event either.

The ADL reported that it received a 75 percent increase in reports of antisemitic incidents during the two weeks of the conflict, compared to the two weeks before the fighting began. Most of those appeared to have been motivated by extreme anti-Israel views of the perpetrator.

In the UK, the Community Security Trust (CST) recorded 628 antisemitic hate incidents from May 8th to June 7th, “the highest number CST has ever recorded in any month-long period, and roughly four times the number of antisemitic incidents that would normally be expected during this period.” Their report found that 90 percent of the incidents “involved language, imagery or behavior linked to the conflict in Israel and Gaza.”

In New York City, a Jewish man was brutally beaten by a group of anti-Israel protestors in Times Square, while in Los Angeles, a group of Jewish diners at a kosher restaurant were assaulted by a group waving Palestinian flags. In the UK, jihadist groups protesting Israel chanted for Jews to be murdered. A pro-Palestinian convoy drove through a Jewish neighborhood in North London with one occupant of the vehicle shouting through a loudspeaker “f**k the Jews,” “f**k their daughters,” “f**k their mothers,” and “rape their daughters.” CST also recorded 33 physical assaults on Jews during the war, including one vicious attack on a rabbi in Essex.

It’s also important to note that this outbreak of hatred towards Jews isn’t unique. Such surges of antisemitism almost always occur when anti-Israel activism surges during Israeli conflicts with Hamas – this one, however, was even more severe than what we’ve seen in the past – even though the conflict was briefer and the casualties substantially fewer.

It’s irresponsible of media outlets to ignore the toxic ideology and real-world impact on Jewish lives of BDS while covering the Ben & Jerry’s decision to stop selling their product to Jews in Israeli communities across the Green Line. It’s hard to imagine outlets failing to hold another political movement to account if their advocacy so dramatically and obviously fueled bigoted verbal abuse and outright violence against a historically oppressed minority. Media outlets covering the Ben & Jerry’s compliance with the movement to boycott the Jewish state must provide news consumers full, accurate information on the bigoted goals and ideology of BDS, and the danger their activism often represents to the Jewish community.