Graham Vick        Singer in role of Moses       bin Laden
This misuse of a classic artistic work, happening during an alarming rise in antisemitism in Europe, apparently is meant to indoctrinate people with the idea that Israel is the villain in its conflict with the Palestinian Arabs. Judging by audience reception, the attempt seems to have succeeded. All the music is from the great Italian opera composer Gioachino Rossini and the words sung are those of Rossini’s librettist but everything else in this production of Rossini’s nineteenth century masterpiece Mose in Egitto (Moses in Egypt) is from director/producer Graham Vick and set/costume designer Stuart Nunn.
Their anti-Israel agenda is evident in this production. A video recording (from Opus Arte) released in 2013 and reviewed in the August 2013 issue of prestigious Opera News (from Metropolitan Opera Guild of New York City) has brought to light the production performed at the August 2011 Rossini Opera Festival in the composer’s home town of Pesaro. The production was a huge success in Europe.
The opera’s Italian libretto, based on passages from the Bible’s Book of Exodus Passover (Pesach) story, depicts Moses’ efforts to persuade Pharaoh to free the Israelites from bondage. Rossini had also added a fictitious non-biblical romantic angle involving Pharaoh’s son and his Israelite girlfriend. This production provides the opera’s wonderful music and libretto sung gloriously by a splendid cast. However, Vick and Nunn have been unfaithful to Rossini’s plot by representing through appearance the ancient Egyptians as modern Arabs (including Pharaoh and his son), the Israelites as terrorist-like and Moses, sung by bass Riccardo Zanellato, as an Osama bin Laden-look-alike terrorist leader toting an assault rifle. But Vick makes sure Moses is easily recognized as a Jew since he also always wears a tallit (Jewish prayer shawl).
Rossini’s act one portrays Egypt plunged into the deepest darkness, a punishment inflicted upon Pharaoh and his subjects by God because Pharaoh has broken his promise to Moses to free the Israelites to leave for the Promised Land. Pharaoh calls for Moses and all call on the God of Israel. Pharaoh recognizes the vengeful hand of a god, realizing too late his power and promising to let the Israelites go. Pharaoh asks Moses to remove the darkness. Moses calls on God and, at the stroke of his staff, light suddenly returns, to general joy.
The Met’s Opera News reviewer Fred Cohn writes that Vick turned the opera

into a parable about contemporary Mideast politics [that] is so invasive that it makes the work itself, with its bountiful musical invention, seem inconsequential. … [The opera] ends, after the escape through the Red Sea, with an orchestral postlude depicting God’s grace; here, the passage accompanies a young Palestinian boy as he straps himself up for a suicide bombing and approaches an Israeli soldier. Can Vick possibly even have heard Rossini’s grand and noble music?

Vick’s variant of the ancient blood libel against the Jewish people
Vick updates the ancient and infamous false accusation that Jews murder non-Jews, especially Christian children, in order to obtain blood for the Passover or other rituals. This update is a diabolical reversal of the story in the Bible’s Book of Exodus. God instructed the Jews to mark their homes so their first born would not be killed by the avenging angel of death after Pharaoh refused to let the Jewish people leave Egypt. The Jews spread the blood of an unblemished slaughtered lamb on their doorposts. In this opera production, ancient Egyptians (in traditional Arab garb) are marked with blood to designate death in their family. 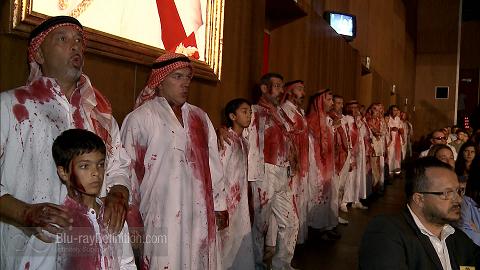 Vick interviewed in an “extra” section of the video, is seen saying: “A person is seen as a terrorist by one side and as a freedom fighter by the other.” (Only if one person’s leecher is another’s physician). The FBI definition of terrorism is: “Unlawful use of force or violence against persons or property to intimidate or coerce a Government, the civilian population, or any segment thereof in furtherance of political or social objectives.” If rule of law matters, then this matters, in theater as well as court. Contrary to Vick’s cliché, one person’s terrorist cannot be another’s freedom fighter.

Vick commented on the opera’s set design: “Obviously it’s today’s separation barrier on the West Bank and Gaza, but it also represents the Wailing Wall in Jerusalem. When you create a [separation barrier] wall like this, you also create a prison for yourselves.” Vick’s confused notion ignores the fact that the barrier was constructed to reduce the frequent Palestinian deadly terrorist attacks on Israeli civilians. That it was successful and justified is indicated by the sharp decrease in such attacks and, among other things, no doubt preserving the lives of some who pray at the Western (since returning to Jewish control in 1967 no longer the “Wailing”) Wall.

Vick plays with the psyches of the audience
He seems to want the audience to imagine that the Israelites of 3000 years ago in Egypt were complicit in the death’s of the other side’s children (plague of the first-born children – the final of the plagues visited upon the Egyptians) just as today’s Israelis are allegedly responsible for supposed deaths and disappearances of Palestinian Arab children.
Vick wants people to think of today’s Palestinian Arabs seeking to be free of Israel (when most already are ruled by the Palestinian Authority or Hamas, both of whose propaganda calls for Israel to be free of Jews) when they imagine the ancient Israelites seeking to be free of the Egyptians.
He wants the audience to think of today’s Palestinian Arabs using terrorism when they imagine biblical Israelites allegedly using terrorism against ancient Egyptians. He wants people to think of Palestinian Arabs seeking to overcome Israel’s security barrier (imposed against terrorism) – when they imagine ancient Israelites escaping Egypt through the miraculously opened barrier of the sea. He wants them to think of al-Qaaeda leader Osama bin Laden when they imagine Moses using (allegedly) terror tactics in leading the Israelites. Vick attempts to accomplish this through stage set design, costumes, wall posters and the appearance of blood-spattered actors in the audience.
The audience experience
Upon entering the hall, the audience notices that the walls are covered with photos of Arab children. The captions on the photos – include surprisingly in English – “Missing.” The opera begins with a man (ancient Egyptian) wearing blood-spattered Arab attire, slowly walking across the stage set carrying the body of a lifeless child. The first words sung are the chorus’ “Ah! chi ne aita?” (“Ah, who can help us?”). Simultaneously, a figure dressed in blood-spattered Arab attire appears at the audience front row. He leans over a spectator to show a photo of a missing (or dead) child. Soon, approximately twenty mournful actors appear at the back of the audience wearing blood-spattered Arab attire (see photo above).
There is much unintended irony in having ancient Egyptians outfitted as modern Arabs including male singers and actors wearing keffiyehs, a traditional Bedouin headdress. Keffiyehs are now commonly seen throughout the Arab world and were popularized in the West by the late Palestinian terrorist leader Yasser Arafat. Inconveniently for Vick’s heavy-handed polemics, Egyptians of 3000 years ago were not Arabs. The descendants of pharonic Egyptians in Egypt today are primarily Christian Copts (ten percent of the population and from whose name the English word “Egypt” derives). They have been persecuted severely for decades by members of the majority Muslim Arab community.
Recent anti-Israel, anti-Jewish operas
CAMERA has previously reported on anti-Israel propaganda in opera productions including Moses and Pharaoh (a variation of Moses in Egypt) which was composed by Rossini in 1827 and first performed in that year. An anti-Israel, anti-Jewish re-working of the opera was staged in August 2009 at the prestigious Salzburg (Austria) Opera Festival by the Festival’s director, Jurgen Flimm. The November 2009 issue of Opera News magazine described the anti-Israel message of  Flimm’s production:

In interviews, Flimm had announced that the biblical story couldn’t be told today without mentioning the ongoing conflict between Jews and Arabs. So instead of watching dancers during the ballet music, we had to read quotations from the Bible on the closed curtain, demonstrating the vindictiveness of the Hebrew god. When the “ballet” was over and the curtain rose again, the stage was covered with dead children — probably an allusion to the Gaza war. To balance the message, the Israelites arrived for the finale with suitcases filled with ashes. No Red Sea had to be crossed; they simply disappeared through a back door.

A prominent opera Web site reports that two Israeli artists employed in the Rossini Opera Festival were outraged at Vick’s version of the opera. Soprano Hila Baggio and pianist Maria Nikitin both took issue with Vick’s interpretation. The danger “is that people don’t know how to distinguish and maybe one starts to think that the Israelis are responsible for these things” and it feeds the antisemitic climate that “in recent years is in huge growth in North Europe.”

Baggio said, “… the idea to transform Moses – who for us is a really important figure – into Bin Laden, is offensive.” Nikitin saw the general rehearsal and said, “the first scene is like Quentin Tarantino, with people bloody as they wander into the theater,” describing how the action is also on the sides of the auditorium as well as the stage. Vick’s hijacking of the Exodus story as told in the Bible and as scored by Rossini, transforming the Israelites into terrorists and ancient Egyptians into Palestinian Arabs “has nothing to do with the story of Moses, and not even with what’s going on in the Middle East.” She said that the Israelis have never committed an act of terrorism as depicted by Vick: “It’s never happened in our history.”

Why are such propagandized opera productions significant?
Watching this video, one is struck by the enthusiastic and appreciative audience throughout the 150 minutes of the opera. Audience members react not only to the gorgeous music and singing but also to the non-traditional set design, costumes, and bloodied actors among them. Grand opera tends to be a popular art form in Europe, much more so than in the Western Hemisphere. It’s not only an opera’s grandiose musical aspect that affects audience’s psyches and emotions but also the plot and its message – amplified or distorted through the set design and costumes. This in turn is subject to reinforcement by opinion molders (teachers, journalists, media personalities and so on who are interested in theater and often who tend to lean to the post-liberal left and its anti-Israel fetish). These propagandized opera productions are at once both symptomatic of and probably (at least in a minor way) contributing to the increase in antisemitism in Europe.
Short video clips of this Vick production can be viewed here, here, here, and here.
Donate Now