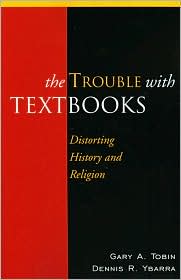 “It is shocking to find the kind of misinformation we discovered in American textbooks and supplemental materials being used by schools in every state in the country,” said Dr. Gary A. Tobin, president of the Institute for Jewish and Community Research, based in San Francisco.

The book, released by the IJCR, is the result of a five-year study conducted by Dr. Tobin and co-author Dennis R. Ybarra, who examined 28 textbooks on history, social studies and geography. They noted at least one of these textbooks is used in schools in all 50 of the United States.

The investigation uncovered 500 misrepresentations about Islam, Christianity and Judaism, including disparate treatment of the three religions. For instance, the authors found that the teacher’s overview for World Cultures and Geography: Eastern Hemisphere and Europe (McDougal Littell) suggests that “Judaism is a story of exile” and “Christians believe that Jesus was the promised Messiah.” In contrast, about Islam, the same textbook stated: “The Qu’ran is the collection of God’s revelations to Muhammad.” (Emphases appear in The Trouble with Textbooks: Distorting History and Religion.) The authors note that the wording dealing with Judaism and Christianity implies those religions are based on fables, whereas the language about Islam suggests that it is a religion based on fact and should be treated with due reverence.

Likewise, the glossary entry regarding Judaism found in World History: Continuity and Change (Holt, Rinehart and Winston) states: “Ten Commandments: Moral laws Moses claimed to have received from the Hebrew God Yahweh on Mount Sinai.” The glossary entry for Islam, on the other hand, is definitive: “Qu’ran: Holy Book of Islam containing revelations received by Muhammad from God.“
Tobin and Ybarra note: “Many textbooks serve as apologists for Islam in a way that they do not for Christianity, Judaism, or any other major religion. No religion should be presented in history textbooks as absolute truth, either on its own or compared to any other, or they all should be.”

The study also discovered the omission of important historical facts. For example, regarding the issue of Palestinian refugees, no reference is made to the Jewish refugees expelled from Arab lands in the wake of the founding of modern Israel. In addition, some school textbooks suggest incorrectly that Israel, rather than Arab governments, placed Palestinian refugees in camps in Arab countries. For instance, McDougal Littell’s World Geography suggests:

Caught in the middle of this turmoil were Palestinian Arabs….Many of these people had roots in Palestine that went back for centuries. They either fled their homes or were forced into UN-sponsored refugee camps just outside Israel’s borders. The land designated for Palestinians on the West Bank and Gaza Strip is under Israeli control.

these people [Israelis]…shoved us in refugee camps.

In reality, most Arab states sought to prevent the resettlement and integration of Palestinian refugees into their societies, confining them in camps. Only Jordan enabled Palestinian Arabs to attain citizenship and equal rights. Lebanon, in contrast for example, has compelled Palestinians to remain in festering refugee camps where they have endured discriminatory treatment.
The study’s authors also discovered that some textbooks imply Israel was never actually attacked by Arab countries. Instead, in some cases textbooks suggest that Israel started the wars while no responsibility was attributed to Arab states. Take for example the Arab World and Islamic Resources’ (AWAIR) publication Arab World Studies Notebook and its description of the 1948 Arab-Israeli War:

The language employed in this instance insinuates that Israel is the aggressive party while the Arab states are simply defending Palestinians.

In contrast to their overemphasis on Jewish violence, many textbooks and some supplemental materials consistently reflect the Arab narrative that seeks to push the consistent and widespread use of terrorism by the Palestinians against Israel far into the background.

In a clear factual error, World Cultures: A Global Mosaic (Pearson/Prentice Hall), states, “Jesus, the founder of Christianity was born in Palestine while it was under Roman rule.” The book adds: “According to the Gospels, Jesus grew up in Galilee, a region in northern Palestine.”
As the New York Times explained in a June 20, 2008 correction, the land in which Jesus was born and raised did not become known as Palestine until more than 100 years after his death. In 132 (Common Era or AD), approximately 100 years after the crucifixion of Jesus, the Jews fought against Roman rule for a second time in what is known as the Bar Kochba Revolt. After the Romans defeated the rebellious Jews in 135, they renamed the land of the Jews Palestina to punish the Jews and to make an example of them to other peoples considering rebellion. The Romans took away the Jewish name, Judea, and replaced it with the name of an ancient enemy the Jews despised. The Philistines were an extinct Aegean people whom the Jews had historically loathed as uncultured and barbaric.

IJ
CR’s analysis documented in some textbooks “stereotypes of Jews that have often been used to foster classical anti-Semitism. Jews are described as legalistic and Judaism is portrayed as merely an overlong list of arcane rules, devoid of any spirituality.”

Jewish arts and sciences were relatively underdeveloped compared with those of their more sophisticated and richer neighbors. Excepting the Old Testament’s poetry, the Jews produced very little of note in any of the art forms…. There is no record of any important Jewish contributions to the sciences.

Contrary to the suggestion that “the Jews produced very little of note in any of the art forms” Jews have always been involved in art, but religious dictum – specifically the second commandment “Thou shalt not make for thyself any graven image” – did not allow Jews to produce any figurative art that might lead to idol worship. Instead Jews created richly designed holy garments, religious ceremonial objects and synagogues. In fact, one of the first Jewish artists was Betzalel, an accomplished stonecutter, woodcutter and metal worker who was commissioned by Moses to build the Tabernacle for the Ark of the Covenant. Due to persistent persecution and exile throughout the centuries, Jews were often unable to preserve much of their art.

Regarding the sciences, Jews undertook great measures to preserve and promote prophylaxis and hygiene from biblical times. In fact, 213 of the 613 Mitzvot (or commandments) pertain to medical issues ranging from dietary regulations to personal hygiene. Certainly Jews learned much from their neighbors, specifically Egypt which was medically advanced. However, Jewish culture contributed a great deal in its own right to the sciences by planting the foundations for basic and fundamental living practices that promote human well-being.

The Role of Advocacy Groups

Tobin and Ybarra provide critical insight into the role that advocacy groups play in the publication and distribution of textbooks in the United States:

For example, the Council on Islamic Education (CIE), in addition to publishing a few supplemental materials, organizes both its own workshops and sponsors others at teacher conferences. CIE, as well as other advocacy groups, supply the personnel, the materials, and the perspective on their particular topic which can be translated into a message of “truth” in the classroom. We have attended a sampling of such workshops and trainings, interviewed teachers who have attended them, and scrutinized the materials and messages— they comprise a specific narrative about Islam, Israel, and the Middle East. [sic]

The CIE’s “specific narrative about Islam, Israel, and the Middle East.” according to Tobin and Ybarra, is the promotion of Islam as the supreme religion, over Christianity and Judaism.

Tobin and Ybarra further explain this “specific narrative” with an observation made by the historian Bernard Lewis:

We live in a time when great efforts have been made, and continue to be made, to falsify the record of the past and to make history a tool of propaganda; when governments, religious movements, political parties, and sectional groups of every kind are busy rewriting history as they would wish it to have been, as they would like their followers to believe that it was.

The authors explain how, understandably, interest in Islam spiked after the September 11, 2001 attacks, and how, since then, some advocacy groups hold increasing sway in the world of K-12 textbook publishing.

In 2002, the Council on American Islamic Relations (CAIR) sought to counter perceived negative stereotyping of Muslims by introducing a program that would, in CAIR’s words, “put quality materials about Islam in all 17,000 public libraries in the United States.”

CAIR is a problematic source for reliable information on Islam. The Justice Department listed the organization as an unindicted co-conspirator in a terrorism funding trial, CAIR founders had ties with the extremist Muslim Brotherhood and some of the group’s former officials have been convicted of terrorist ties. (See CAMERA’s Special Report, “The Council of American Islamic Relations, Civil Rights or Extremism.”) Recently, the FBI, which had spent years trying to work with CAIR, has severed ties with the organization.

Tobin and Ybarra assert that “CAIR collaborates with CIE to handle complaints of misrepresentation of Muslims in textbooks.” For instance, Tobin and Ybarra discovered that in 1999:

a publisher decided to halt distribution of a college textbook that was deemed offensive to Islam…after a formal complaint was filed by the Council on American-Islamic Relations.

While the study found that both the CIE and the Saudi-supported CAIR [Trouble with Textbooks, p.31] focus on influencing student material, it also discovered that groups, such as the Middle East Policy Council (MEPC) have “been very active in influencing K–12 education through teacher-training workshops.”

Saudi Arabia, where the extremist Wahabi version of Islam is practiced and where the practice of other religions is banned, also funds MEPC along with Arab World and Islamic Resources (AWAIR) and the Washington, D.C. based Amideast. All distribute their materials through “teacher training workshops across the country.” For instance, the authors relate: “Amideast distributes over 125 books, videos posters, lesson plans and student activities through their online catalogue.”

Tobin and Ybarra emphasize that teachers “rely on supplemental materials because the teachers themselves often do not know enough about a particular subject and must borrow authority from outside the classroom.” Rather than blaming the teachers, the authors point a finger at the “shoddy scholarship” spread by editors and publishers who circulate misleading textbooks and teachers’ supplements containing “inaccurate generalizations, imprecise conclusions, repudiated theories, and, sometimes, rumors that have taken on the weight of truth without grounding in academic enquiry.”

[T]he problems that we have encountered in this analysis are not Jewish community problems. They are American problems, because they speak to the difficulty of representing the full breadth and depth of American multiculturalism in our public schools. At the most basic level, the trouble with tex
tbooks, given the critical role that textbooks play as molders of civic values and conveyors of truth, should be the concern of all citizens if any group— ethnic, racial, religious, or political— is misrepresented in their children’s education.

The researchers state further that if the faulty textbooks remain “unchallenged” they “could create a generation of misinformed or even bigoted American schoolchildren.”

The Trouble with Textbooks is an insightful, groundbreaking investigation that exposes historical, religious and social misrepresentations of propagandistic proportions by the K– 12 school textbook publishing industry in the United States. It is enlightening and vital reading for educators, students and parents alike.
Above all, it should be a spur to all Americans to monitor their community’s textbooks and insist publishers remove errors and bias from every volume.
Donate Now