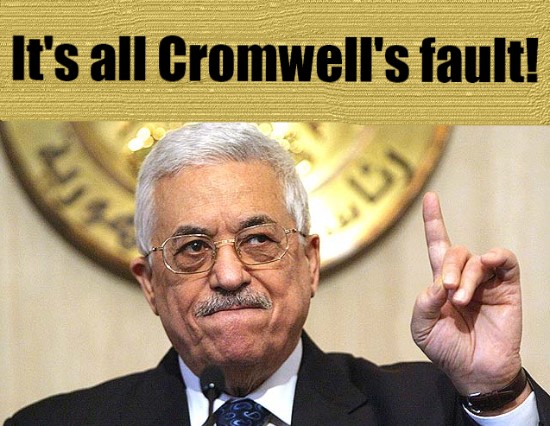 So it is possible. There’s no cosmic force, no unbreachable journalistic rule, preventing mainstream American publications from focusing on Mahmoud Abbas’s indiscretions.

Forthright reporting on Abbas shouldn’t be so hard. But too many in the media have struggled with the task. The ugliest of utterances from his mouth have been concealed by those tasked with reporting on them, those same journalists who otherwise seem to believe the Arab-Israeli conflict is the epicenter of world news. So when Abbas recently said, in reference to Jews, that there is “no one better at falsifying history or religion than them,” citing God himself to substantiate the anti-Semitic libel, the media silence was deafening.

The New York Times covered the Dec. 13, 2017 meeting at which Abbas made the statement, but decided the anti-Semitism by a head of state wasn’t news fit to print.

The Times wasn’t alone. The Washington Post, Associated Press, NPR, Reuters, and BBC, were likewise mum about Abbas’s recitation of anti-Jewish verses from the Koran, which he used to make the point that Jews falsify the scriptures and history.

A month later, the news media powerhouses were given a second chance. On Jan. 14, 2018, Abbas again took the podium, and again spewed vitriol about his Jewish neighbors in Israel. Aside from pronouncing the death of the Oslo peace process between Israel and the Palestinians, he rejected the Jewish connection to Israel — “it has nothing to do with Judaism” — and denied the legitimacy of the Jewish presence in the country, offering wild conspiracy theories to explain to his Palestinian audience why the Jews are there in the first place.

Among the fabrications: Abbas claimed that Oliver Cromwell, a 17th century English leader who was sympathetic to the idea of readmitting Jews to England, in fact hatched a conspiracy to ship European Jews to the Middle East. He maintained that Jews weren’t persecuted in Europe because their religion, but rather due to their “social function.” He insisted early Zionist leader Theodor Herzl coined the slogan “a land without a people for a people without a land” to convey his supposed desire to “erase the Palestinians from Palestine.” He described a “secret meeting” of European leaders in the early 1900s who, fearing the Arab world was poised to inherit European civilization, devised a plan to sow infighting to prevent the dreaded inheritance. The expulsion and flight of Jews from the Arab world, Abbas insisted, was all part of a scheme by Israeli prime minister David Ben Gurion.

The Jews themselves didn’t want anything to do with the land of Israel, Abbas continued. “Even during the Holocaust, they did not emigrate.” (In fact, Arab leaders pressured the British administrators of Palestine to prevent Jewish immigration, and the British largely complied even during and after the Holocaust. American envoy Earl G. Harrison in 1945 reported to President Truman that most Jews in displaced persons camps “want to be evacuated to Palestine now.” The Holy Land is “clearly the choice of most,” and “definitely and pre-eminently the first choice,” he added. That same year, a Red Cross representative concluded that “Ninety-five percent of the Jewish refugees in Europe would like to emigrate to Palestine.”)

Unsurprisingly, none of this was particularly well-received outside of the Arab world. Tzachi Hanegbi, a government minister from Israel’s Likud party, slammed the speech as “laced with vile anti-Semitic conspiracy theories and was unbecoming of a leader.” His political opponent, Israeli opposition leader and Labor party head Avi Gabbay characterized Abbas’s words as “grave lies full of anti-Semitism.”

In the United States, too, the Jewish left and right were largely united. JNS, the Jewish News Syndicate, reported that the dovish Israel Policy Forum labeled Abbas’s two-hour lecture an “unhinged screed” and concluded it is now “impossible to view Abbas as a viable negotiating partner.” Abbas, the Forum added, “continues to deny the right of the Jewish people to their own national movement.”

Eric Yoffie, a left-leaning former head of the Reform movement, called the speech “outrageous, ignorant and insulting to Jews and civilized people everywhere.” Forward editor Jane Eisner wrote that Abbas’s address “cannot be dismissed, ignored or justified.” Americans for Peace Now president Debra DeLee said her organization “condemns the offensive language that Abbas used and particularly the unacceptable conspiracy theories that he repeated.” Even J Street managed to agree that widespread condemnation of the speech is justifiable.

Aaron David Miller, a longtime U.S. peace negotiator, called it an “unhinged speech” that “veered into rank anti-Semitism,” and President Obama’s ambassador to Israel Daniel Shapiro dubbed elements of the speech “outrageous,” “bizarre,” and “shameful,” and concluded that Abbas is “out of the peace talks game.”

And conservative commentator Jonathan Tobin argued that “no rational person could hear Abbas’s January 14 diatribe and still believe he has any interest in two states or coexistence.”

Reading the New York Times account of the speech, though, one would never guess the overwhelmingly negative reaction it prompted. The newspaper noted that Abbas “angrily assailed the Trump administration,” but the speech otherwise came across as somewhat moderate.

The Palestinian leader “stopped well short of embracing an alternative to a two-state solution,” reporter David Halbfinger announced early in the piece, although Abbas had attacked the legitimacy of a Jewish state in the region both by assailing the Balfour Declaration, a British document supporting the establishment of a Jewish national home, and by dubbing Israel a “colonialist enterprise that has nothing to do with Judaism.”

Halbfinger then insisted that Abbas “also shied away from urging the kind of provocative acts, like ending the Palestinian Authority’s security cooperation with Israel or disbanding the authority itself, that could raise the costs of occupation for Israel and shake officials in Jerusalem and Washington.” (The Palestine Liberation Organization’s Central Council, to whom Abbas delivered his speech, seemed to get a different message. The following day, the body, dominated by Abbas loyalists, voted to recommend an end to security cooperation with Israel.)

“Indeed,” the New York Times reporter added, “Mr. Abbas, who reaffirmed his commitment to nonviolence and stopping terrorism, seemed to hold out hope of a return to negotiations.”

Only in the final paragraphs of the article was there any reference to Abbas’s wilder charges — and the most the newspaper would say about those is that they may have bored listeners:

Testing his audience’s attention, Mr. Abbas also gave a lengthy history lecture reaching back to the 17th century, saying that Oliver Cromwell had first proposed shipping European Jews to the Holy Land, before tracing the beginning of Zionism to what he called the 19th-century journalist and activist Theodor Herzl’s efforts to “wipe out Palestinians from Palestine.”

“This is a colonial enterprise that has nothing to do with Jewishness,” Mr. Abbas said. “The Jews were used as a tool under the concept of the promised land — call it whatever you want. Everything has been made up.”

A boring “history lecture”? For a newspaper devoted an entire article to fact-checking the Israeli prime minister when he mistakenly said Iranians were not allowed to wear jeans, and that charged an Israeli minister with “distorting” after he made a (quite reasonable) prediction about the financial benefits to Iran of sanctions relief, the skeptical treatment of Abbas’s outlandish claims theories appears to be tacit acceptance, and wrongly signals to readers that the “history lecture” might actually have been, well, actual history.

CNN’s write-up of Abbas’s meeting, meanwhile, was, even less forthcoming with the ugly details, as CAMERA has recently noted.

Among such company, it was striking when The Atlantic published a story on Jan. 21 that didn’t skirt around the issue. Rather, contributor Grant Rumley was forthright and forceful in describing Abbas’s speech:

Last Sunday, the 82-year-old Abbas, the president of the Palestinian Authority, gave a speech in front of the Palestine Liberation Organization’s Central Council. Over two rambling hours, he deployed anti-Semitic tropes, undercut the Jewish connection to Israel, and blamed everyone from Oliver Cromwell to Napoleon to Winston Churchill for Israel’s creation.

Rumley also recounted about Abbas what too many journalists would prefer we forget:

In recent years, he’s accused Israeli rabbis of supporting the poisoning of Palestinian water wells, claimed Jews had “fabricated” history, and insisted he would “never recognize the Jewishness of the state of Israel.” This dalliance with anti-Semitism brings to mind his controversial PhD thesis, which downplayed the number of victims of the Holocaust and suggested a link between Zionism and Nazism. Though he later backtracked on the claims in his thesis, his recent diatribes call into question his sincerity.

Abbas—the man who became president on the pledge to finally make a deal with the Israelis through public diplomacy and nonviolence—has morphed into Arafat, the very figure he pledged not to become. It’s a remarkable fall from grace for a leader who started with such potential.

It shouldn’t take The Atlantic to lead the way, certainly not this late in the game. News reporters should have understood, from the day President Abbas began his four year term thirteen years ago, that their job is not to protect the Palestinian leader, nor to promote the idea that, through his unvarnished moderation, Abbas is walking evidence of Israeli responsibility for the continuation of the conflict. Coverage of Abbas’s role in fomenting hate has been all too scarce. But if a venerated American magazine can do it, there may be hope for the rest.
This piece was updated on Jan. 30 with comments from Aaron David Miller.