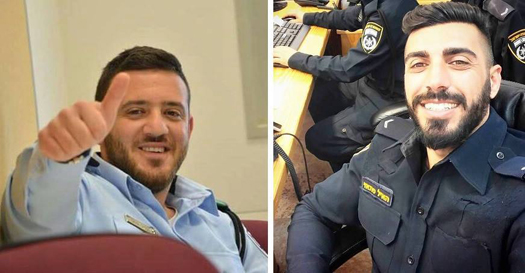 Israeli policemen (from left) Kaamil Shanan and Hail Stawi,
shot to death July 14 by Israeli Arab assailants
CAMERA Arabic, a new CAMERA initiative, has prompted correction of a Feb. 24 Reuters Arabic article (“Why are there disturbances in response to the U.S. Embassy Move to Jerusalem?”) which had erroneously reported that in the fatal July 14, 2017 Temple Mount shooting attack, two Israeli soldiers were killed. CAMERA Arabic sent Reuters Arabic editors Reuters’ own news report at the time of the attack, in which the wire service correctly noted that the victims were two Israeli policemen, not soldiers. A screen shot of the corrected text, referring to the two policemen, follows.

Meanwhile, Reuters had yet to clarify that the shooting took place after the three Israeli Arab assailants hid their weapon in the Temple Mount compound, as Reuters reported at the time.
Visit CAMERA Arabic for the Arabic version of this post.
Donate Now