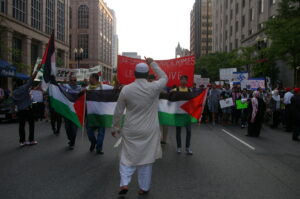 Antisemitism was a central message at an Al Quds Day Rally that took place in in Boston in July, 2014. (Photo: Dexter Van Zile.)

The following Op-Ed was published in The Algemeiner on September 13, 2021.

August 18, 2021, was a risky day for Jews to be out and about in London. Five Jews were attacked on the street. The Evening Standard provided details about three of the assaults. At 6:40 p.m., a 30-year-old man was hit on the head with a bottle. A half hour later, a 14-year-old boy was attacked (no details provided), and at 8:30 p.m., “a 64-year-old man was hit in the face and pushed to the floor, breaking a bone in his foot, detectives said,” the Evening Standard reported. The paper added that the police were “informed of a fourth and fifth victim who have yet to contact police and urged any other victims to come forward.” (These victims have since come forward.)

People have been punching Jews (and worse) for a long time. What made these attacks remarkable is that the perpetrator was caught on video. The images showed a man dressed in Islamic garb either perpetrating the attacks or walking away from his victims with an angry, purposeful, and embittered look on his face. He looked committed to his hatred.

In response to the attacks, Zara Mohammed, Secretary General of the Muslim Council of Britain (MCB), posted a tweet that declared, “This is shocking and completely unacceptable, I hope the perpetrators will be brought to justice and the victims swift healing. We cannot tolerate any such hatred in our society.”

Mohammed’s statement, which was not posted on the organization’s website, was a good thing —  but it would be nice if the MCB was more explicit in its condemnation of the antisemitic nature of the August 18 attacks. The MCB has regularly expressed solidarity with Jews in the aftermath of numerous anti-Jewish attacks, but hasn’t been so vocal in its condemnation of antisemitism in the Muslim community it represents.

This is a problem. The Anti-Defamation League reported that extremely antisemitic beliefs were held by 54 percent of UK Muslims surveyed in 2019, as compared to 22 percent of the Christians and 24 percent of the entire population in the United Kingdom.

As much as people don’t want to address it with the force necessary to fix the problem, hostility toward Jews has been a central element of the Islamic tradition for centuries, just as it has been for Christianity.

No, not every Muslim hates Jews, nor does every Christian hate Jews.

But anti-Jewish polemics are present in both the Koran and the Bible, and some adherents of both faiths invoke these polemics to justify acts of hatred and violence toward Jews. In doing so, they undermine the ability of people from different backgrounds to live in close quarters in peace and safety. Invoking their scripture, Christian and Muslim antisemites have targeted Jews for destruction, and declared that God is on their side in this mission.

In the Christian Bible, Saint Paul declares in his first letter to the Thessalonians that God is angry at the Jews for having killed Jesus, and that the Jews are hostile to the rest of humanity. Professional antisemite E. Michael Jones regularly invokes this passage to justify his contempt for Jews in the modern world. Such anti-Judaism paved the way for the Holocaust.

Similarly, the Koran says a number of particularly nasty things about Jews, declaring them guilty of murdering prophets, with Sura 4:157 declaring that Jews falsely boasted of having killed Jesus. Sura 4:46 declares that God has cursed Jews for their unbelief.

These and many other polemics are regularly promoted by Islamists and jihadists to justify their hostility toward Jews, with baleful results in the Middle East and in the rest of the world.

In his book, “The Legacy of Islamic Antisemitism: From Sacred Texts to Solemn History” (2020), researcher Andrew Bostom reveals that in 2011, Gunther Jikeli reported the results of his interviews with 117 young Muslim men in Berlin, Paris, and London — and found that “the majority [of them] voice some or strong antisemitic feelings. They openly express their negative viewpoints toward Jews. This is often done with aggression and sometimes includes intentions to carry out antisemitic attacks.”

Jikeli also reports that his interviewees looked “for justification of antisemitic views within what they perceive as Islam or part of their religious or ethnic identity and they often find confirmation in Islamic sources and social circles, which serve as strong, authoritative references.”

In his assessment of Jikeli’s findings, Bostom takes the scholar to task for his “excruciating reluctance to come to terms with his own findings, harping on supposed ‘perceptions of Islam’ by the interviewees, as opposed to voluminous Jew-hatred within Islam’s canon.” “Nevertheless,” Bostom reports, “Jikeli provided these critical, if understated observations, which, despite his obvious reticence, affirm the centrality of Islam in shaping the Antisemitic views of young Muslim adults in Western Europe.”

Fortunately, numerous Muslim scholars have addressed the problem of antisemitism on the part of their fellow Muslims. For example, Maajid Nawaz, a former Islamist himself, has regularly condemned antisemitism expressed by jihadists. So has Tarek Fatah and many other Muslim scholars. But just like their counterparts in Christianity dealing with the issue of antisemitism, they have a lot of work to do.

Addressing the horror of attacks like those perpetrated in London on August 18 — and their roots in the Islamic tradition — is not an act of bigotry. Quite the opposite. These attacks are anathema to any religion of peace, and give bigots license to falsely stereotype all Arabs and Muslims as anti-Jewish thugs.

But as a growing number of Muslim-majority countries are starting to come to terms with Israel’s existence in the Middle East under the rubric of the Abraham Accords, it is time for people of good faith to come to grips with the roots of Muslim hostility towards Jews, so that in the future, we will have fewer days like August 18, 2021.