CBC Ombudsperson Jack Nagler has responded to  CAMERA's complaint concerning the irrelevant discussion of ISIS recruits from Canada in the midst of an article about Jewish Canadians joining the IDF. While maintaining that "[t]his section of the story does not violate CBC journalistic policies," he concluded that the piece lacked focus, required deeper context, greater nuance and a more in-depth understanding of history and "sensitivities at play" ("Inferences and Israel," May 14).

March 3, 2019 – CAMERA last week prompted correction of a CBC (Canadian Broadcasting Corporation) report which erroneously counted gunmen, infiltrators and Palestinians who engaged in other violent attacks at the Gaza border with Israel among demonstrators killed by Israeli fire. While the CBC commendably set the record straight on this point, it declined to remove the completely irrelevant discussion of Canadians joining ISIS from the article about Canadians joining the Israeli army, the friendly military of a Canadian ally.

In her Feb. 22 article ("I don't see why I shouldn't have to serve': Why young, Jewish Canadians are enlisting in the Israeli military"), Elise von Scheel erred on U.N. statistics, stating:

The United Nations estimates more than 200 Palestinians were killed and thousands more injured during demonstrations that lasted for most of the year and continue still.

The article provides a hyperlink to the U.N. source in question. The source does not substantiate the claim that 200 Palestinians were killed "during demonstrations." The U.N. document ("More casualties sustained during the 'Great March of Return'") details Palestinian casualties from March 30 through Oct. 31, 2018  as part of the totality of the "March of Return" events – which include violent attacks and infiltrations, alongside demonstrations.
The U.N. states:

Since the start of the ‘Great March of Return’ demonstrations on 30 March 2018 and up to the end of October, 171 Palestinians have been killed, including 33 children, during the demonstrations. A further 57 people, including 10 children, were killed in other contexts, including Palestinian attacks, Israeli airstrikes and infiltration attempts into Israel, according to information collected by OCHA.

Thus, according to the U.N., 171 were killed in the demonstrations through October, while an additional 57 were killed in Palestinian attacks on Israel, Israeli airstrikes on militants, and infiltration attempts into Israel. Please note that other media outlets have previously corrected erroneous data which conflated Palestinian attackers with Palestinian demonstrators. For instance, The Los Angeles Times published the following correction on June 21, 2018:

Gaza kites: In the June 19 Section A, an article about the use of kites as weapons in the Gaza Strip said the Israeli military has killed about 130 protesters in Gaza. Those killed include armed militants, as well as one press photographer and one medic.

New York Magazine also corrected after a report lumped in Hamas fighters who attacked Israeli forces with grenades and pipe bombs and engaged in a shootout and militants who planted an explosive device together with protesters. 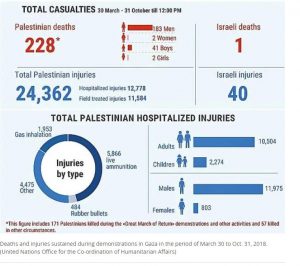 Unfortunately, CBC missed an opportunity to convey the violent nature of the "March of Return" events, and the fact that, according to the U.N., at least 25 percent of those killed were engaged in violent attacks, by publishing a chart (at left) of the casualties which omitted key information.
The note at the bottom of the graphic had originally stated: "This figure includes 171 Palestinians killed during the 'Great March of Return' demonstrations and other activities and 57 killed in other circumstances." Yet, it omitted the key information that the U.N. did provide: the "other activities" include Palestinian attacks, Israeli airstrikes (on militants) and infiltrations.
In response to CAMERA's communication with editors, CBC commendably amended the text to state:

The United Nations estimates 171 Palestinians were killed and thousands more injured during demonstrations that lasted for most of the year, and another 57 were killed in "other contexts," including "Palestinian attacks, Israeli airstrikes and infiltration attempts into Israel."

In addition, the text under the graphic was amended to reflect that not all killed were demonstrators. It now states:

Deaths and injuries sustained during demonstrations and other confrontations in Gaza in the period of March 30 to Oct. 31, 2018. (Emphasis added.)

Finally, editors commendably appended the following correction to alert readers to the change:

While CAMERA applauds the thorough correction regarding the U.N.'s figures for Palestinian casualties at the border, it continues to call on the CBC to remove irrelevant references to Canadians joining ISIS, which confuse and mislead news consumers, as opposed to informing them about Canadians recruits to the Israeli military. The article on Canadian "lone soldiers" who joined Israeli's army reports:

The issue of keeping tabs on Canadians who choose to fight overseas was the subject of heated debate in the House of Commons last spring, as opposition MPs pushed back against Public Safety Canada's pitch to reintegrate returning members of ISIS.

The debate resurfaced recently around the question of what to do with Canadians being held by the U.S.-backed Syrian Democratic Forces as the U.S. withdraws from Syria.

But that debate concerned radicalized Canadians fighting for a terrorist group, not Canadian citizens serving in the military of a long-standing ally.

Experts caution against drawing a comparison between Canadians serving in the IDF and those who leave to join extremist groups.

"Israel, however controversial it might be, is considered to be an ally of the Western world," said Derek Penslar, a professor of Jewish history at Harvard University in Cambridge, Mass.

Indeed, the experts are right. For that reason, coverage of Canadians joining up with ISIS has no place in a CBC feature about citizens joining the Israeli army. CAMERA continues to call on the CBC to remove the passage about ISIS recruits.