Mennonite peace activists from North America have been a central component in the ongoing effort to delegitimize the Jewish state and portray antisemites in the Middle East as legitimate partners for interreligious dialogue and peace negotiations. In 2008, for example, the Mennonite Central Committee declared that Iranian President Mahmoud Ahmadinejad had moderated his statements regarding Israel,  when in fact he had continued to say hateful things about the Jewish state, stating for example that “Zionists are the true manifestation of Satan.”

Van Zile wrote extensively about the anti-Israel bias exhibited by Mennonite peace activists in an article published by the Jerusalem Center for Public Affairs titled “Key Mennonite Institutions Against Israel,” which can be read here.

One of the main themes of Van Zile’s writing about Mennonite peace activists is the manner in which they use Mennonite pacifism to critique the behavior of Israelis Jews, but not Arabs and Muslims who seek Israel’s destruction. Similar behavior can be seen from other Christian “peacemaking” activists who regularly vilify Israel while remaining silent about the misdeeds of its adversaries.

The underlying message of Van Zile’s writing is that a lot of so-called peace activists in the U.S. enjoy great moral luck. They live in a country where the violence used to establish the republic is a distant memory and therefore they can view themselves as innocent and good and look down on Israeli Jews as bad. Moral luck is not virtue.

Van Zile raises the prospect that Mennonite anti-Zionism is an attempt to obscure the illogic of pacifism. For Mennonite peace activists to acknowledge that Jews and Israelis are facing destruction if they reject the use of force is to admit that their pacifism is based on the false premise that genocidal movements and governments can be defeated with non-violence.

Rather than confront their own privilege and acknowledge that their experience of safety in North America leaves them ill-equipped to address the threats faced by Israeli Jews, they distort the source of the evidence that this is so — Jewish and Israeli history.

Let’s face it. Asking Israeli Jews to sacrifice their safety and well being in the pursuit of a utopian agenda is a spiritualized form of antisemitism, one that is regularly practiced by Mennonite peace activists and sadly enough, lots of other Christians. Very rarely, if ever, do Mennonites and other Christians demand that Muslims and Arabs embrace notions of forgiveness and pacifism that they expect Israel and its Jewish leaders and citizens to adopt.

(Readers who look at the comments section under the TOI article can see for themselves that it provoked a number of angry ad hominem responses from an Episcopal pastor from the Midwest who seemed unable to address the substantive issues in Van Zile’s article.) 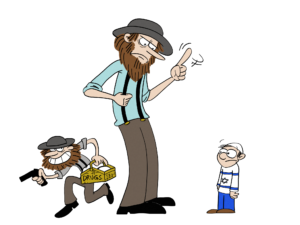 Mennonite peace and justice activists in the United States and Canada have been quiet about the role their coreligionists in Mexico have played in the drug trade in North America even as they have worked to vilify Israel. They have also failed to take into account how the privilege they enjoy as Christians in North America has blinded them to the realities faced by Israeli Jews in the Middle East.

Van Zile’s second article, titled “Mennonites Need to Keep Their Side of the Street Clean,” covers new ground, highlighting the vocal manner in which the Mennonite Church USA and the Mennonite Church Canada condemn Israel while remaining silent about Mennonite drug traffickers who have been smuggling marijuana, cocaine and crystal meth from a village into Mexico into Canada. The problem has been publicized since the early 1990s in at least two segments broadcast by The Fifth Estate, a Canadian news show broadcast on CBC News. A portion of the articles reads as follows:

When the Fifth Estate first covered the story in 1992, one law enforcement official declared that the Mennonites involved in the drug trade had been doing it for at least 10 years, maybe longer. Another law enforcement official stated in 1992 that 20 percent of the drugs that crossed the US-Canada Border into Windsor, Ontario were smuggled by Mennonites, with five Mennonite drug cells operating in Ontario. The leader of the business used his status as a dual citizen of both Canada and Mexico to avoid prosecution in Canada. It was a nasty business that resulted in the transformation of Grassy Lake, Alberta into a distribution hub for marijuana and cocaine. At least one informant was murdered by Mexican Mennonites to protect the business. The Fifth Estate revisited the story in 2017, and the whole scandal has become fodder for the TV series Pure, which aired in Canada in 2017.

How have Mennonite intellectuals responded to the attention? You have one guess, and of course, they responded with indignation, not self-criticism. (But you knew that. Criticism? That’s reserved for Israel!) Articles in the Canadian Mennonite condemned the production of the series, and said that the Mennonite colonists living in Mexico were “a misunderstood people” who have had trouble making ends meet, and as a result are “subject to the social pathologies that have afflicted other communities.”

It just goes to show that people are much tougher when judging others than they are their own communities. [Links added.]

Maybe it’s about time that leaders in the Mennonite Church USA, Mennonite Church Canada, and the Mennonite Central Committee deal with the beam in their own eye before they condemn the mote in the eyes of Israeli Jews who live in much more difficult circumstances than they do. It’s an issue that lots of so-called peace activists in other Christian churches should address as well.