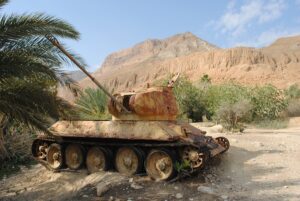 A war memorial at Ein Gedi demonstrates the limits of virtue-signaling and the value of resilience. (Photo: Dexter Van Zile)

CAMERA researcher Dexter Van Zile appeared on “Beyond the Matrix” on Israel News Talk Radio last week. The show is hosted by Rod Reuven Dovid Bryant and Jerry Gordon. The subject of the interview was “Jewish Resilience, the Plague and Antisemitism.”

During his hour-long appearance, Van Zile explained that Israeli and Jewish history disconfirm the utopian impulse that drives many progressives to attack Israel.

“At a certain point, there’s a limit to how far you can go with virtue-signaling,” he said.

He also declared, BDS is part of a psychological campaign to drive young Jews from the public square, distance themselves from the modern state of Israel and from their fellow Jews.

The interview can be accessed here.