It’s a strange and troubling thing to see young idealistic Catholics inviting a Jew-baiter to speak about how the Christian faith can be brought to bear on the problems facing the American people, but that is what is happening. Nearly every day this Jew-baiter, E. Michael Jones, appears on yet another YouTube channel where he is interviewed by young Catholics in their 20s or 30s who give him respectful if not fawning treatment.

The Catholics who invite Jones to speak on their YouTube shows seem completely oblivious to his efforts to forge alliances with white racists and affirm their tendency to blame sneaky and invisible Jews for the problems they face.

His message is that white racists who are intent on maintaining the ethnic purity of their communities need to enlist the help of God — through the Catholic church — in their efforts. In sum, he is using his distorted view of Catholic teachings to further the balkanization of American society.

He did this in a 2009 interview with a white racist from Mississippi by the name of Jim Giles. During this interview E. Michael Jones described Jews in a particularly hateful manner and legitimized violence against Martin Luther King, Jr., stating explicitly that Lithuanians who threw rocks at the man were correct to do so. (I know this sounds preposterous, but it’s all right here in this interview.)

During the interview, Dr. Jones argued that Catholic Bishops cooperated with the efforts of urban planners to ethnically cleanse ethnic Catholics from their homes in large cities. “They [the bishops] were saying basically, ‘You Catholics should just roll over and let these black invaders from Mississippi take over your neighborhood.” 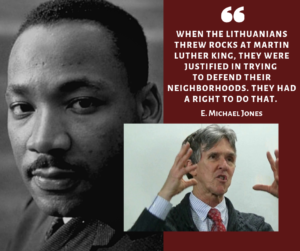 Then he goes onto say in the face of this campaign of ethnic cleansing and abandonment by the Bishops, Catholics living in these cities had a right to defend their communities.

The rock throwing that Jones was referring to took place in Chicago in 1966 and is described in detail here.

The upshot is this: For years, E. Michael Jones, the man who kept repeating that no one had the right to harm the Jew (no matter how badly they deserved it) also said it was OK to throw rocks at Martin Luther King, Jr., the non-violent civil rights activist.

In the same interview, Dr. Jones also declared that, “Jewish identity is negative. It’s theological and it’s based on rejection of Christ and logos and that’s the way it has to be dealt with.”

Also, during that interview, Jim Giles declared that a neo-Nazi by the name of Alex Linder “has written that the Jewish people have pretty much turned the black race loose on white people.”

“He probably got it from me!” Jones said in response adding later that Linder regularly promotes his (Jones’s) articles on his website.

In a more recent interview, on a YouTube channel titled “Aryan Insights,” Jones warned the interviewer “If you’re thinking in categories of white guys, the Jew is invisible and that’s the problem. You can’t tell who the source of the problem is.”

Prior to YouTube, Dr. Jones would have struggled to get his message out and it would have been better to ignore him.

Sadly, it appears those days are over. E. Michael Jones has become our era’s Father Coughlin, but instead of discovering the power of radio, he has discovered the power of YouTube.

Catholics who interview E. Michael Jones on their YouTube channels are helping to mainstream a Jew-baiter and racist who promotes ethnic strife in American society.

They should be ashamed of themselves.