Arabs and Israelis met together publicly in the Gulf for the first time, and it certainly looks very positive: Israeli businessmen chatting up Emirati and Saudi investors; Israel and American delegates praying in a historic synagogue in Manam. The following week, Israeli Foreign Minister Israel Katz visited Abu Dhabi, the first publicized visit by an Israeli minister to the United Arab Emirates. . . (Emphasis added.)

The reporter’s error is two-fold. First, the June conference in Bahrain was not the first time Arabs and Israelis met together publicly in the Gulf. Following Prime Minister Benjamin Netanyahu’s surprise visit to Oman last October, which was announced once he returned to Israel, Minister Katz publicly visited that Gulf state. As Ynet reported at the time (“Minister Katz dances traditional sword dance in Oman,” Nov. 7, 2018):

Transportation and Intelligence Minister Yisrael Katz received Tuesday a very warm welcome upon his arrival in Oman, and joined his hosts in a traditional sword dance to the sounds of local folk music

The minister tweeted Nov. 6 (CAMERA’s translation of the above tweet):

This is how I was received as an Israeli minister with a warm and public welcome at a “sword dance” in Oman, an end of days vision and an expression of Israel’s strengthened positioning in the region. Tomorrow I will present my “tracks for peace” [plan] to the ministers of the region. 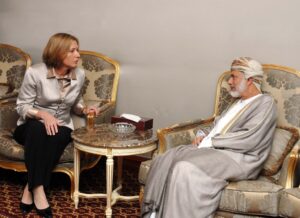 Prior to 2019, then-Israeli Foreign Minister Tzipi Livni met in Doha with Omani and other Gulf leaders in a 2008 visit that was made public at the time. Even earlier, in 1994, then Prime Minister Yitzhak Rabin flew secretly to Oman, but returned publicly.

Two years later, then-acting Prime Minister Shimon Peres also made public trips to the region. The Times of Israel reported that in April 1996:

At the airport in Doha, the Israeli prime minister reviewed an honor guard before heading to the Royal Palace for a meeting with Qatari Emir Hamad bin Khalifa Al Thani (who ruled until last month, when he abdicated the throne in favor of his son). 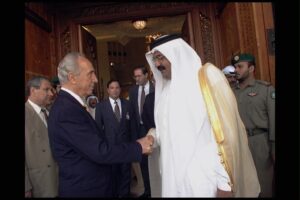 Israeli judoka Sagi Muki was in the process of winning a gold medal at an international judo competition in Abu Dhabi. Muki stood on the victor’s pedestal as Israel’s national anthem, “Hatikva,” played, while the Israeli Culture and Sports Minister Miri Regev proudly looked on.

“We made history,” Regev tweeted afterward.

We urge the CSM to correct this point in print and online.