CAMERA has prompted correction of a Nov. 14 CBSN report which falsely stated that last week Palestinians had fired “hundreds of rockets at Israel’s military.” In fact, as CAMERA first reported last week, the report by CBS News’ 24/7 digital streaming service was false as Palestinians fired several hundreds rockets at scores of Israeli communities – not Israel’s military – targeting civilians across the country’s south. 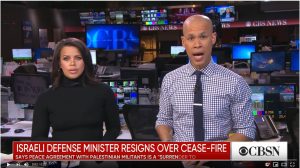 As CAMERA previously noted, a Cornet anti-tank missile which hit a bus that just unloaded soldiers was an exception to the Palestinian barrage, in which civilians were the targets. Particularly hard hit was the southern city of Ashkelon, where homes were destroyed and one civilian was killed, but smaller communities along the border also were not spared, and were likewise targeted, forcing their residents to flee for protected spaces. They include villages like Ofakim, Maslul, Peduim, Rennen, Ohad, Tzohar, Sde Nitzan, Talmei Eliyahu, Eshbol, Zru’ah, Mabu’im, Nir Moshe, Nir Akiva, Kelachim, Shevi Darom, Givolim, Sderot, Nachal Oz, Omer, Lakia, and many more.

In our report on Nov. 14 we said that Palestinians had fired hundreds of rockets at Israel’s military. In fact, the rockets were fired into Israel including several cities and civilian targets.

CBSN has removed the erroneous report from its web site, but it still appears on YouTube.