Mahmoud Abbas congratulates A’hd (right) and her cousin Marah for their “bravery” (From the Nabi Sabeh Solidarity blog, first posted by Snapshots on Sept. 11, 2012)

It was just a question of time. Two months ago, CAMERA described in a Times of Israel Op-Ed (“Cheap Shots: Palestinians Put Kids in the Line of Fire“) how A’hd Tamimi, 11, and her cousin Marah took a lead role in the Nabi Saleh demonstration against the Israeli army. The weekly clashes often result in violence. Photographs of the girls being restrained by Israeli soldiers (see below, for example), subsequently were featured in Australian newspapers illustrating alleged Israeli abuse of Palestinian children. 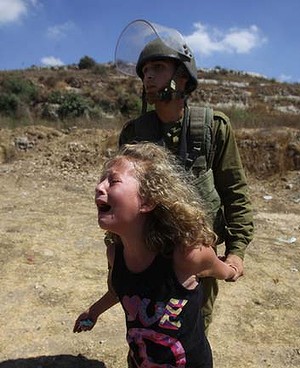 This Aug. 24 AFP photograph of an Israeli soldiers restraining A’hd Tamimi, 11, was featured in Australian papers, and was all over Facebook

We noted in the Times Op-Ed:

A’hd is the daughter of Narimen and Bassem, prominent activists in the Popular Resistance, and Marah’s father is Naji, another leader in the weekly demonstrations. In other words, the girls’ parents are among those who determine the protests’ strategies. Rather than keeping their children at a safe distance from the often-violent clashes, the parents encouraged their children to play highly visible roles in the confrontation with the army. . . Though photographs of the crying and constrained A’hd and Marah are actually products of Palestinian manipulation and exploitation of children, the Australian media outlets publish them unquestioningly as ostensible evidence of Israeli abuse of Palestinian children. In other words, the Tamimi girls pulled off a photographic coup, as their parents had hoped. For this, they were rewarded with a meeting with Laila Ghannam, the Palestinian Authority’s Governor of Ramallah, and President Mahmoud Abbas, who congratulated them for their “bravery.”

Encouraged by their parents as well as their national leader, the Tamimi girls are back again in front of the cameras. But this time A’hd ups the ante, kicking and hitting soldiers, as photographers crowd around to shoot dramatic images of a young girl wearing her iconic “love” t-shirt (again) confronting armed soldiers: 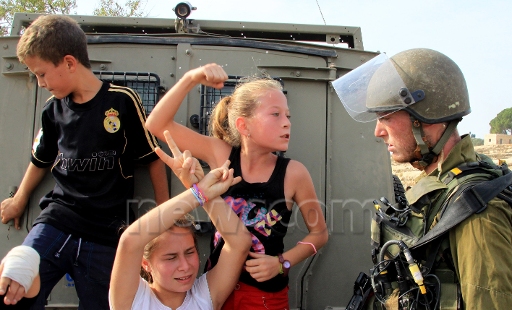 Palestinian protester during a protest against the expanding of Jewish settlements in Nabi Saleh village, near Ramallah on Nov. 2, 2012, the anniversary of the Balfour declaration. The Balfour Declaration was made on November 2, 1917, when then British Foreign Secretary James Balfour officially promised the leader of a Jewish community in a written letter to give the Jewish people all over the world a national homeland. (Photo by Qais Abu Samra/AA/ABACAPRESS.COM)

A senior IDF source told Ynet that intelligence indicates that pro-Palestinian activists pay Palestinian children from Nabi Salih and the nearby villages to confront the soldiers. The weekly protests in the areas used to involve hundreds of people, but over time the numbers have dwindled to just a few dozens. According to the officers, the majority of protesters are foreign pro-Palestinian activists. “The soldiers are briefed on the fact that these protests are staged for the sake of provocation, so that they could be filmed acting violently and so that those videos could be distributed worldwide in an effort to harm the IDF’s image,” the officer explained.