One underlying message that modern mass media offers about Israel is that Jewish power and sovereignty in the land of Israel is a threat or obstacle to the welfare of people living in the Middle East. This dishonest narrative, which fits the agenda of authoritarian regimes and de-stabilizing political movements that use anti-Zionism as a unifying political agenda, infects much, if not most of the media coverage of the Jewish state. This “blame-Israel” narrative is so ubiquitous that it comes as a shock when a news outlet gets it right and portrays Israel as a force for good in the Middle East. But it does happen. 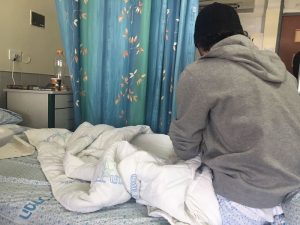 A Syrian injured during his country’s civil war receives medical treatment from an Israeli hospital as part of “Operation Good Neighbor.” (IDF Photo)

The article, titled “Syrian war comes to Israel’s doorstep, brings swirl of changing attitudes,” was written by Dina Kraft. In the article, Kraft recounts how 10,000 people fleeing from Syrian Civil War have come to rely on Israel for their welfare and safety. They have gathered near Syria’s border with Israel because of the protection the Jewish state affords them under “Operation Good Neighbor.” The program provides food, fuel, medical supplies and in some instances medical treatment to people living in villages near Israel. As a result of the program, “[s]ome 5,000 Syrians have been treated in Israeli hospitals,” Kraft reported.

These acts of kindness have changed how many Syrians view the Jewish state, the article indicates.

Five years ago the first wounded Syrians to wake up in Israeli hospitals were shocked and horrified, doctors recall, having grown up on stories of Israel as a cruel enemy. But later they returned home, in some cases after complicated reconstructive surgeries, and told friends and neighbors of the excellent treatment they’d received in Israel, Syrian patients at the hospital say.

Some day, just maybe, people in the news business will start to realize that they have an obligation to portray Israel as it really is, a civilized country that seeks to be a blessing to its neighbors, even when those neighbors are inculcated with Jew-hatred by leaders who oppress them.