At least three CNN items in recent days erroneously reported that the Geneva Convention obligates Israel to vaccinate Palestinians living in the West Bank and the Gaza Strip. The June 18 CNN wire article by Andrew Carey (“Israel to transfer at least 1 million Covid-19 vaccines to Palestinians in swap deal“) and the June 19 article (“Palestinians cancel Pfizer vaccine agreement with Israel“) by Carey and Abeer Salman erred, stating that Israel was

criticized for failing to provide vaccines to cover Palestinians living in West Bank and Gaza, which Israel is obligated to do under the Geneva Convention.
Israel argued that it was relieved of those obligations by the Oslo Accords, signed by Israeli and Palestinian leaders in the 1990s, which allocate responsibility for medical care provision to the Palestinian Authority. (Emphasis added.) 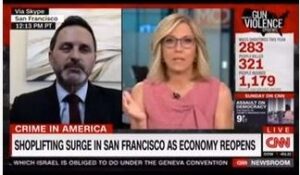 A bottom-scrolling news crawler on June 18 at 3:12:44 pm ET was even more problematic as it stated only the first paragraph (word for word identical to the wire story), leaving out the additional information about the Oslo Accords.
In fact, the Geneva Convention does not obligate Israel to vaccinate Palestinians living in the West Bank and Gaza Strip. As CAMERA’s Ricki Hollander explained:

Beyond the question of whether the Geneva Convention is even applicable to the West Bank, against which there are strong arguments, the claim that it would oblige Israel to vaccinate the Palestinian population under the governance of the Palestinian Authority (PA) is false. The Convention’s relevant Article 56 regarding public health refers specifically to maintaining health “with the cooperation of national and local authorities.” This, the International Committee of the Red Cross explains, means not only that the “Occupying Power” is not expected to shoulder the entire burden of epidemic control measures, but that there’s no requirement for it to intervene at all where national authorities can look after the health of the population. The only requirement is to “avoid hampering the work of the organizations responsible for the task.”

Therefore, it’s not the Oslo Accords “relieved” Israel of an obligation supposedly imposed by the Geneva Convention; rather, the Geneva Convention themselves obligate occupying powers to maintain health “with the cooperation of national and local authorities,” which is exactly what Israel has done.
Moreover, as CAMERA’s Alex Safian detailed, Article 56 of the Geneva Convention, which is the article that critics cite when they argue that the accords require Israel to vaccinate Palestinians living in the West Bank and Gaza Strip, ceases to apply one year after the end of military hostilities (which in this case, took place in 1967). He explained that Article 6 of the convention states:

The present Convention shall apply from the outset of any conflict or occupation mentioned in Article 2 … In the case of occupied territory, the application of the present Convention shall cease one year after the general close of military operations; however, the Occupying Power shall be bound, for the duration of the occupation, to the extent that such Power exercises the functions of government in such territory, by the provisions of the following Articles of the present Convention: 1 to 12, 27, 29 to 34, 47, 49, 51, 52, 53, 59, 61 to 77, 143. (emphasis added)

Notice that contrary to what Amnesty International would have people believe, Article 56 is not among those articles that continue to “apply one year after the general close of military operations.”

In fact, of the articles that do continue to apply, Article 59 is the only one relevant to the question of epidemics and vaccines:

Art. 59. If the whole or part of the population of an occupied territory is inadequately supplied, the Occupying Power shall agree to relief schemes on behalf of the said population, and shall facilitate them by all the means at its disposal.

Such schemes, which may be undertaken either by States or by impartial humanitarian organizations such as the International Committee of the Red Cross, shall consist, in particular, of the provision of consignments of foodstuffs, medical supplies and clothing.

Israel’s obligation under the Fourth Geneva Convention is to “agree to relief schemes” to get, in this case, vaccine supplies to the Palestinian authorities from other parties such as the International Committee of the Red Cross, and to allow for the safe transport to the Palestinian Authority of vaccines that the PA has independently acquired.

Separately, while Carey and Salman reported the claim of the Palestinian health official that Israel failed to disclose a June expiration date for vaccines, they omitted the response from the Israel authorities. Thus, they wrote:

According to Reuters, Alkaila said Israel had told the PA the vaccines expired in July or August, but it turned out the true date was June.

Reuters had also reported the following, which did not appear in the CNN story (“Israel says COVID-19 vaccines rejected by Palestinians were safe“):

The “vaccine delivery transferred to the Palestinian Authority yesterday was perfectly in order,” the Israeli health ministry said in a statement. The dates were known and agreed to by both parties, it said. “The vaccines delivered to the Palestinians are identical in every way to the vaccines currently being administered to Israel’s citizens.”

Given that CNN reported the Palestinian accusation about the expiration date, CAMERA urged CNN to update the article with the Israeli response. In addition, CAMERA has requested correction of the misreporting on the Geneva Convention. Stay tuned for any updates.
Donate Now