The latest smear against Israel in the British media involves a distortion used repeatedly by mainstream media outlets, NGOs and pro-Palestinian propagandists: the charge that Israel cruelly uses water as a weapon against innocent Palestinian civilians, cruelly denying the population an adequate supply.

However, even by the levels of inaccuracy we’re accustomed to, the following headline and photo at The Independent represents an especially egregious example of agitprop being sold as ‘real news’: 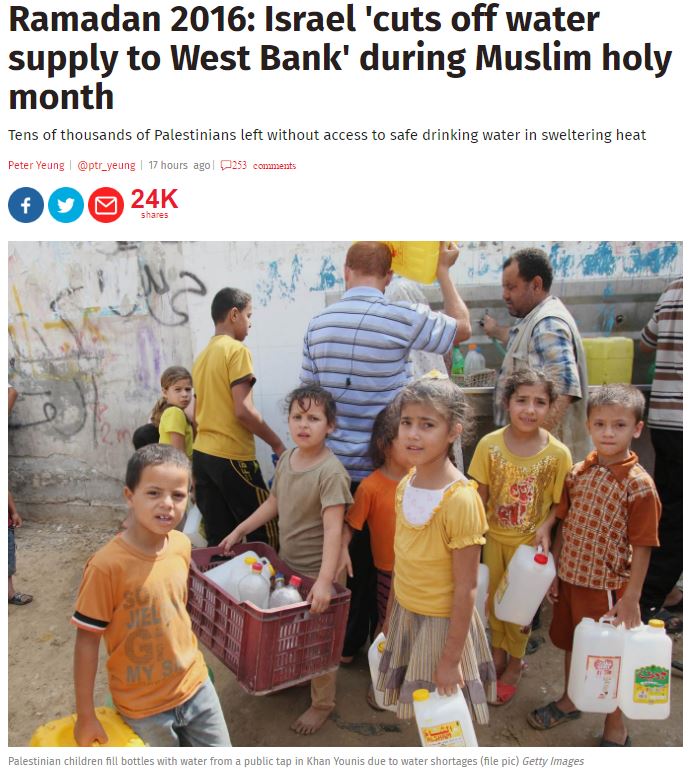 Though there is much in the article (by Peter Yeung) that’s misleading or inaccurate, we’ll focus on the most sensational charges.

Israel has cut off the water supply to large areas of the West Bank, Palestinian authorities have claimed.

Though an updated Indy version of the story noted COGAT’s response regarding a temporary shortage (a couple of hours) due to a burst pipe line, COGAT has informed us (in a series of emails) that the Indy did not publish the most relevant information. COGAT explained that, due to increased usage during the summer months, Mekorot (Israel’s water carrier) was forced to reduce the overall supply to ALL areas of the West Bank – including in Jewish communities.

We sent an email to Mekorot, who then confirmed to us the increased demand during the summer months has resulted in shortages in the West Bank “to Israeli settlements and Palestinian areas“.   A resident in an Israeli community in Samaria who we spoke to confirmed that the shortages have indeed affected Jewish communities.
Now, here’s the charge in the article which was the basis of the headline:

Tens of thousands of Palestinians have reportedly been left wi
thout access to safe drinking water during the Islamic holy month of Ramadan, a period of fasting, at a time when temperatures can exceed 35C.

This is, at best, extraordinarily misleading.

We’ve been in touch with COGAT (the Israeli authority in the territories), who told us that, in order to accommodate Palestinians during Ramadan, when Muslims can’t drink water during the day, “the water supply has been increased during night-time in order to meet the needs of the residents”.

Additionally, COGAT noted that, beginning at the start of Ramadan, on June 6-7,  “the water supply to Hebron and Bethlehem [was] expanded [by] 5,000 cubic meters per day in order to meet the needs of the residents“.

So, to clarify, in summer months, the consumption of water naturally increases.

The water carrier can’t keep up with consumption, so residents (both Muslims AND Jews) experience a shortage.  Quite simply, the demand exceeds supply.

However, to make up for this shortage and, most importantly, to address the changing water needs of Palestinian Muslims during the holiday of Ramadan, Israel INCREASED the amount of available water to the Hebron and Bethlehem communities, and INCREASED the amount of available water during the night, the time when religious Muslims will need it the most.

So, the Indy’s charge that Israel malevolently “cut off water” to Palestinian Muslims during the month of Ramadan is pretty much the opposite of the truth.

Here’s an alternative Indy headline, one which would more accurately reflect the facts. 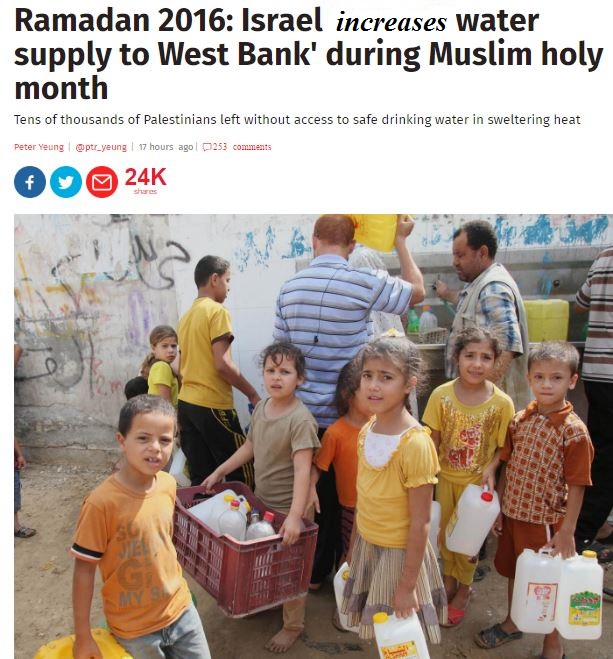 UPDATE:Mekorot just replied to a specific follow-up question we asked  late in the morning. As you can see, though it adds more details about the cause of the shortages, it’s fully consistent with the information we received from COGAT.  The issue (affecting both Jews and Palestinians in the West Bank) is one of supply and demand, not an arbitrary decision by Israel to reduce the amount of water for Palestinians on Ramadan.

Water consumption in the area has greatly increased during this period of the year and the water sources have decreased this year compared to last year due to the declining water level in the mountain aquifer, and therefore we have been compelled to reduce the water supply to all consumers.