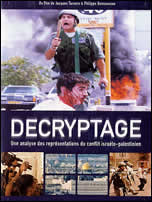 Decryptage, or “Decoding” in English, caused a sensation when it debuted in France in 2002, filling theaters with (often mostly Jewish) patrons dismayed at media treatment of Israel, “the epicenter of a world passion,” as one of the film’s interviewees put it.

American audiences too will find a riveting, thoughtful and relevant portrayal of how the Arab-Israeli conflict is presented.

His film decodes the bias, showing through interviews and illustrative footage just how the components of reporting combine to project a skewed picture of events. Television “images” have particular power to convey a message of Palestinian grievance and alleged Israeli cruelty. Specifically, the death of Muhammad al-Dura allegedly by Israeli soldiers, captured on film by a France 2 Television cameraman in October 2000 and transmitted around the globe became the preeminent symbol of the Palestinian cause. 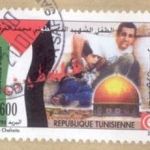 Decryptage presents the findings of an investigation into the al-Dura episode which indicate Israelis could not have killed the boy, on the basis of the soldiers’ line of fire from their location. But the truth of the event has been overwhelmed and superseded by the potent mythology that has taken root around the world about the child’s fate.

Tarnero also considers the power of “words” to instill in readers and viewers particular perceptions of events. He notes that at the outset of Palestinian rioting and violence Jerusalem’s Gilo neighborhood was called the “quarter of Gilo” in French media coverage. As Palestinian gunmen from Beit Jala shot at that “quarter,” prompting Israel to return fire, reporters gradually began referring to the “colony of Gilo.”

For the French public, “colony” is a singularly inflammatory term, evoking associations with France’s colonial brutality in Algeria, a record remembered with shame by many.

In a related and especially shocking instance of distorted word use, a French news report termed the savage stoning death of teenagers Kobi Mandel and Yossi Ish-Ran the “murder of two young Jewish colonists.” Mandel and Ish-Ran, residents of Tekoa in the West Bank, were left in a blood-spattered cave not far from their homes. As one commentator observed, the pejorative “colonist” terminology insinuates the boys, however young, were not entirely innocent, the crime against them less heinous. 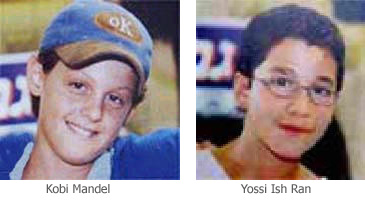 Tarnero considers the “representation of Israel” in the media, pointing out that more journalists per square foot descended on the Jewish state in the violent crisis than were reporting on any other story. Other conflicts and human suffering around the world were neglected in the rush to probe Israel.

Agence France Presse, the influential French wire service (carried in American newspapers as well), reflected this extreme disproportion. On the one hand, a speaker notes, AFP gave little attention – just 25 stories – to massacres underway in Algeria that took 280 lives, while there were 250 stories in the same period on the Israeli-Palestinian conflict in which 300 had died.

The documentary examines the details of the outbreak of the September 2000 rioting and false French media accusations against Sharon, as well as the role of the Palestinian Authority in using its media and schools to groom suicide killers filled with hatred of Israel.

Decidedly French in its unhurried pacing and attention to the observations of influential intellectuals, Decryptage’s investigation of the abuses of language and accuracy offer important insights for all audiences. Its message underscores the sentiment of famed author and philosopher Albert Camus that “to misname things adds misery to the world.”