PCATI, the original source of the false allegations, wrongly conflated the holding of Israeli detainees in outdoor prison cells (referred to as “cages”) with general accusations of ill-treatment targeting Palestinians.  Referring to  “caging” as an example of the alleged torture of Palestinian children, the NGO linked to an earlier Hebrew-language statement from the Office of the Public Defender, which in turn was based on interviews with Israeli detainees at a prison transit facility. (There was no mention here of any Palestinians.) Those detainees reported being held temporarily in outdoor cells during severe weather as they awaited transfer to their court hearings. The Public Defender’s Office gave the report to Justice Minister Tzipi Livni, who contacted the Minister of Public Security and the commissioner of the Israel Prison Service.  The practice, which had been in place for several months, was immediately stopped.  From the start, this was a domestic issue related to conduct by the prison system toward Israeli detainees of whatever background that was distorted into an allegation of torture and abuse targeting Palestinian children.

After CAMERA pointed out the discrepancy between PCATI’s accusation and the statement to which it was linked, the NGO acknowledged that Palestinians were never mentioned in the Public Defender’s report and posted a clarification to that effect on its website. CAMERA also contacted The Independent and Ha’aretz, who similarly corrected their stories.

CAMERA and its affiliates gathered additional evidence from multiple sources, including statements from the Public Defender’s Office, the Justice Ministry, the Israeli Prison Authority, as well as remarks about the matter by the Minister of Public Security at a Knesset session following the release of the Public Defender’s statemen, the Knesset Public Petitions Committee session that was referenced in the Jerusalem Post article and Hebrew-language reports about the matter, all of which made it undeniably clear that the short-term practice of temporarily holding detainees in outdoor holding cells, or “cages,” was never directed at Palestinian children or Palestinian adults.

For the past six weeks, since the Jerusalem Post article was originally published, CAMERA has appealed repeatedly to the newspaper’s journalists and editors, urging them to correct the misleading story, but to no avail.

Unfortunately, the Jerusalem Post’s inexplicable refusal to set the record straight has opened the door to the ongoing perpetration of an egregious falsehood, as evidenced by a vitriolic Australian documentary yesterday. The Australian Broadcasting Corporation documentary, “Four Corners,” promoted a narrative of brutal abuse by Israel of Palestinian children. It included the Jerusalem Post‘s story of holding children overnight in outdoor cages. At approximately 32 minutes into the broadcast, the documentary zooms in on the Post‘s print story, graphically underscoring just how much damage the uncorrected report inflicts: 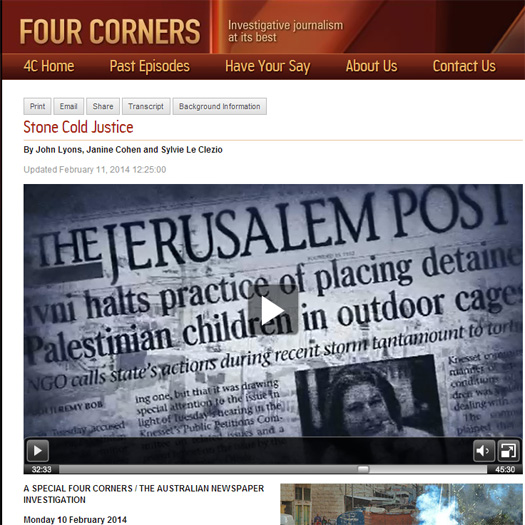 What exactly were the claims in the Jerusalem Post article that found a place in a sensationalist anti-Israel documentary, and how were they erroneous?

The Jerusalem Post’s head–e– “Livni halts practice of placing detained Palestinian children in outdoor cages,” subtitle – “The NGO alleges that the children were held in outdoor cages until Justice Minister Tzipi Livni intervened,” and article all indicate that caging was an Israeli practice directed at Palestinian children. According to the article:

An NGO on Tuesday accused the state of torturing Palestinian children suspected of minor crimes, including placing them in outdoor cages during the worst of the recent storm, and of other acts designed to terrify the children. The practice of placing the children in outdoor cages was halted when Justice Minister Tzipi Livni learned of it and immediately telephoned Public Security Minister Yitzhak Aharonovitch, telling him to end the practice. . . The NGO, the Public Committee Against Torture in Israel, said the issue [of placing Palestinian children in outdoor cages] was a longstanding one, but that it was drawing special attention to the issue in light of Tuesday’s hearing in the Knesset’s Public Petitions Committee on related issues and a recent report on the issue by the Public Defender’s Office. According to the Public Defender’s Office, it learned of the issue during a standard visit to a prison complex in Ramle at the height of the storm, with the children enduring freezing temperatures and inclement weather outside a transit facility…The children were to be held outside for a number of hours overnight after their arrest until they were to be brought to court in the early morning…

The Public Committee Against Torture said that the practice was just one example of the torture and ill treatment of Palestinian children by law enforcement.” [emphasis added]>.פ<

While the NGO continues to maintain that Palestinian minors were among those detainees who were temporarily held in outdoor cells, it has clarified that:

[t]he Public Defender’s statement to which we linked regarding this deplorable practice, which has since been ceased, did not mention the word Palestinian. PCATI had been told that this practice did include Palestinian detainees including minors (which is why we included the subject in the statement).  We value that this inconsistency was pointed out, however we also believe that in pointing out inconsistencies of this nature it is important to always dig deeper for the tr
uth…

We further point out that although that Public Defender’s report did not mention Palestinians specifically we thought it important to further understand both what happened and to seek further clarifications. We understand that the linked statement to the Public Defender’s report reflected an event in particular as contrasted to the longer term use of this practice.  PCATI has learned from that the IPS, when asked about the circumstances surrounding the report that it did not distinguish between nationality and age and that there were people in custody who are also from the OPT. Therefore, there is no way out of saying that Palestinians too have suffered under this practice.  That is, Palestinians, albeit not security detainees, were subjected to being held under these conditions and there were Palestinian minors as well.

Clarification by the Public Defender’s Office

Dr. Yoav Sapir, of the Public Defender’s Office, who wrote about the practice in the first place, responded to CAMERA’s query about the veracity of the Post allegations regarding such a practice being applied specifically to Palestinian children:

It seems to me that the [Jerusalem Post] article conflates a number of different things that are unrelated to each other. I haven’t read the report from the Public Committee Against Torture and I don’t know what was written there. The report from the Public Defender’s Office that is mentioned in the article relates to detainees at the “Ayalon” transit point before they were brought to the court, and was written following interviews held by representatives from the Public Defender’s Office with prisoners who were brought to the court house in Lod. To the best of our knowledge, the prisoners held under the conditions described in the report were not necessarily minors and not necessarily Palestinians. Even though the report was unusual in its severity, it made no mention of “torture” which connotes the deliberate causing of suffering. We welcome the fact that following the report, the holding of prisoners in the manner described by the report was immediately stopped.

Clarification by the Justice Ministry

This is about [facilities in] territory within the State of Israel and about detainees who were Israeli residents and citizens – not specifically minors and not specifically Palestinians, as was claimed in various publications.

In an additional statement, Ben-Moshe noted:

In response to your further request by telephone, we wish again to clarify that the report deals with an inspection done within Israeli territory regarding detainees who were brought to court hearings from different detention facilities in the [geographic area] of the center. There is no data base to ascertain the identity and citizenship of each and every one of the detainees, but it is absolutely clear that the conditions described apply to all detainees brought to that place, Jews and Arabs, minors and adults.

Clarification by the Israel Prison  Service

The response of the spokeswoman of the Israel Prison Service further repudiated the false claims, including one in which the inspectors were erroneously reported to have based their report on a surprise visit to the facility. Sivan Weizman wrote:

Further to the Public Defender’s report about keeping detainees in holding cells (“cages”) at the detention center in Ramle.

First, I would like to emphasize that the inspectors who wrote the report did not visit the facility at all, but prepared it (the report) following their visit to the Lod court, and relied solely on their conversations with prisoners and detainees.

It is important to point out that the holding cells that were discussed serve as a transition point between prisons, or between prisons and the courts and therefore serve the entire prisoner population without any distinction as to their residency status (Israel/Palestinian Authority) or the type of offense (security/criminal), and mainly applied to criminal convicts.

The length of time in which the prisoners were kept at the location was short, and no longer than two hours.

Similarly,  we would  like to point out that following the report, the use of the location was immediately discontinued and it was renovated and adapted.

Public Security Minister Yitzhak Aharonovitch also addressed the issue of detaining people in “cages” at the 93rd session of the 19th Knesset held on Dec 18. (See here for the minutes.) Neither he nor any other Knesset member ever mentioned Palestinians in relation to the policy or the population that was affected. It is also noteworthy that the minister objected to the term “cage” itself, explaining that these were temporary holding cells with bars.

A video of  the Knesset Petitions Committee session, which the Jerusalem Post article implied addressed the practice of caging in a discussion of detaining Palestinian children, was reviewed in its entirety.  No reference was made at any point to a policy of holding detainees in cages.

Corrections in the Media

Media outlets generally considered quite hostile to and critical of Israel have been quickly correcting the story. Shortly after PCATI clarified its statement, CiF Watch, a CAMERA affiliate, prompted a second correction at the Independent regarding its Jan. 1 article on the subject.

The Independent removed any reference to Palestinians in both the headline and the article itself, and appended the following to the bottom of the article:

Also thanks to CiF Watch, the Independent had earlier corrected the false claim that the detainees had been detained “for months” in the outdoor facility, when in fact they were held there for hours. (This error had not appeared in the Jerusalem Post article.)

Ha’aretz, too, deserves appreciation for its rapid corrections of the unfounded claim that Israel had a practice to place Palestinians in cages. In an article Friday comparing Israel to slaveholders, Eva Illouz wrote:

In a widely publicized news story, PCATI found that children were also the object of treatment that is equivalent to torture, and that the IDF engages in such practices as putting Palestinian children guilty of minor crimes in cages (for two days), exposed to the cold in the deep of winter.

Within a day of receiving communication from CAMERA, Ha’aretz removed the false claim, and appended a correction:

In a separate article today, Ha’aretz repeated the falsehood, reporting:

CAMERA again followed up with Ha’aretz editors, who once again within hours set the record straight, amending the text and appending a correction as follows:

In communication with CAMERA, the Jerusalem Post has maintained that Palestinian children were among those detainees who had been held outdoors during the months the practice was in place.  Therefore, there were no plans to correct the story or issue a clarification.  But had the newspaper’s story been just about an objectionable Israeli domestic policy that may have included but did not spec

Jerusalem Post should now reconsider the consequences of not clarifying its misleading article and at last set the record straight.