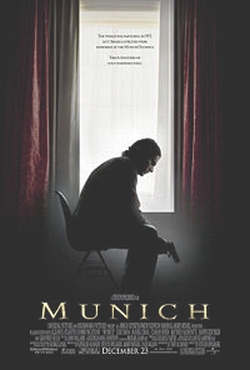 Steven Spielberg and an army of well-paid consultants and spinmeisters are pulling out all the stops to promote Munich and fend off damaging criticism of the movie about the murder of Israeli Olympic athletes and the effort to track down the crime’s masterminds. The campaign has even included courting family members of the slain men for endorsements to blunt a gathering storm of negative commentary from the likes of David Brooks in the New York Times, Leon Wieseltier in the New Republic and Andrea Peyser in the New York Post.

Briefly, the movie presents, via pulse-pounding scenes of kidnaping, death, stalking and more death, the message that Israel was brutal, bungling and immoral in its reaction to the massacre. True, the hostage-takers were also brutal; but dispossessing Palestinians, we soon learn, lies at the root.

Cultured Palestinians passionately explain: “We are for twenty-four years the world’s largest refugee population. Our homes taken from us. Living in camps. No future. No food. Nothing decent for our children.”

In Munich there are no Palestinians clamoring for the destruction of Israel – as all Palestinian groups did then and, regrettably, leading groups continue to do today. On the contrary, in a contrived encounter between Avner, the movie’s lead, and a PLO member, the latter insists he simply wants a homeland.

He also blames Jews for turning the Palestinians “into animals” and charges them with exploiting guilt over the Holocaust.

In all of this one sees the biases of Tony Kushner, the radical playwright brought in by Spielberg to reshape the script. Kushner has repeatedly called the creation of Israel a “mistake,” blamed Israel for “the whole shameful history of the dreadful suffering of the Palestinian people,”and advocated policies to undermine the state.

Israelis in the film, including Prime Minister Golda Meir, do make their case. But the language is often self-incriminating and vengeful. Meir says:

I don’t know who these maniacs are and where they come from. Palestinians- they’re not recognizable. You tell me what law protects people like this…Every civilization finds it necessary to negotiate compromises with its own values.

The charge that Israel believed targeting terrorist leaders compromises its values rather than affirms its obligation to seek every means to defend itself against aggression is pure Hollywood concoction. But spiraling self-doubt about the use of force is central to Munich, with one team member, an ambivalent bomb-maker who eventually blows himself up, lamenting:

We’re Jews, Avner. Jews don’t do wrong because our enemies do wrong…we’re supposed to be righteous. That’s a beautiful thing. That’s Jewish…

Thus, not only, in the film’s account, was it futile to assassinate terrorist masterminds, because new and worse replacements sprang up to escalate the violence, but eliminating terrorists ostensibly destroyed the souls of the Jewish hit team.

During the movie’s production, numerous Israelis with knowledge of the actual events disputed Spielberg’s central themes. But the Hollywood director, along with Kushner, ignored them and insisted on their own dark story.

In fact, historical accounts of Israel’s decision to target leaders of Black September, the group responsible for Munich, emphasize that the assault at the Olympics was part of a worsening series of terrorist attacks against Israel in 1972. Lod Airport had been struck twice in May with 32 killed.

Only days after the September 5 Munich atrocity, an Israeli official was shot in Brussels, and two weeks later a letter bomb killed an Israeli in London.

Any nation supine in the face of such intensifying terrorism invites ever more fearsome attack. Yes, Israel’s new counter-campaign was reprisal for the Munich murders, but it was aimed at fighting back against a broad terrorist threat. What the various teams dispatched by Israel sought to do was standard in its general goal: Shift the balance and force the adversary onto the defensive, disrupting operations, planning and command structure.

None of this common sense about self-defense and the context in which the Olympic massacre and Israeli reaction occurred are part of Munich.

Instead, Israel’s action battling its adversaries is cast as aberrant, bloody and counterproductive. It is no different from the assault of the terrorists and ostensibly spawns far greater violence.

Thus Munich is not fictionalized fact, but a falsehood at its core.

Small falsehoods too promote its thesis of Israeli culpability. For instance, Meir is said to have shunned attending the murdered athletes’ funerals for fear of being booed because she refused to negotiate with the terrorists – yet as the Jerusalem Post reported one week after the killings, a poll found her the most popular figure in the nation. Meir as the war-like Israeli, refusing to settle matters in peaceful dialogue, fit the picture, but not the facts.

The movie concludes that Israel should have, in Avner’s recommendation, “arrested” the terrorists “like Eichman.” And, perhaps inspired by Kushner’s theme of the mistaken existence of Israel, an embittered and hounded Avner abandons his homeland for all-American Brooklyn.

Munich offends on other counts. A leitmotif linking Jews and money will make more than a few viewers wince. A Mossad handler growls: “I want receipts!”

We’re not the Rothschilds, he says, just a small country. “We need receipts. You got me? Whatever you’re doing somebody else is paying for it.” Or: “A Jew and a Frenchman – we could haggle forever.”

In other coarse invocations of supposed Jewish banter and attitudes, a team member demands a comrade drop his pants to “see if he’s circumcised” when the teammate doesn’t understand the need for Jewish violence. An argument among the team has one Israeli shouting: “The only blood that matters to me is Jewish blood!”

This and much like it is what passes for deep dialogue by two of America’s leading entertainment lights. Indeed, it is stunning to watch Munich and realize that its director brought Schindler’s List to the world. Where that was artistry drawn from truth, Munich is cinematic manipulation rooted in lies.

Evidently, exploring essential truths about Jews murdered 60 years ago by a regime that no longer exists and is widely reviled is one thing.

Defending the truth about Jews who, over the last half century, have continued to be targeted for murder by Palestinians, Arab states, and in recent decades Iran, and whose stalkers have enjoyed
the support of the U.N., scores of NGO’s, and perhaps attendees of Hollywood dinner parties, is quite another.