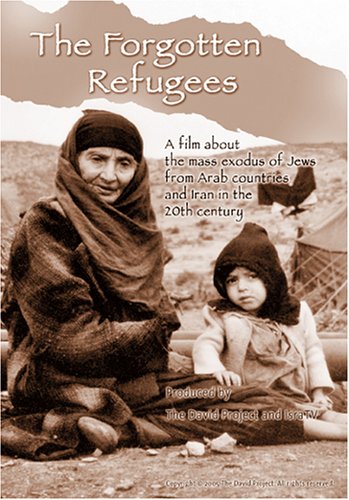 The Forgotten Refugees (2005)
Directed by Michael Grynszpan
Produced by The David Project and IsraTV
49 minutes, English

While Palestinians may get the most press, they are not the only refugee population in Israel. Between 1947 and the present day, more than one million Jews were driven out of their homes in the Muslim world. These Jews, many of whom had to leave with only what they could carry, had lived in the Arab world for thousands of years before they were violently forced to leave. Instead of choosing to stay in refugee camps for 50 years, these Jews worked swiftly to integrate themselves into the societies of Israel and the United States, and thus their stories have been largely lost. However, two recent films have begun to try to tell the story of the persecuction, suffering, and ultimate destruction of these Jewish communities. These films add some much-needed perspective to the Arab-Israeli conflict by pointing out that the Palestinian Arabs are not the only refugee population in that part of the Middle East.

“The Forgotten Refugees” is an exceptional documentary film that addresses one of the least recognized refugee groups of the 20th century: the nearly one million Jews from Arab countries and Iran who were either forcibly expelled from their homes or otherwise compelled to leave. Commissioned by the David Project for Jewish Leadership in Boston, “The Forgotten Refugees” is the centerpiece of a campaign by that organization to educate the world about the destruction of thousands of vibrant Middle Eastern Jewish communities.

The film starts by giving a brief history of the settlement of Jews in what are now Arab lands. Jews first left the land of Israel in the sixth century B.C.E., after the destruction of Solomon’s Temple. Most of these Jews settled in Babylonia, which is present day Iraq. This was more than one thousand years before Islam was even founded. At the end of the Babylonian exile, many Jews chose to stay in Babylonia, and they would remain there for 2,500 years.

Jews generally prospered in Arab lands in the early years, and after the rise of Christianity, Jews fared significantly better in the Arab world than in Christendom. However, that is not to say that Jews were given equality. On the contrary, Jews along with Christians were granted the status of dhimmi, or protected peoples of the Book. Dhimmis were allowed to practice their religions without being killed, but they had to pay a tax and were subject to a number of humbling prohibitions, including the wearing of distinctive clothing (the first yellow star badges).

This semi-comfortable coexistence persisted until the 20th century, when the collapse of European colonialism begot a fervent Arab nationalism. Arab nationalist leaders found Jews useful as scapegoats to help galvanize their population. “The Forgotten Refugees” includes testimony from dozens of Jews who lived through these dark days in Arab lands. These Jews, who almost all moved to Israel, describe incensed mobs chanting “death to Jews” and rampaging through the streets of Cairo and Tripoli murdering innocent Jews.

In one segment, two Israelis, formerly Egyptians, explain how laws were passed that decreed all Jews to be enemies of the state and forced them to emigrate. This surge of violence coupled with the passage of Nuremburg-like laws in many Muslim countries resulted in hundreds of thousands of Jews leaving the homes their families had inhabited for thousands of years. The testimony of these survivors puts a personal, human face on the mass migration of these Jewish populations.

Fortunately, after 1948, these Jews were able to move to Israel. The film goes on to recount the story of the ma’abarot, the Israeli resettlement camps of the late 1940s and early 1950s that housed primarily Mizrachi Jewish populations. The refugees had all of their property and assets seized by the Muslim governments they had fled, and had to start their lives afresh in the camps in the south of Israel. Footage of these camps is coupled with a brief look at Moshe Katsav, the president of Israel, who lived in one of the camps as a young boy. It is an inspirational segue and a testament to the perseverance of these brave people who had everything taken away from them.

“The Forgotten Refugees” is an excellent film that seeks not to indoctrinate but only to educate. The interviews with many Mizrachi, or north African, Jews make clear that the question of identity and allegiance is still a troubling one for many of them. The viewer can see that these people are pained by the scorn directed at them by their longtime Muslim neighbors. Understandably, these Jews continue to feel a deep connection to their traditional Arabic food, music, and language.

The contemporary footage of crumbling synagogues and empty Jewish quarters throughout the Arab world is a sad record of the complete eradication of once vibrant communities and the separation of these Jews not only from their land and possessions but also in many ways from their own identities. “The Forgotten Refugees” should be required viewing for any would-be experts on the Arab-Israeli conflict who preach about the plight of refugees in the land of Israel.