Maya Zinshtein and Abraham Troen, the Israeli filmmakers who directed and produced “‘Til Kingdom Come,” which portrays American Evangelicals as warmongers intent on depriving the Palestinians of a state and bringing about Armageddon in the Holy Land, did more than fabricate a quote and attribute it to former U.S. President Donald Trump to sell their false narrative.

They withheld information from their film’s audience that demonstrated that American Evangelical leaders were part of the effort to achieve a normalization agreement between Israel and the United Arab Emirates which became known as the Abraham Accords when it was made public on August 13, 2020.

Both Haaretz and the Jerusalem Post published articles detailing the role American Evangelicals played in bringing about the normalization agreement in articles that can be read here and here.

On Aug., 21, 2020, eight days after the news of the accord between Israel and the UAE (and Evangelical involvement in this agreement) broke, the Twitter account for Zinshtein and Troen’s film, “’Til Kingdom Come,” posted a now deleted Tweet that declared: “Something that nobody is talking about: the #Evangelicals are also intermediaries (!) in the #UAEIsrael agreement.”

The tweet linked to a currently unavailable clip of a 2019 interview with Rev. Johnnie Moore talking about the role former president’s Evangelical Advisory Board” played in bringing about the deal. The Tweet then stated, “So what’s next? #Iran.”

This now-deleted Tweet is referenced in another Tweet from Zinshtein’s personal account in which she declares, “In 2019 @JohnnieM gave me an amazing interview for @KingdomCome_doc. He definitely knew what he was talking about #UAEIsrael.” 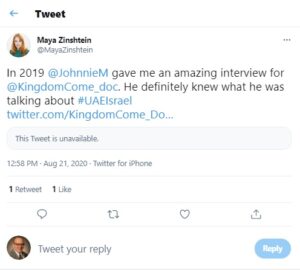 Probably because it provided information that undermined the entire premise of Zinshtein and Troen’s documentary — that American Evangelicals were intent on bringing about Armageddon in the Holy Land to usher in the second coming of Christ.

This message was repeatedly emphasized in numerous Q&A sessions that took place after online showings of “‘Til Kingdom Come” during which Zinshtein repeatedly described herself as an investigative journalist.

Zinshtein and Troen’s caricature of war-mongering Evangelicals serving as spoilers to the peace process was conveyed directly in the film with a clip of Avram Burg, a former Israeli cabinet minister. In the clip Burg declared on Israeli TV that he did not want money from the International Fellowship of Christians and Jews, led by Rabbi Yehiel Eckstein, because it came from warmongering Evangelicals.

“I don’t want Rabbi Eckstein’s money,” Burg said. “The funds are donated by warmongers who are encouraging war between Israel and the Muslim world.”

In fact, Evangelical leaders promoted the Abraham Accords and helped engineer normalized relations between Israel and the United Arab Emirates by encouraging Israeli Prime Minister to delay annexation of territory in the West Bank. This is exactly the opposite of the narrative offered in “‘Til Kingdom Come.”

Filmmakers Maya Zinshtein and Abie Troen knew about the role American Evangelicals played in bringing about the Abraham Accords, but that did not stop them from portraying Evangelicals as promoting Armageddon in the Holy Land.

Writing in Documentary Magazine in 2006, documentarian Bill Nichols suggested that filmmakers adopt a guiding statement to their work that declares: “Do nothing that would violate the humanity of your subject and nothing that would compromise the trust of your audience.”

Clearly, Zinshtein and Troen have compromised the trust of their audience, which includes people who saw the film via various Jewish film festivals through the United States.