For many around the world, the coronavirus pandemic is understandably cause for grave concern. But while some worry about what COVID-19 could do to their community, others appear more interested in what it might do for their cause. These dogmatic activists look to seize on the scare by, essentially, appending the phrase “coronavirus” to the same propaganda they’ve long pushed.

Consider IfNotNow’s recent petition attacking Israel. The petition demands Israel eliminate restrictions on the Gaza Strip, which are meant to prevent terror groups there from obtaining weapons and other items that could bolster their war-making capabilities. As always, IfNotNow wants an end to those restrictions. And as is so often the case, the anti-Israel group’s misleading claims are meant to inflame rather than inform.

The petition’s main point, that blame for any deaths in Gaza as a result of the virus should “lay squarely with the Israeli government,” is disturbingly reminiscent of the medieval antisemitic charge that the Jews were responsible for the bubonic plague. It is a bleak fact that the COVID-19 kills. As IfNotNow was preparing the groundwork for Israel to be held responsible for Gazans who succumb to the disease, the coronavirus had already killed thousands in Italy, China, and Spain, and hundreds in Iran, France, the United States, United Kingdom, and Netherlands. It has taken lives in Switzerland, Germany, Belgium, Sweden, Denmark, Canada, Norway, Luxemburg, and dozens of other countries. With even the world’s richest lands beset by shortages of intensive care beds, respirators, and other needed supplies, it seems unlikely that any country can avoid burying victims of the pandemic.

But IfNotNow’s mission is to attack Israel, and the Coronavirus offers the group another opportunity. A closer look at its petition reveals the usual falsehoods, distortions, and omissions on which the anti-Israel propaganda campaign so often rests.

The petition, though written before a single case of COVID-19 was confirmed in the Gaza Strip, insists that Palestinians there “appear to be on the precipice of catastrophe.”  Ironically, Israel’s limitations on the movement of people through its border crossings with Gaza likely slowed the introduction of the coronavirus to the territory. It was one day after the petition was published, as Israel was dealing with over a thousand cases, that the disease was first introduced to the Gaza Strip, when according to media reports two Palestinian travelers returned to Gaza from Pakistan, via Egypt. But IfNotNow and other anti-Israel advocacy groups want people to blame only Israel for any damage done.

There is, of course, a reasonable likelihood that Gaza will be severely impacted by the virus. If affluent northern Italy is susceptible to devastation, the poorer and more crowded Gaza Strip, which for the past 15 years has been ruled by Hamas, an internationally designated terror group, is certainly not immune. At the moment, though, the talk of a territory on the brink of catastrophe is not shared by Gaza’s general director of primary care. “There is no need for panic at this stage,” said the director, Medhat Abbas. “We can deal with existing cases and limited numbers,” Abbas explained, “but if the pandemic increases, as happened in some countries, we will need international intervention.”

The entry of infected patients through Egypt’s Rafah Crossing belies IfNotNow’s false claim that “the Israeli government … controls what goes in and out of Gaza.” Hundreds of people a day pass through that Egyptian-Palestinian border crossing. And hundreds of truckloads of goods enter Gaza from Egypt via that same crossing, notes the United Nations Office for the Coordination of Humanitarian Affairs.

The international community must do everything it can to protect everyone in the world from this pandemic — and this must include the stateless Palestinians in Gaza, whose lives are controlled by the Israeli military. The Israeli government must live up to its legal obligations as an occupying power by providing Palestinians with the medical supplies they need to survive this pandemic. …

Sign the petition and demand that the Israeli government protects Palestinians in Gaza by lifting the blockade and immediately delivering medical supplies — such as Coronavirus test kits, ventilation equipment and medical masks — to Gaza.

There is much to take issue with:

The passage’s main point, though, is its insinuation that Israel doesn’t allow medical supplies into Gaza. This is abjectly false. Israel has already supplied COVID tests to the Gaza Strip and, as always, transfers medical supplies to the Hamas-ruled territory. As the New York Times has put it, “the import of medicine is not restricted.” 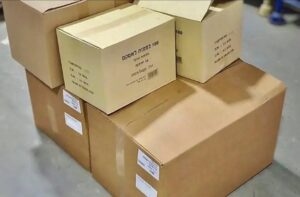 An Israeli shipment of medical goods for Gaza.

Unsurprisingly, IfNotNow avoided mentioning that Hamas in the past has even turned away shipments of medical supplies from Israel. How could the advocacy group possibly acknowledge this stunning fact? They don’t want readers to know that Israel permits medicine into Gaza, and don’t want them to think the territory’s government might have some responsibility for the condition of its residents.

In the group’s one-dimensional world, everything is Israel’s fault. “Because of the Israeli blockade, Palestinians in Gaza not only have fewer medical supplies, but many of them do not have access to clean water,” the petition claims. In the real world, though, blame rests with the Palestinian Authority and Hamas, as even critics of Israel admit.

IfNotNow lays on additional falsehoods: it claims Israel has a “policy of indiscriminate bombing” of Gaza, an apparent reference to the country’s attacks on Hamas and Islamic Jihad targets during wars set off by those groups’ firing of indiscriminate rockets at Israeli (Jewish) civilians. “Israel’s military controls the land” in Gaza, INN claims. It doesn’t.

The Gaza Strip has “one of the highest population densities in the world,” they say. With about 13,000 people per square mile, the Gaza Strip is, without a doubt, very densely populated, and that is cause for concern with a highly contagious disease. But it’s not even the densest area in the region, nor even close. Just a five-hour car ride from the Gaza Strip, for example, is the Cairo metropolitan area, where people are packed about twice as densely into an area larger than the Gaza Strip.

The urban areas of Lagos, Shenzen, Rio de Janeiro, Istanbul, Buenos Aires, Karachi, Kolkata, Guangzhou-Foshan, Osaka-Kobe-Kyoto, Beijing, Mexico City, Sao Paulo, Shanghai, Manila, Delhi, Seoul, Jakarta all have at least similar, and often significantly higher, population densities than the Gaza Strip, with the tightly packed sections of most of those megalopolises stretching over vastly larger expanses of territory than the Strip. Dakha, which is about the same size as the Gaza Strip, has nearly 10 times more people.

And Gaza City, the largest and densest city in the Gaza Strip, is less dense than Yaounde, Solapur, Hyderabad, Irbil, Casablanca, Pyongyang, Saharanpur, Patna, Douala, Dakar, Homs, Alexandria, Rajkot, Mbuji-Mayi, Bogota, Kananga, Chittagong, Hama, Aleppo, Siliguri, Vijayawada, Moradabad, Ahmadabad, Kinshasa, Bukavu, Hong Kong, Mumbai, Surat, and Mogadishu, none of which are smaller in area, and many of which are significantly larger, than the Gaza Strip.

But in the realm of IfNotNow activism, proportion and nuance aren’t the point. The point is that the world is threatened by a lethal virus. And IfNotNow seems to want people to believe that, in the Middle East, the virus is actually Israel.

March 24 correction: An earlier version of this article incorrectly stated it was this week that Hamas turned away medical aid from Israel. The incident described actually happened in 2018.